A Trip to Valençay

One of the great things about owning a classic car - especially a particularly attractive classic French car in France - is that people are happy to see you.

Yesterday we went to Valençay in Célestine to attend a car Bourse d'Echange (swap meet) at the auto museum. On Thursday we were told about the meet, and that the team from "Traction Universelle" would be there - including the man who knows all about Traction electricals. We have been meaning to join the club (the French equivalent of the Traction Owners Club) ever since Célestine arrived in the family, but have just not got around to it.

Jean-Louis twiddling with the carburettor. 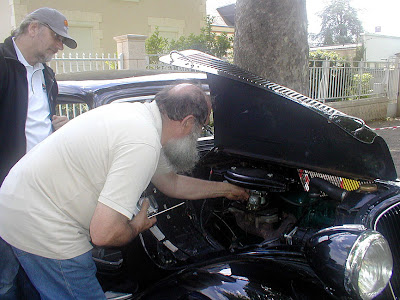 We weren't sure about taking Célestine though - the weather forecast showed a storm warning, and Traction Avant windscreen wipers aren't all they could be: they work, they even clear the windscreen, but they just don't engender total confidence. We ummed and ahhd for a while, decided to take the Renault - then took Célestine anyway.

We are glad we did - as we arrived we were directed (and guided) into a parking place right next to the gate, which meant that everybody attending had to walk past our car - many stopping to take photos. It also meant that all the Tractionistas who visited the Traction Universelle stand (which was just inside the gate) stopped to say hello.

A line of lovely cars, including a stunning cherry red Traction. 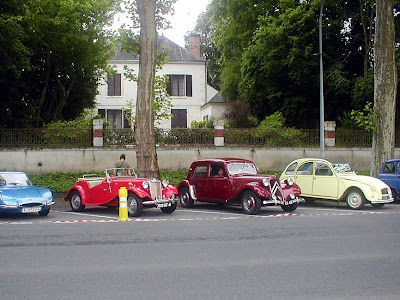 After perusing the stands for any spare parts or accessories that might come in handy we paid our subscription at the Traction Universelle stand. Jean-Louis Gargot was manning the stand. He is known as Docteur Traction, someone who can fix anything on a Traction. We discussed the wiring of Célestine's commodo (headlight switch), which we think is wired back to front. Then he took a look under the bonnet and played with the carburettor. According to him, what she has is a reconditioned unit which is very difficult to regulate, which is why she idles a bit fast. He also noticed that the small pipe that comes off the manifold under the carburettor was jammed, and that the rubber shoe that the end of the engine block sits in against the firewall had perished and the engine is vibrating a bit much.

He was most interested in the fact that we have had the dynamo replaced by a 6 volt alternator, and took several photographs. Then he introduced us to Dan and Marie-Chris, who have several Tractions, including a 1954 Traction called Camille, almost identical to Célestine, that they have taken to Australia and Africa. We had lunch with them and heard all about their voyage from Sydney to Darwin. Later we met Gilles and Elisabeth and got Jean-Louis to swap Célestine's failing clockwork indicator mechanism for an electronic one that he has developed. Gilles has one on his Traction and highly recommended it. Gilles is one of those people who has a tool for everything in the back of his car, and lent us the necessary spanner for disconnecting the battery while the changeover was effected. This was offered after Jean-Louis' expression of quickly disguised incredulity that we couldn't produce a spanner from Célestine's boot (we are clearly not quite serious enough yet). So now Célestine's indicators have gone from a lethargic fading in and out to a spritely flicking on and off. 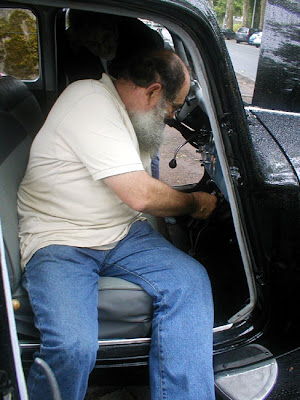 We drove home in the rain well satisfied to have made several new friends and learned quite a bit about Tractions. When we got home Susan processed another 3kg of cherries (that makes a total of 14kg from one tree so far). She made jam, gave some fresh cherries to our neighbour Sylvie, put some aside for eating fresh ourselves and made the rest into crumble. She's been using the special preserving sugar, but is quite disappointed by the results. Either the instructions on the packet or the product itself is rubbish, as the jelly she made a couple of days ago is not really firm enough (although it's delicious), and it looks like the jam is not going to set at all. The special sugar is more than twice the price of regular sugar too.

Email ThisBlogThis!Share to TwitterShare to FacebookShare to Pinterest
Labels: Food and Drink, le Jardin, Markets, The Car and Driving

Not looking too closely, I thought Simon had just put all his hair around his chin! LOL-MDR

A most profitable visit Simon. Mixing with other like minded people is always a bonus.
I think over the past years I have changed most parts on a Traction. Driveshafts, second gear cog, wheel bearings, radiators and even motors - no more,better to pay the experts these days.
Leon

Sounds as though you both had a very enjoyable day, it is always good to have a network of people who are experienced and helpful with advice when you have a "Grand Dame" in the family. Did anyone have an alternative to the not so effective wipers ? it would be good if you could interchange some other wipers for "serious weather" and still have the genuine ones for when she needs to be looking "authentic".

Sounds as though you both had a very enjoyable day, it is always good to have a network of people who are experienced and helpful with advice when you have a "Grand Dame" in the family. Did anyone have an alternative to the not so effective wipers ? it would be good if you could interchange some other wipers for "serious weather" and still have the genuine ones for when she needs to be looking "authentic".

Leon: with the amount of "mince!"ing that was going on, I am glad I didn't attempt it myself!!

Margaret - it's a thought, but they are so tiny I dont think I could find a modern one to fit. I usually have RainX on the windscreen, but I hadn't got around to reapplying it.

I'm very interested in the lemon yellow 2CV next to Celestine's older relative.... it appears to have the lights set into the wings!!
Very different.

Cherry jam doesn't set! Not enough pectin, and I've never had any luck with preserving sugar. Thin the fruit on your apple tree and make Cherry and Apple. Or Cherry and redcurrant.

What a great day that sounds, and Celestine got to meet her long-lost cousin Camille. I'll bet they had some interesting discussions in the parking lot when you weren't looking. And those other cars look gorgeous, too.

Sisusmonan [work it out!]...
The 2CV isn't really a small car [especially when parked next to an ORIGINAL Mini or a Fiat 500... and when I was getting the spare engine and gearbox the other day I was standing next door to a stack of chassis[s] and they always look very long... but they are very narrow. We'll have to park gytha next to Celestine and see what the differences are.

Paulita & Jocelyn: I know cherry has a reputation for always being runny. We managed to make good cherry jam last year with the sour cherries, adding some lemon. I bought the preserving sugar because a) there had been a run on sugar in the supermarket and by the time I got there, there was no regular sugar left (everyone making cherry jam at the same time) and b) Ken tried it last year and was really pleased with the results.

I reboiled the jam, reducing the liquid and got it to jam setting temperature. There was so much sugar in it I'm sure the added pectin has had almost nothing to do with its now excellent set. The runny jelly I made earlier is so delicious I'm not going to meddle with it, and do as Jocelyn suggests.