There is no need to do any housework at all. After the first four years the dirt doesn't get any worse.

The thing is, he wasn't thinking long term.

On Friday we removed a small section of the granary floor so that the small set of steps up to the floor level would fit better. In order to neaten things up, we decided to put a little bit of concrete under the steps, which meant moving some of the loose sand that was sitting there. I grabbed a shovel and dug - then dug some more. The sand was actually very fine dust and there didn't seem to be an end to it, so I grabbed a broom handle and had a little prod about to find the floor level. 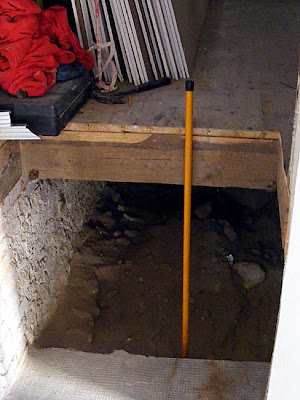 You can imagine my surprise when the handle went in 30cm (12 inches).

I then kept on pushing, much to the amazement of Susan and Stéphane, until I could push no more. Not because I hit the floor, but because the stick was in danger of disappearing. That is 1.3 metres (4'4") of dust.

Yes - that little black thing is the same handle. 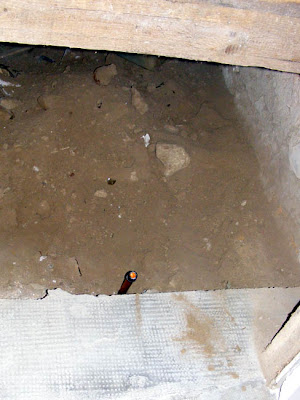 We assume it is old grain dust. It has never shown any propensity for blowing into the house so for the time being we are going to leave it there, but it will now be behind a wall. One day we may lift more floor to find out what is actually under there, but that is for a time when we are feeling brave (and have less to do).

Even though it says that you posted at nine, it's not until 9:18 the new post appeared. Since we are now in the same time zone [fuseau horaire] I don't understand the discrepancy. Blogger is a LIAR!

Maybe one of these days you'll find a treasure of artifacts, bones or what have you! It might be worth your while to dig under the granary floor!

Simon, When you've removed all the dust, the cavity under the floor will make a nice and ideal space to put those 'witlof' of Belgian endives roots that you're growing in your garden from the seed you bought last year! Martine

I would be digging that out and in would go my wine cellar. Interesting secret place. Diane

Simon, could there be a room down there, with a floor at some level? Maybe your place is twice as big as you thought? Can you have it all vacuumed out?

I believe that Quentin Crisp had to climb onto a chair to put his trousers on. It sounds like your dust is deeper than his.

Hee hee. Maybe there are dinosaur bones down there?