To have a Laundry*

When we bought this house, the toilet (non-functioning and, frankly, disgusting) was in the laundry - a room next to the kitchen. This is not uncommon in France, most of the houses we looked at had either the toilet or bathroom directly off the kitchen. To anyone who grew up with Australian building regulations this is just plain wrong! 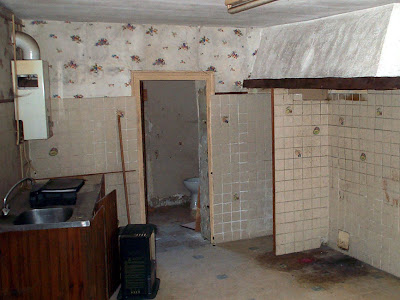 When we had the toilet reinstalled it made sense to have it put back in more or less the same place because the pipework was there. We didn't like the idea, but it was by far the fastest (and also the cheapest) way to go. Our plan was, however, to put up a stud wall dividing the laundry and making a dedicated WC.

At last this work has commenced. We have finished insulating the laundry, so tomorrow we build the frame and put in the door which makes our downstairs toilet a lot less public place. The only drawback to this will be that the toilet will have no window - the room is too small and there are too many pipes and posts on the external wall for us to squeeze a window in. To counter possible issues this may cause we are putting in an extractor fan which runs in conjunction with the lights, then stays on for 2 minutes after the lights are turned off.

This meant drilling a big hole in the wall, made easier by borrowing Alex's diamond tipped big holey drilling thing (diameter 100mm) which cut through the bricks with very little effort and left a nice neat hole.

Drilling the hole. You can see why I
found it such a simple task. All this means that the laundry will be a smaller room than one would hope for, but it will still be big enough to work as a laundry, and the insulation should mean that the window (and the people looking out of it) doesn't freeze up any more.

I think you would call that minute laundry room a "buanderie."

CHM: Tout à fait. That's what I have been calling it.

It's a lavoir. Therefore in the title we have a lavoir/avoir incident.

No-one told me about buanderies until quite recently, and I am learning only one word for each thing. That way I can speak of more things, having limited memory capacity spare. Otherwise I would have to start forgetting trivia...

Simon, I think lavoirs are a thing of the past. They have been replaced by laveries, which implies they're set up with those modern contraptions called washing machines. Buanderie has a more intimate meaning, as it is more private.

I would call a buanderie a laundry room. A lavoir is one of those little buildings on a river or stream where you beat your clothes on a rock or something. They are now obsolete.