Saffron Crocus sativus has been cultivated since the Bronze Age but it does not exist in the wild. The bulb is grown from southern Europe to Kashmir, mostly by small producers, but the plant is sterile and does not set seed. It reproduces by multiplying bulbs (very rapidly, if the saffron in our potager is anything to go by) but its genetic variability is therefore very low.

Part of last autumn's saffron crop on the outskirts of Preuilly. 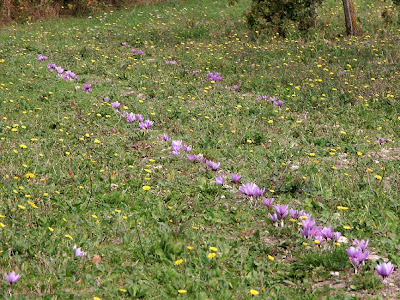 Crocusbank, a project funded by the European Union and headed by a Spanish scientist, has been set up to conserve the saffron crocus and allied species. This includes trying to identify the wild ancestors of saffron to recreate the sequence of hybridisation that resulted in this valuable spice, then increase the genetic variability by making new crosses to increase disease resistance and yields.

The beautiful saffron flower with its precious red
stigmae, which form the spice. 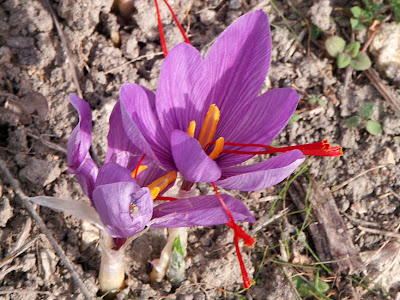 There are 5 reasons the project was set up:

1. Saffron is very valuable and the harvest very small with high labour costs. This means it is commonly adulterated and other substances fraudulently sold as saffron. 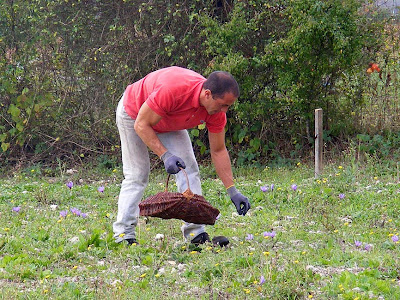 2. Saffron as a crop in Europe is in danger of extinction (it is no longer grown in England, where it was once grown in great quantities in Essex). About 20 countries worldwide now grow saffron commercially, including France and Australia. Spain was traditionally the world leader, but in recent years about 80% of the 205 tonnes produced annually comes from Iran. Spain's output has dropped to a mere half a tonne. By comparison France, which is currently experiencing a revival after centuries of no production, harvests about 5kg a year and all the European countries put together only contribute 3% of the annual crop.

Saffron flowers in a traditional basket with recurved
sides so that the feather light produce does not fly out. 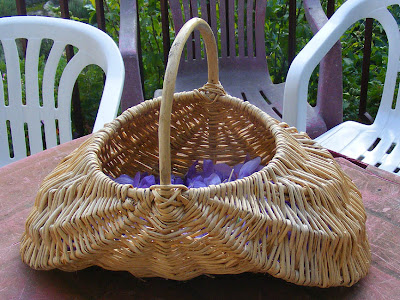 3. There are about 80 other crocus species, many of which are economically important, particularly as desirable garden plants.

4. Saffron consumption is increasing faster than production, and users do not always understand the differences between saffron of different sources. At the moment the ISO (International Standard) only measures the strength of colour, but ignores aroma and flavour. This is currently under review. 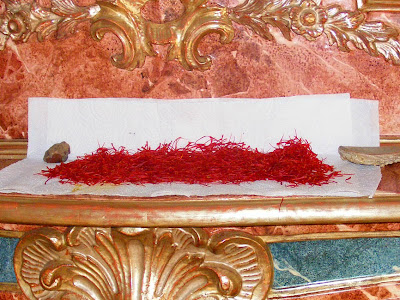 5. Because saffron is disappearing as a crop its gene pool is getting smaller and smaller. Methods of increasing genetic variability and developing new propogation techiques will be a very large part of the project.

I am happy to say that Preuilly is doing its bit to ensure that saffron does not die out in France. Every year in February there is a Saffron Fair here, and on the first Saturday in July the bulbs can be purchased from the main producer, Paul Meriguet in Preuilly's market place.

What an interesting post. So much information that I did not know. Wish you were just a bit closer I would like some of those bulbs. Also I imagine they are quite expensive. Diane

Diane: They are not very expensive. I seem to remember they work out at about 50c each.