It's been a really bad year for orchids. They've been subjected to some extreme seasons the last couple of years and this summer it's really showing in the lack of orchids making it to the flowering stage. The winter of 2008-09 was unusually cold, with temperatures dropping to -17°C for one or two nights in January. Many orchids would have been in leaf then and knocked back by the frost, but the cold weather didn't hang around too long and they recovered. Then they had to contend with a very unusually dry late summer and early autumn, when literally no rain fell for 3 months. The orchids would have been dormant by this time, but they felt the effect of the soil drying and cracking around their tubers. After the rain in September many species sent up rosettes of leaves in the normal way, only to be subjected to an unusually long and quite cold winter. 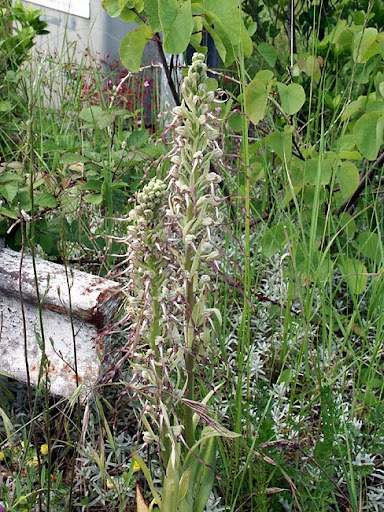 A lot of the orchids in our orchard sent up leaves at this time, but by April, when they should have been sending up flower spikes, about half of them gave up. Their leaves went brown and they retreated into the earth. It remains to be seen whether they have died or just gone dormant because they didn't have the resources to put into flowering after the adverse weather.

We've seen in Europe over the last few years how worryingly low butterfly numbers can get after just a few bad summers. Poor weather for several years in a row on top of habitat loss and pollution can push some species to the brink. Lizard Orchid Himantoglossum hircinum (or Orchis Bouc in French) is extinct in most parts of Britain, the victim of habitat loss and modern farming methods. Here in the Touraine it is the second most commonly occuring species of wild orchid. It is so common on the grassy banks of the Claise Valley that people mow over it without a second thought. But don't think it couldn't disappear within the space of a decade or so, and this year there are noticeably fewer Lizard Orchids. It is not the only species to be affected. Greater Butterfly Orchids Platanthera chlorantha (Platanthère verte), the most common species in the Touraine, and Monkey Orchids Orchis simia (Orchis singe), also normally very common in the Claise Valley, have appeared in greatly reduced numbers. Monkey Orchids are frost tender, and the Greater Butterfly Orchid in our orchard was frosted just as it was about to flower.

A close up of the rather ethereal Lizard Orchid flower. 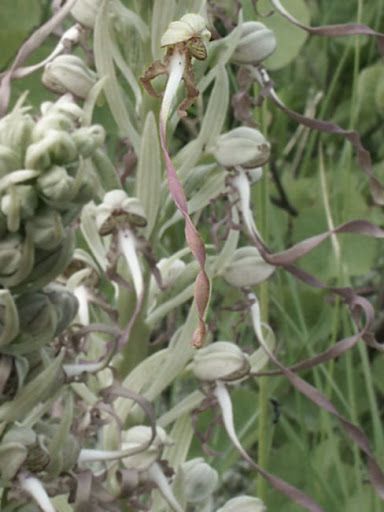 Other orchids, such as the Red Helleborine Cephalanthera rubra (Céphalanthère rouge) and the Narrow-leaved Helleborine C. longifolia (Céphalanthère à longues feuilles) are the victims of people who pick them, and there is evidence that this is on the increase, even though both these species are completely protected by law, so it is illegal to cut them or disturb them in any way (except in the pursuit of normal agricultural practices).

In the last 100 years 4 species of orchid are known to have disappeared from the Touraine. Of these, two were always rare and on the fringes of their natural distribution anyway. The other two, Bog Orchid Hammarbya paludosa (Malaxis des marais) and Summer Lady's Tresses Spiranthes aestivalis (Spiranthe d'été) were abundant and clearly the victims of the acceleration in land draining of modern times, both as a means of preventing disease (malaria) and to make it suitable for more profitable broadacre cropping.

How sad. We take our flora and fauna for granted, often until it is too late.

Jean: There is hope, sometimes unexpected. Lizard Orchids are doing rather well on golf courses in the south of England for instance. The main problem is that orchids are notoriously variable from year to year, so it is difficult to tell a trend from a fluctuation in time to do anything about it because they take so long to mature from seed.

They are all fascinating. The
red helleborine is a beaut. Your orchard is becoming an orchid
preserve..too bad you can't
get permission to collect the
ones you are missing...although
I guess they have varying habitat
requirements. You mention tubers
today and on other occasions
seeds. Do their methods of
propagation vary? I always think
of tubers as spreading.