Back in 2007 we had the graineterie re-roofed, something we wrote about quite extensively at the time. While that work was proceeding M.Galland commented that the roof of the house was almost dead, and that we really should replace it. We considered doing just that, but at that stage we hadn't sold my house, so we didn't have the money. Now the time has come to make a decision - do we call the roofers out after every storm to repair the inevitable holes that appear, or replace the roof. The roof is totally "morte" - the crochets (slate hooks) have lost their springiness, and the slates themselves have started to de-laminate.

On Friday the roofers arrived to put up their staging, which is cantilevered off the wall of the house. It is from here that they will remove the old slates, sort out any wooden parts that need replacing, then hang the new slates. 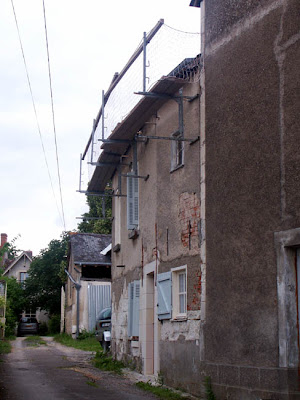 The staging is anchored by wire ropes, tied around the roofing beams. This I was not too sure about, as the whole of this part of the house is a bit haphazrd, construction wise - but they seemed happy enough with it and left on Friday evening in a chirpy sort of mood. 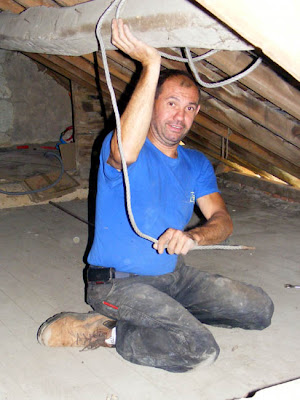 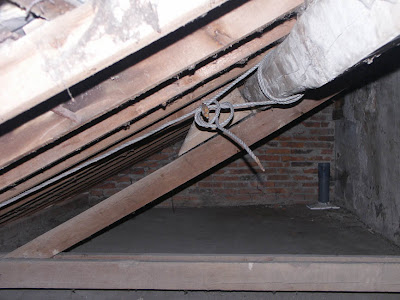 While I was up in the roofspace yesterday I also took a photo of the back of our stair tower. This still has the slates hung on it from when it was an outside wall. Except for those intrepid souls who have been in our roof, these have not been seen by anyone for over a hundred years. 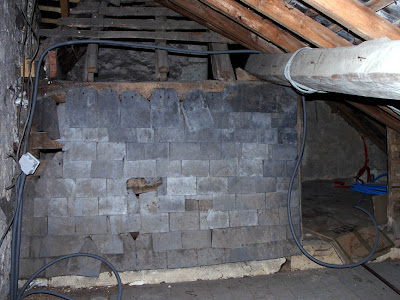 Keep my fingers crossed for your father.

Good luck with the roof.

Yes, good news about your father. Wish him well for all your blog friends.

And good luck with the roof. I didn't realize that the whole roof hadn't already been done.

Glad to hear your father is doing well.

The beams are remarkable - they look rough hewn. I wonder how old they are?

I went back looking at your older posts about the roof and tower. I didn't realized you have been blogging for so long.
How long do you think you still have before you are finished with all the renovations? You seem to have a lot of patience.
Glad to know your dad made it OK through surgery. Happy father's day!

Interesting staging structure - what part does the other end of the rope connect to? Do the tops of the 'cantilevers' attach to the rafters or hang off the tops of the walls?

Nadege: Finished? I will look up that word in a dictionary....


Andres: I took some photos yesterday that I will post (maybe tomorrow) when I have worked out how it all hangs together.

I am late catching up but I will be praying your fathers way.

We'll he's talking alot more then he use to, but he's only allowed ice cubes to ea, and i can't make him laugh otherwise he'll get a sore stomach, but he's doing well!

Kippa - thats good to hear, but grandad not being allowed to laugh? that's a bit harsh! :)

Re-roofing is really hard, especially when your roof has been badly damaged. But I can see that it's getting better now and I can't wait to see your new roof!