When the masons were here (it was two months ago - where has the time gone?) one of the little tasks we had them do was replace the step from the salle à manger (now our salon) to what will one day be the new cuisine. This had previously been done in the same quite nice vitreous tiles that covered the floor of the old kitchen. They were really well laid, and we considered keeping them, but in the end we decided we would lay tomettes directly on top of the existing tiles (most of this has yet to be done). This decision meant we had a problem where the kitchen and sitting room met, as we definitely wanted to keep the decorative cement tiles in the sitting room. Installing a stone threshold / step has solved the problem very neatly. 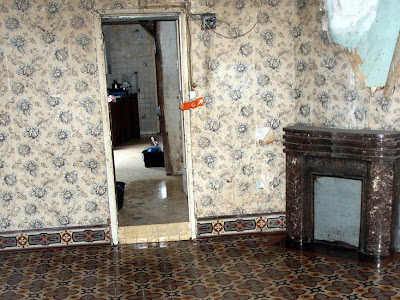 The new step is carved from pierre dure and we are pleased with it for a number of reasons: like the new threshold to our back door, it was made from stone that had come from of the outhouse we had demolished last year, and it is quietly restrained and elegant (if a simple block of stone can be said to be elegant, this is it). 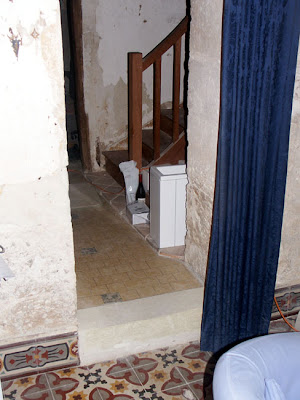 Pierre dure (literally "hard stone") in our area is a calciferous stone (limestone), but a limestone that has started on the path to becoming marble. It is impervious to water, which is why on many limestone houses the first couple of courses of stone look slightly different to the rest - if it can be afforded the bottom of a wall is made from pierre dure. It is also very heavy, which is why it isn't used much past the first couple of courses - it weighs about three times as much as tuffeau. It is also difficult to work and usually has a chiselled finish, as opposed to the fine smooth finish found on a lot of tuffeau. (A note here - if a tuffeau wall is deeply chiselled it is because the wall was intended to be rendered, the chiselling giving the render somewhere to grip).

The new step is higher than the old tiles, as we will be laying tomettes (actually "Carrelage en terre cuite" because tomettes are hexagonal and our tiling will be square) over the old tiles once the kitchen is insulated. We like our new step. It is so in keeping with the rest of the house that we have already started not to notice it.

I hope you're leaving that magnificent Art Deco fireplace!

Tim: It's already gone, and I can assure you, it wasn't magnificent in real life.