Two Oops', One Hurrah, and another Oops (or two)

One thing that has made life really bearable during the last twelve months has been the dishwasher. Because we have not had running water (and more pertinently no hot running water) the dishwasher has been essential. The first time we stayed in the house in winter we brought the dishwasher with us because standing in an unheated house washing dishes by hand in lukewarm water held no appeal. Until last Saturday we have had no problems with the dishwasher. We had one call out under warrantee while we were still in London, but it has been trouble free for almost 5 years.

Last Friday I noticed a pool of water on the laundry floor. This didn't worry me over much, as we have been moving the dishwasher out of the laundry every morning, working on the insulation in the laundry during the day, and putting the dishwasher back at night. Dishwashers never empty completely and a little water always gets spilt when you carry them from room to room.

The Catalpa tree on the verger/potager. The
bumblebees loved this tree while it was blossoming,
but now the tree is in leaf and the flowers finished 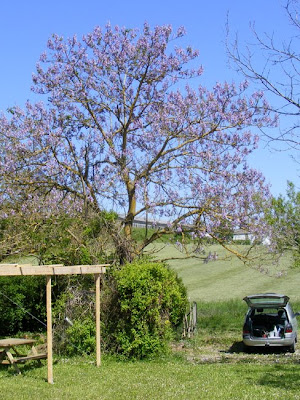 Fixing the dishwasher was frustrating, but ultimately a simple task: over the years the internal pipes had got dirty and various pipes were blocked. In addition, all dishwashers have a float valve, which acts to turn off the flow when there is enough water in the machine, and also to turn on the pump . This had gritted up and was staying open, so water was being let into the machine and pumped out at the same time. A couple of hours of exploring and opening things up and that problem was fixed.

The next day when we turned the washing machine on, nothing happened. "Water in the guts", I thought, so I left it for a couple of hours. When I turned it back on still nothing: some of the lights came on, but none of the controls (and there are a lot of controls) worked. This is peeving, because it is a very good (and quite expensive) washing machine that we bought in London after our previous machine died a year early. (I should explain that - our previous machine was on its last legs, but we hoped that it would last until we moved here and then we would buy a new machine in France.)

Ever since then I have been plugging the washing machine in, then turning it on, only to get nothing. I took the back plate off and considered taking the front plate off (but that's complicated) just so that it would dry out faster - I was convinced that it was just wet circuits and nothing major. Just in case, though, I went to the insurance offie to make sure we were covered (we are - inondations are claimable). In the meantime, all the towels we had used to clear up the flood were starting to smell a bit.

Then, yesterday lunchtime, I plugged the washing machine in, turned it on... And it was just like it had never been away. Result! I quickly put all the towels into the machine, pressed the button - and away it went. I was so excited that I didn't even bother unclipping the drainage hose from the back of the machine and putting it in the drain.

I bet you thought you had escaped without
getting a photo of the washing machine.
Here is is, all ready to go. 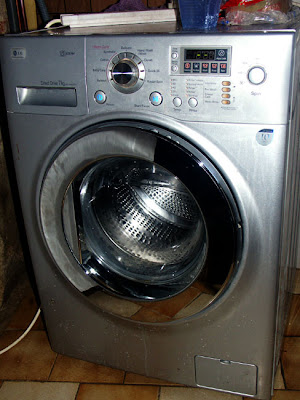 Oops! Still - at least this time I have clean towels to dry the resulting flood. Then I can wash them again....

...or use them when the new shower cubicle overflows...OH NO!!

That Catalpa looks very much like a Paulownia to me. I've never seen a purple Catalpa. I don't even think they're the same family either. Susan will tell us.

CHM: We were told by the previous owner that it was not a Paulownia, it was something else similar. I've been calling it a Catalpa on those grounds, but having now finally bothered to look it up, I think it must be a Paulownia.

We've been having that Paulownia/Catalpa discussion around here too and agree with chm.

Isn't that always the way with machinery. Sometimes I swear the only reason why they don't work is to get someone to just show a bit of interest by opening up a cover and looking inside - not actually to do anything, but just to give them a sign of attention.