The scene: two Englishmen sitting in a garden in the South Touraine, each nursing a glass of red wine. It is midsummer and they are enjoying the first time this year they have been able to sit outside comfortably. For the purpose of this exercise we will call them Alex and Simon.

Don't get me started on light switches

But which way is on?

In this household, the English way.

But which way is that? It's been so long since I have had a light switch I can't remember which way up they should go.

With a push switch you push the bottom for on and the
top for off. The French do it the other way.

We had a heated discussion with Stéphane the other day when we put our first switch in because I was sure he was doing it the wrong way and he was adamant he was right.

Our first light switch, installed last week.
To a Frenchman, this light would be on 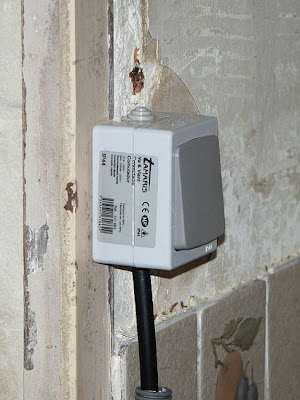 Sometimes it's the little things that catch you out. I didn't realise that in France light switches are turned through 180° so that you push the top of the switch to turn them on: maybe it's because so many are va-et-vient (two way) switches, so they are higgledy-piggledy all the time anyway, maybe it's because (as I said) it's been so long since I used a light switch - about six months - that the reflex action of turning a light on has been lost. Some things are so ingrained that it just doesn't occur to you that it's possible for anyone to do them differently.

Now we have a little dilemma - do we conform to the French norm, or do we maintain our Anglo (and Australian) independence?

In the US, light switches are normally toggles. Up for on, down for off. They even say "on" and "off" on them. Of course, you get get all fancy and have designer switches, but they're still up for on and down for off.

I think that loosely corresponds to the french way.

And the double "get" above should read "can get."

Which way you install the switches depends on whether you ever intend to sell the house, and who you figure you might sell it to. If you think French people might buy it, do it their way. Besides, when in Rome...

In my case, who cares. I can tell immediately if the light is on or off, whichever way the switch works! It's just a knack I've got.

How to design the bathroom is another cultural question. Don't put the toilet in with the shower/tub and sink if you want French people to find it "standard" and normal.

I know at least one French house that has toilet and bidet in the same room as the bath and shower, but when this is the case, I imagine there is always another toilet in its own cabinet. That's what we've chosen to do, with a toilet in the ensuite, but a separate toilet downstairs. I am not a huge fan of toilets in bathrooms and remember being utterly bemused when a Scottish friend bought a house with a separate toilet and bathroom and decided to knock the two rooms through!

With regard to light switches, I imagine that in a few years no one will know or care because so many are rocker switches and the lights can be turned on or off from two different switches.

The switch for our ballon (or is it balon)is in the bathroom,(along with the control panel for all the electrics).
In at the top means on as it is labelled by hand "marche" but has a red marker. In at the bottom is labelled "arret" and has a green marker.

Never mind what way you install them, the question is what have you been doing up until now if you haven't used one?

Ken: you can see through walls? :¬) We have nowhere in the laundry to put a light switch, so it's on the kitchen wall.

My main point is that this is one of those things where it never occurs to you that the whole world isn't the same, especially as Australia and the UK are the same and that's where we're coming from.

We've been camping in the house since may last year - no light switches (or even lights), just standard lamps plugged into temporary powerpoints

Simon, you need a special switch with a voyant — a little light built into it that indicates whether the light on the other side of the wall is on or off — for such situations. We have one of those for our downstairs pantry, and another for the outside light over our back door. Both those switches are in the utility room, and you quickly see if you've left a light on in the pantry or outdoors when you look in there.

Susan, I keep thinking we should have the bidet in our bathroom taken out and have a toilet put in its place. Leaving the toilet in the WC room to. But Walt wants to keep that bidet.

Ours change from room to room!! In fact the two next to each other in our bedroom are opposite to each other. Very confusing at times:) If I knew how to rewire them I would but my electrical skills are nil, LOL Diane

In new construction here in the States (California and Arizona) I see these same switches with up being the "on" position.

I have a place in Charnizay, not ten kilometres from you.

Itwas fully re-wired by Mon Maubois from Martizay not long ago and all switches switch in at the bottom as in English switches.

Also I have solenoid switch for thew top of the stairs and a socket light switch that powers up a socket when the light is on. These have all been designed to be mounted the English way.

I beleive you have an incorrectly mounted switch if it has been set up the Americam way.

I will be in France in two weeks so I can post a picture of my switches if you'd like.