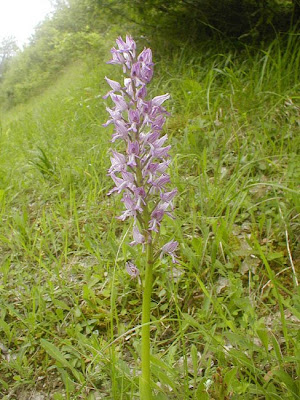 This single magnificent specimen of a Military Orchid (Orchis militaire in French) in its prime was flowering on a roadside bank near Chaumussay and photographed by me 4 days ago (using my little camera, so the image doesn't do the plant justice). Around it were some others which had finished and were setting seed, as well as Fragrant Orchids just starting to flower, Twayblades still in their prime although they've been flowering for a month now, and some past their best Monkey Orchids. The Monkeys have been badly knocked by the cold winter and late frosts this year. Normally the roadsides in the Touraine river valleys south of the Loire are covered in this pretty pink orchid in May, but this year they were hardly to be seen.

This is the only site I know of near us that has Military Orchids. As in other départements in the west of France, Orchis militaris is rare in Indre-et-Loire. Occuring in a few localised spots in the Touraine du Sud, the species hybridises easily with its close relatives the Lady Orchid and the Monkey Orchid, which are often present in the same locations. The hybrids are often fertile, and themselves hybridise with the parent species, causing a complex movement of the genetic pool known as introgression. Many Monkey x Military hybrids are very difficult to identify, and indeed, looking at it, it is possible that this specimen above has some Monkey lineage.

Military Orchids grow in calcareous grasslands, scrub, woodland edges and open woodland, in full sun or part shade, flowering from mid-May to mid-June. They are protected.

Susan, your Loire Valley Nature
site is terrific. Can't imagine
where you find the time. How's
the orchid trove in the orchard
doing? More pics?
Re yesterday's blog -- the tile
work and the fire mantle in the
salon are wonderful. And all in such excellent condition. Amazing
that someone thought "this blue
flowered wallpaper is just the
thing to go with the floors."

Sheila: I'm glad you like LVN. The Pyramidal and the Bees are looking fantastic at the moment in the orchard, and the Spiders have set seed.

The fireplace in yesterday's post had actually split, and was concrete painted to look like marble. In real life it was not very nice, and has been replaced with a lovely simple recovered stone chimney piece.

That anyone would choose the wallpapers one finds in old houses is always completely baffling :-)