The weather here has only now warmed up enough for vegetable seedlings sown in the early spring to start to really put on some growth. All our tomatoes and aubergines are tiny plants, some with barely more than their dicotyledons (their first pair of leaves straight out of the seed).

A cherry tomato with our first tomatoes for the year (below). This was grown from seed I saved from last year. This plant has been in the garden about a month, much longer than all the other tomatoes. 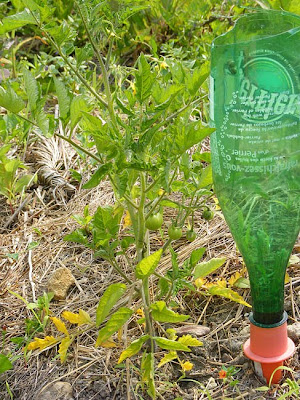 I've now planted out all our vegetable seedlings, no matter how tiny they are. Some of them were so desperate they were flowering, even though they only had two or three mature leaves and were yellow and sickly from the cold and being stuck in a plastic cell (aka a reused individual yoghurt pot).

This zucchini has been in a week. Before it was planted out it looked like the cucumbers below. 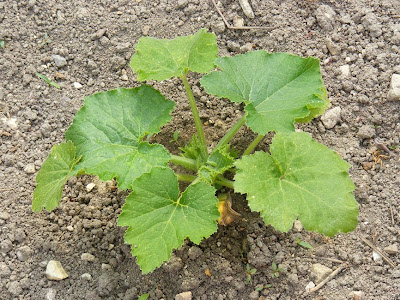 The broad beans and mangetout which were planted direct back in April are producing top quality peas and beans, with enough surplus to freeze. The regular peas are giving me quite a good crop too. The lettuce has been delicious and crispy in the cool weather but is now starting to get a bit sunburnt. I've left in all the chard that's gone to seed as it is giving the little lettuces a bit of shade.

Tiny Lebanese cucumber plants which started flowering in the coldframe before they were big enough to have full sized leaves (below). They were planted out 3 days ago and already look better for it. 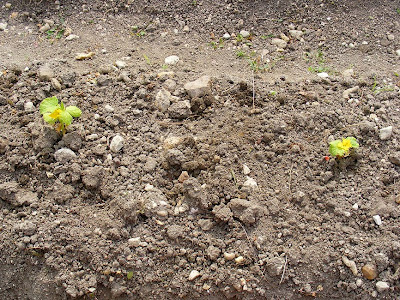 I've been told that this year the season started so badly that even some professional gardeners lost all of their first plantings - seedlings simply disappeared after being put in the cold damp soil. The earth has taken ages to warm up and because it has quite a high clay content, plants haven't been able to thrive. Hopefully now it will all change. Now all I have to do is keep the water up to things and wait.

Susan you seem to be well behind me in your garden. I have already picked 5 of the round courgettes and the others are close behind and developing well. I planted chard earlier this year, so I hope as usual it will go through to next season before going to seed. The haricot I see are flowering, so soon I hope I will be picking. The cucumbers plants have flowers on the them and the pumpkins are the size of golf balls. Diane

Diane: the zucchini are flowering, but no sign of fruit yet here. The chard that has gone to seed is last year's. I've already harvested some of this year's chard, but I didn't get a good germination rate, so I don't have very much. I lost my first planting of beans, and the next lot are not flowering yet. Cucumbers are flowering but ridiculously small plants and I've only just sown pumpkins, even though it might be too late to produce fruit. I'll be harvesting onions, garlic, carrots and potatoes in the next couple of weeks, and peas, mangetout, broadbeans and lettuce at the moment.

We forget how important the weather is and that it means "feast or famine" in third world countries. Susan, look at this beautiful picture of a Baltic marsh orchid. Remo Savisaar is sooooo talented.
http://blog.moment.ee/

We have lots of little yellow courgettes which will no doubt be ready to be picked..........while we are away in France! C'est la vie!