chm commented yesterday that he wasn't sure what we had meant about the "staircase tower". I did some research: looking at odd stone walls lying around in other people's gardens, and snooping about in our roof space/attic to come up with the following diagram. 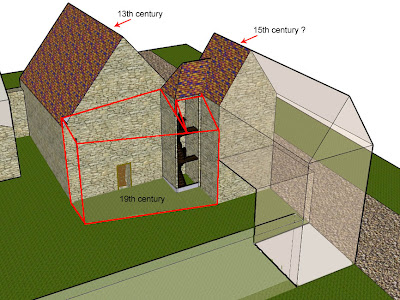 Of course, the dates are rough - they go on what we have been told about building styles and construction styles, particularly in the roof. Whereas the granary seems to be more or less of one date, the carpentry in the roof is stylistically the oldest part of the house, whilst the facade has been renewed at least once - probably in the 17th century (maybe...).

The shaded part of the house is a supposition based on a wall in our neighbours garden. It runs parallel to our house, and is of the same stone and style, whereas her house is modern, probably 1970's, construction. Certainly the gatehouse type construction I have assumed is common enough in this area. We do know the house extended further down the hill: we have half a St Andrew's Cross against a newish brick wall in the attic, and St Andrews Crosses were never done by halves. 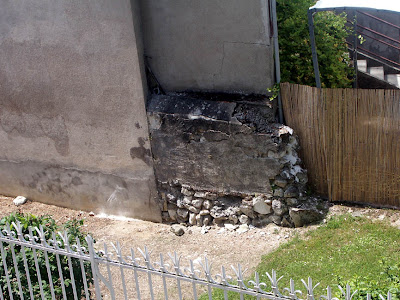 Whether any of this is correct is anyone's guess: the people who could tell us more have been dead for hundreds of years.

Email ThisBlogThis!Share to TwitterShare to FacebookShare to Pinterest
Labels: Our house in Preuilly, Roofing

Hi, Simon,
Thank you for this diagram. It shows exactly the set up and the different parts [and dates] of your house. It's interesting to guess that part of the house which obviously was torn down, for whatever reason, over the years.

I knew where the staircase was, even though I didn't go up then, not being that adventurous at the time! LOL I didn't know how it looked like in its prime time.

P.S. You are a many talented person.