L'Eperon Barré de Murat ('the barricaded spur of Murat') lies just outside the village of Ferrière-Larçon, about 20 minutes drive from Preuilly. It's owned and managed by the Conservatoire du Patrimoine Naturel de la Région Centre, and yesterday I went on a walk there guided by Manuella Vérité, the Conservatoire's animateur for Indre-et-Loire, our département. I was very keen to see this site, as it has the reputation of being the best orchid site in the département, and I was curious to see how it compared to my own favourite site, also on a ridge, on the outskirts of Boussay. I'd taken private clients there the day before and seen 7 species (later in the season it's possible to see 10 species here). Could the Eperon de Murat beat that? Well, yes it can – with 1 extra species and a clear example of a hybrid (and 14 species possible).

The group with Manuella pointing at an orchid. 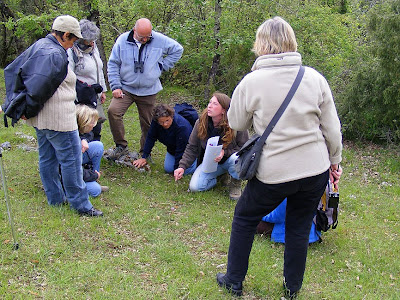 The Conservatoire manages the grassland by slashing part and having sheep graze the other part. The slopes have many juniper bushes, a sure sign that sheep have grazed here for many years (the juniper flourishes because the sheep won't eat it) and are essential to maintain the stability of the ecosystem. 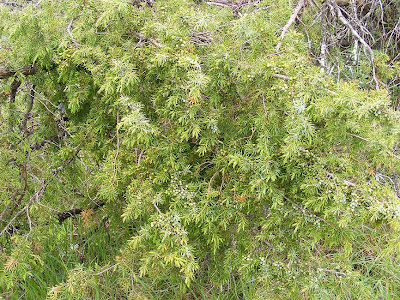 The site is remarkable from a number of points of view. It's a plateau between the Brignon and the Larçon rivers, at the point where they join. The slopes face north and south. The tip is formed by yellow tuffeau (a grainy, sandy limestone with pellets of clay), separated by iron rich hard ground. The tuffeau has been quarried, and huge man-made caves now tunnel under the plateau. In Prehistoric times, the Eperon was ideal as a defensive camp, and two walls were built to close off the tip from north to south (hence it is barré).

Part of the prehistoric wall. 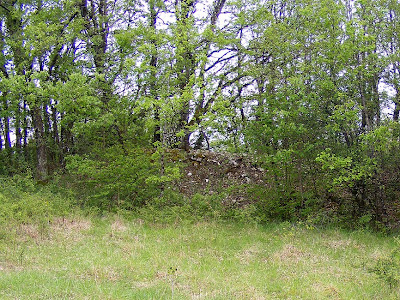 The soil is calcareous, shallow and poor, and the vegetation consists of species characteristic of pelouse calcicole, including juniper, chalk milkwort, and Fly Orchid. The soil is too poor for it to have been ploughed for growing cereals. Burnt Orchid and Narrow-leaved Helleborine also thrive. Right in the middle of the plateau is an enormous and very old Woolly Oak. 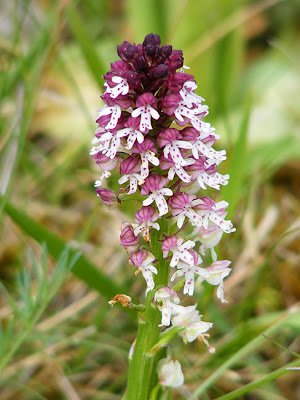 On our walk we saw Lady Orchid, Common Twayblade, Monkey Orchid, Fly Orchid, Greater Butterfly Orchid, Narrow-leaved Helleborine, Burnt Orchid, Early Spider Orchid, as well as a hybrid Monkey x Lady. The Fly Orchids are Manuella's favourite. She likened them to poupées gonflés (blow-up dolls), because they are pollinated by male bees, which fool themselves that the pheromone emitting flowers are female bees. 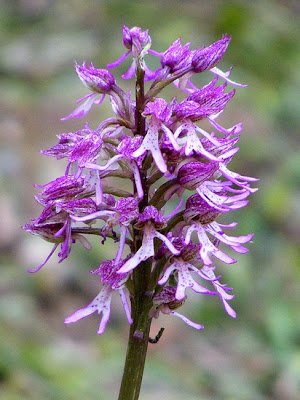 What is a Woolly Oak? An old one, with moss on it? Or a species, perhaps. Beautiful orchid pictures.

Emm: Sorry, it's not Woolly Oak at all. It's Downy Oak in English, chêne pubescent in French, Quercus pubescens. It's a species of these limestone ridges, usually a small tree. It is very unusual to see one that is as big as a respectably sized Pendunculate Oak Quercus robur.