I wrote about European Orchard Bees Osmia cornuta in early April. Orchard Bees are a type of mason bee and they nest in holes in wood or masonry. All April the females have been inspecting our house for nesting potential. They don't make the holes themselves, rather they use existing holes if they are unoccupied and of a suitable depth and diameter.

A European Orchard Bee nest hole (lower middle) in our graineterie wall.
One afternoon it looked like this, with a pollen layer visible... 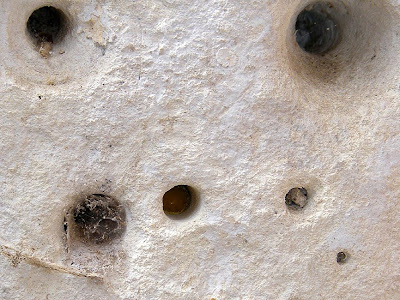 Once a hole has been identified as having potential, the female bee puts down a layer of mud at the back of the hole. Then she collects pollen and puts down a layer of that. She lays an egg in the pollen layer and seals it in with mud. Then she repeats the pollen, egg, mud layers until the hole is full. Of course, the first bee to hatch is the one at the back, who is obliged to gnaw its way through all the layers to get to the outside world. On its way it nips its siblings to stimulate them to hatch too. 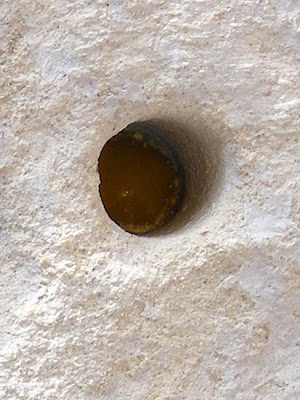 ...by the next afternoon it looked like this, sealed up with mud. 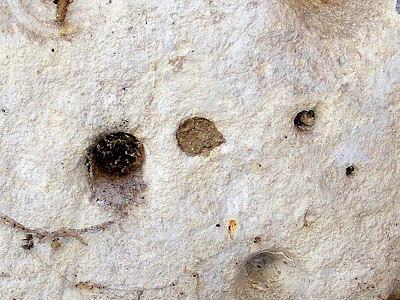 A European Mason Bee about to enter her nest hole,
this time in a wooden lintel on the side of our house. 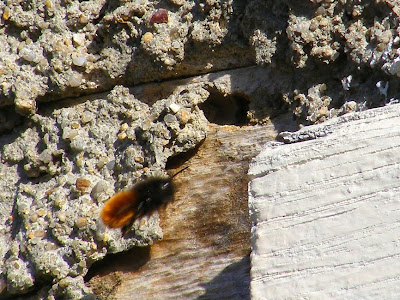 L'autre Mason Bee - a Red Mason Bee O. rufa (below), which I found on our new front window ledge. I wondered if all the stone dust had attracted her. You can see the powerful mandibles (jaws) which show their close relationship to Leaf Cutter Bees, and check out those powerful grappling hooks on her feet! 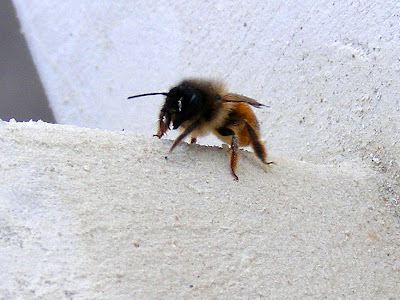 Red Mason Bees are actually less red than European Orchard Bees, and emerge slightly later. Although native to Europe, they are also available commercially for people who want to improve the pollination of their fruit trees, and are therefore a much more widely known species.

Note the 'horn' projecting from the front of the head,
a feature of mason bees. 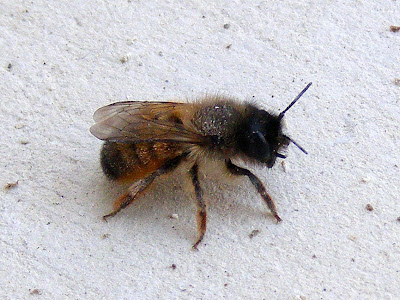 That is absolutely fascinating. I had no idea that there were Mason bees although I do know that some bees are solitary. I was only saying to Captain Sensible yesterday that we have a lot of Bumble bees around the house and they do look red bottomed. Our garden is full of the humming of bees around the cherry tree, plum and apple blossom. I shall now start searching our stone house for holes.

Very interesting, Susan. I will check out our holes when we are next chez nous. There are plenty of them !

some hatch early spring, i got some board this spring,


they did not hatch until, june, which did not work for fruit trees,i am in the market for some that hatch in april, ok