Will there be an Invasion this Year? 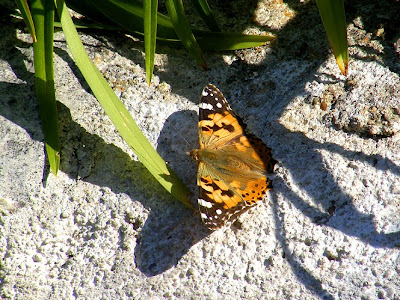 Last summer will be remembered by European lepidopterists as the Year of the Painted Lady Vanessa cardui (or if they are French, I suppose it will be l'Année de la Belle-Dame). As many as a billion of these flitting black and tan butterflies made their way, in several generations, from their winter breeding grounds in the Atlas Mountains in Morocco, up through Spain and France, some stopping to breed again in southern France and send their progeny on into the Netherlands, the British Isles and up to Finland.

Battered and tattered, this one may have come
all the way from Morocco to Preuilly. 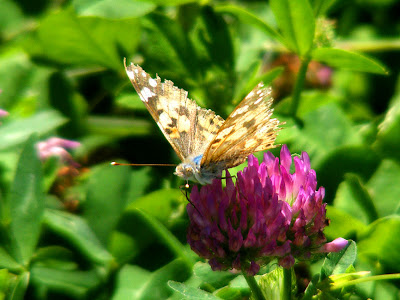 Here in the Touraine, this species cannot survive the winter and we rely on the annual migration to re-colonise the flowery grasslands. The Painted Lady is constantly on the move, migrating in order to be able to breed all year round, from North Africa in the winter, to northern Europe in the summer. The caterpillars eat an unsually wide variety of plants (at least 30, from 7 different families, including thistles, asters, mallow, echium, borage and plantain) and the adults follow the seasons and food supply for the caterpillars. The migration takes place over many weeks, but in late April 2009, 130 individuals per minute were recorded crossing a garden in southern France, all heading north-east. 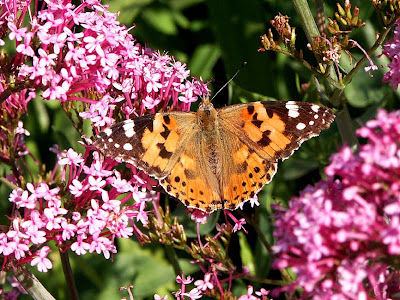 These butterflies only have a wingspan of about 7cm, but some of them made trips of at least 1500 km. The long distance travellers, as opposed to the ones born locally, can be identified by their pale colour, indicating they developed in a hot climate, and by the time they've travelled that sort of distance, they can be fairly tattered too. 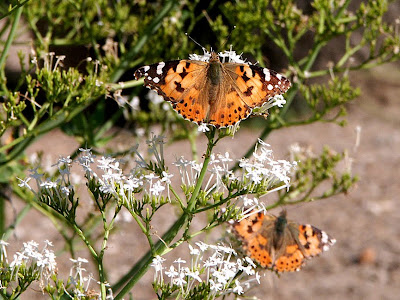 By the time the mass migration crossed into Germany and the Netherlands, in mid-May, there was an advancing front of butterflies about 1000 km wide. According to Butterfly magazine, 'typically, sightings were of butterfies flying fast and low, invariably northwards, in streams (with butterflies a minute or two apart) rather than swarms.' In some places, there were thousands of butterflies passing every hour.

I would love to see a migration of butterflies so will look out for them towards the end of April.