We mentioned the other day that St George is the patron saint of Preuilly sur Claise. This is the first year we have been here for the fair that happens on the first weekend after April 23 - in previous years we have missed it by a matter of days. 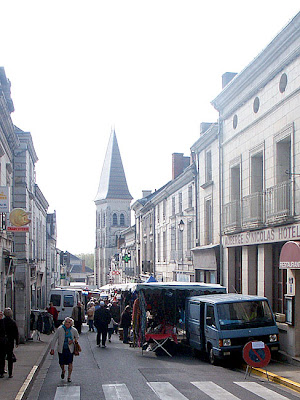 We went out to the marché on Saturday morning as usual, to find that our street had been blocked off, and that instead of the usual 5 or 6 stalls in the Place des Halles there was brocante and other stalls lining the place, as well as the Grande Rue. The stalls went all the way down to the abbaye, and across the bridge. At the abbaye itself was a funfair, with shooting galleries, various rides (none, it must be said, too frightening) and dodgem cars. 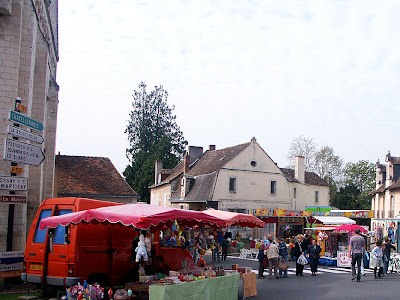 We strolled down to the end of the stalls, looking at the usual collection of stuff, some of which I am sure I have seen on other people's stall at other brocantes, but with one or two very nice items scattered around them. We didn't buy anything though: what with the plumber due to start work we are aware of the money situation, even though we have a perfectly reasonable devis for the work. We wandered back up the Grand Rue towards the mairie, a process that took some time as the whole town was out enjoying the activity and some lovely spring weather, and of course there was plenty of news (and not a little gossip) to catch up on. 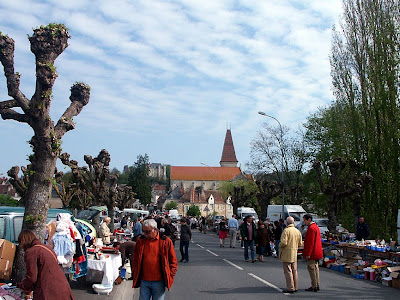 Once at the mairie we stopped for a bite of lunch, sausages and chips, followed by cakes made by the kids at the primary school. While we were sitting there various friends and acquaintances stopped to say hello and had a drink with us, and we enjoyed a convivial lunch. We ended up leaving the fair at about 2.30, as by that time a certain torpor had set in. We didn't go back later in the evening, although we suspect that the area around the abbaye - where the funfair was - continued to be fairly lively until quite late in the evening.

Like with the Bastille Day celebrations, we were quite surprised at how well attended the event was for what is, after all, just a small town in the middle of the French countryside.

We had a wonderful time at your (Preuilly) brocante last year and seeing your pictures has brought it all back, Thank you.

John - Did it not rain last year?