The February 21 apéro soirée was held at the Salle des Fêtes (village hall) in Preuilly sur Claise. I decided to ask to rent the Salle des Fêtes because I needed a space that would be big enough and warm enough. Finding venues is easy in the summer, but winter is much more limited. Luckily, when I went into the mairie (town hall) to ask about the Salle des Fêtes, the mayor and the deputy mayor were both there. They had a brief conflab and then Gérard, the deputy mayor, came out and offered it to me for free. I am obviously running a public service with these gatherings! 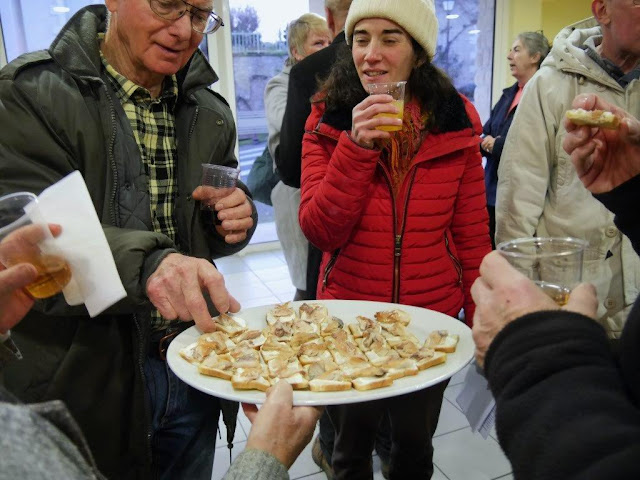 People are very generous with their contributions of food and drink. There were some excellent wines offered (you can tell because French people pick up the bottles and exclaim or indicate they know and approve of the winery). On the other hand, there is always someone (not necessarily the same person each time) who brings a wine that's been in their cellar just a bit too long. It's never undrinkable though -- just a bit past its best. And nobody minds, because otherwise it would be wasted, and this way it's shared along with some really good wines.


Some of the food. Babeth's savoury cake is the loaf third from the left.
I'm told the cheese puffs (first left) were amazing too but they disappeared before I got one. 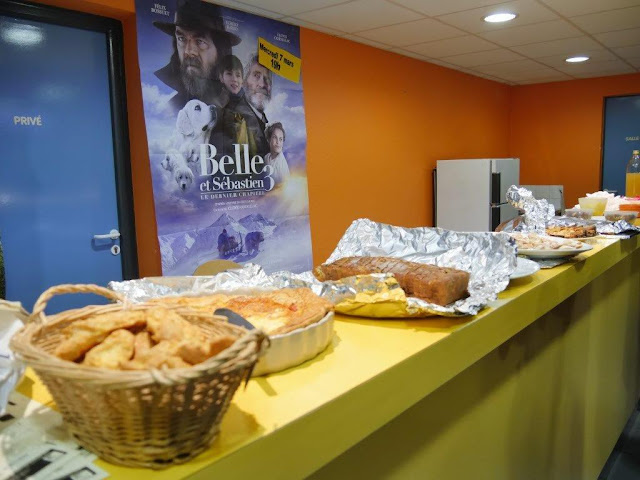 Many people go to the effort of making something homemade. We had cheese puffs and several quiches (Nathalie's trout and leek was especially good). Babeth made a savoury cake that got a lot of praise. Melvin, who was attending for the first time, and on his own, consulted his wife (a professional caterer) about what he should bring. She advised smoked mackerel toasts and gave him detailed instructions on how to prepare them. They were excellent. And Tim's pork scratchings went down a treat with French and English alike. Zita and Clarisse, the small daughters of Dauphine, kept themselves occupied with taking platters of food around the other guests and were a terrific help at keeping things circulating. We had virtually no food left at the end of the night, and had consumed 14 bottles of wine. Clean up was easy because there are no plates or cutlery, and everyone takes their platter home. Plastic glasses and paper napkins were chucked in the bin (if we'd been at home it would have been real glasses, in the dishwasher, and paper napkins composted). 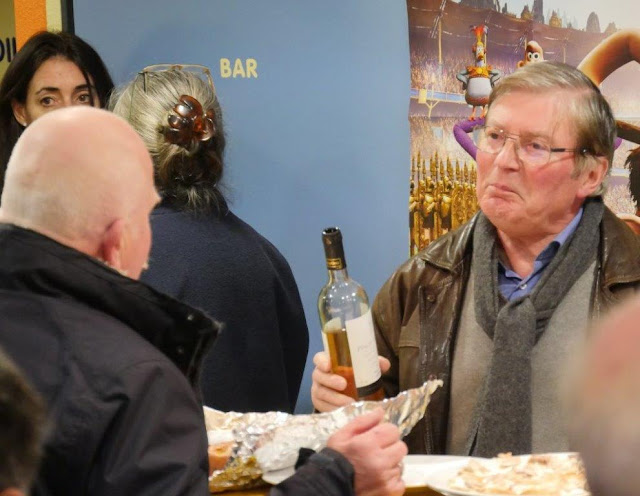 The venue, the entry foyer and bar on the ground floor of the Salle des Fêtes, was ideal for the gathering. There was enough space, plenty of chairs (although most people chose to stand), a fridge, sinks, toilets, heating and a cloakroom. I picked up the keys mid afternoon and Gérard stayed to help clean up at the end, and took the keys and locked up for us. I was amused that he mopped the floor 'because the cleaning lady complains if the place is left dirty'. 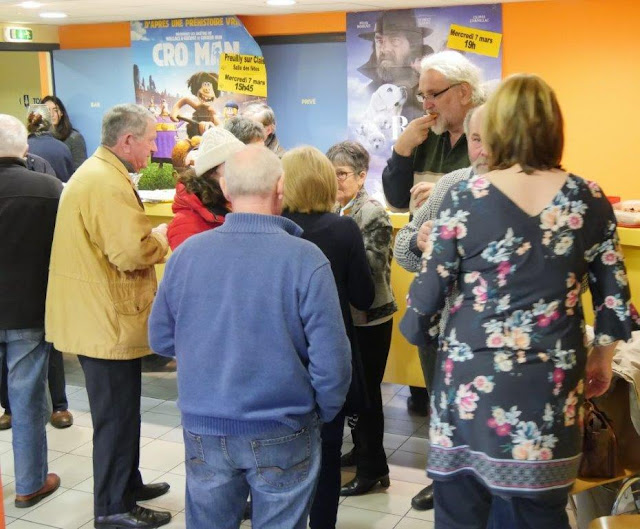 Nobody remembered to count how many people were there, but afterwards Gérard and I estimated there was about 45 people present. There were at least eight people who were attending for the first time. I forgot to take my camera, but luckily André and Louisette had theirs and took lots of photos. The photos in the blog post are Louisette's. André has put his online and they can be seen here.


Me and Gérard dealing with drinks. 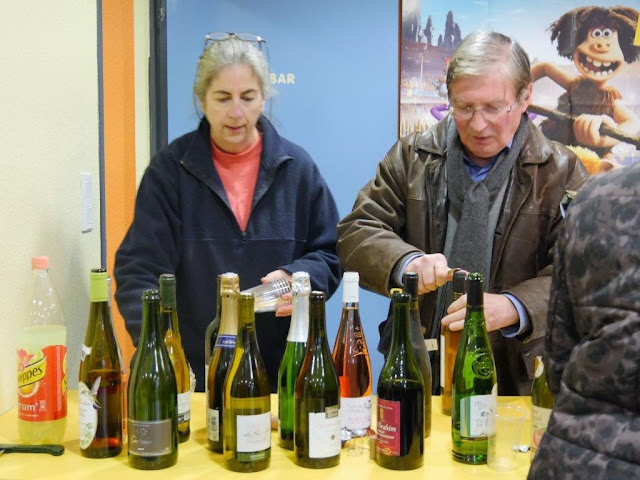 I'm really grateful for all the support I receive from people attending these apéro soirées, and they are working to creat a community social network in just the way I had hoped.

It's a great thimg you are doing, Susan: mixing people up like that. Keep it up!

I always enjoy reading about these gatherings. Today's recap is especially interesting. Sounds as though the cleaning lady has the mairie well organized.

What a wonderful idea! I wonder if it would work in our village. Hmmmm......

Try it and see. We've been going a year now and attendance varies between about a dozen people to about 60 people. I think the trick is to keep it really simple. No cutlery, no plates. Ask everyone to contribute either a bottle of something (not necessarily alcoholic), or a platter of finger food (but not both because then you end up with huge leftovers). Invite literally everyone you have an email address for who lives within a 50km radius. Ask them to invite their friends. After a while it just develops a life of its own. I send out one email a month to the invitation list, saying where and when the next one is, usually with about 3 weeks notice. I share photos and offer general instructions on what to bring, where to park. And that's more or less it. Everyone who comes responds very positively and appreciate that I drive it, but it is extremely informal and you just have to turn up and chat. I vary the day of the week it is held on so that it suits everyone at least a few times a year.