A couple of weeks ago we went to dinner at my friend Nathalie's. Also at the dinner was her friend Chantal and she invited me to an event she was hosting. Chantal told me she had recently retired from working in the theatre as a costume maker. She grew up in Montrichard but had spent much of her career in Paris and La Rochelle. When the time came to retire she searched the Touraine for a house that had a barn suitable for staging workshops and performances. 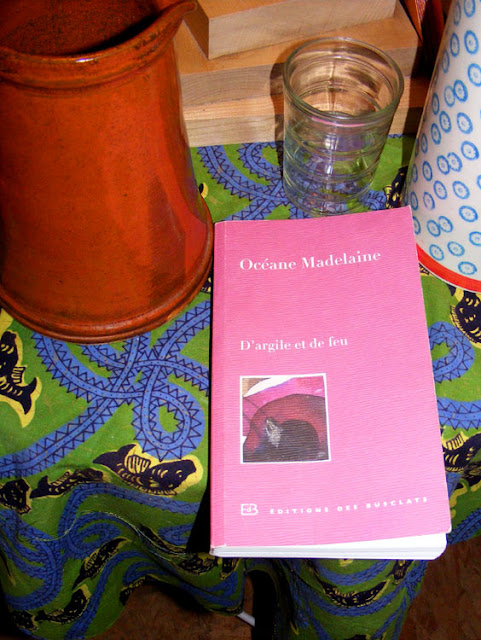 Chantal's event was part of a programme called Mille Lectures d'Hiver (A Thousand Winter Readings). It is designed to offer a convivial gathering to people who are interested in living authors. For each event a host invites 20 or so people to a venue of their choice. It could be their house, a library, a hospital, a village hall or a café. The guests might be friends, family, neighbours or colleagues who want to discover some modern literature. The programme runs from 1 January to 31 March every year and is co-ordinated from the Orléans library service.

The audience mingling after the reading (my friend Bénédicte looking stylish on the right). 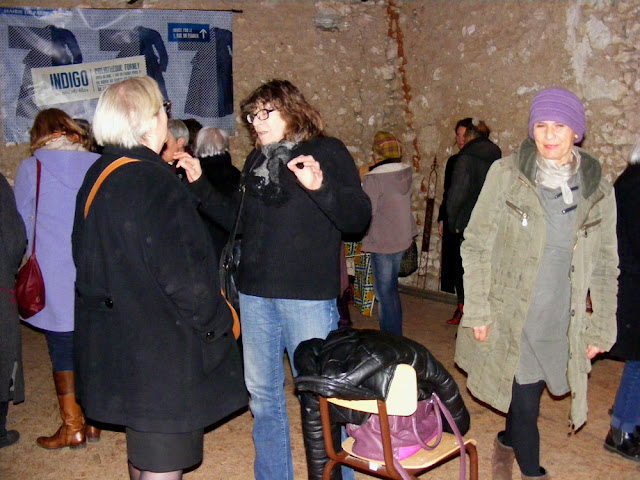 The host doesn't get to choose the text. The programme is all about discovery, and you can't choose what you don't know. Many writers are barely known. They can't compete with the heavily promoted publications of celebrity authors and are marginalised. Allowing the hosts to choose would simply result in many of them choosing already well known authors.

The buffet. Chantal on the left, Marion centre. 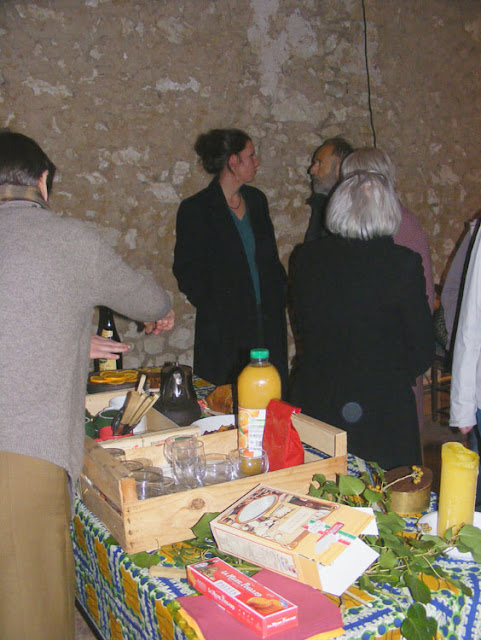 In the case of the reading at Chantal's it was the reader, a professional actress called Marion Minois, who chose the text. She works often with the Mille Lectures programme and chose a book called D'Argile et de Feu by Océane Madelaine. It's a slim volume from a tiny publisher. The book is about two women, one contemporary, one 19th century, who are linked by fire and clay. One grows up in a rural pottery and makes a name for herself as a skilled artisan in a man's world. The other finds her diaries and notebooks containing recipes for glazes when she inherits a cabin in the woods. The author is herself a potter. 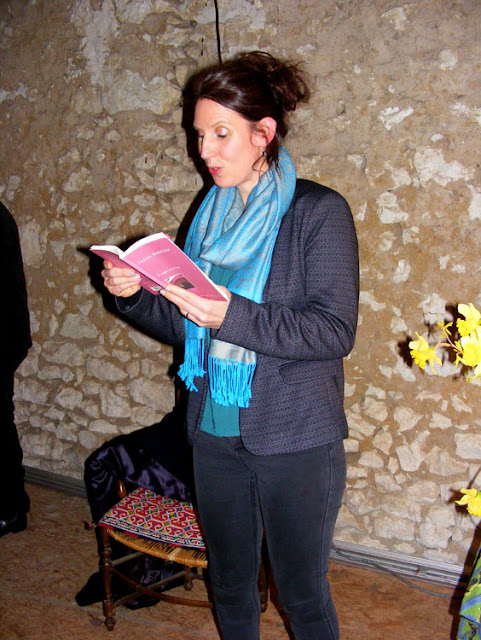 The readings last about an hour and are followed by a question and answer session. The audience are encouraged to freely express their opinions. After all, it's a lottery, and the book might not be to everyone's taste. Luckily, everybody in the audience I was part of responded positively to the book. They were also very curious about the reader. They wanted to know how much she had practiced (3 days intensive work and 3 weeks of reading through it once a day), why she had chosen the book (she had friends who were potters and thought the story evocative), what else she did (works in a company of 40 players in Vendôme, does workshops in schools with two male colleagues). 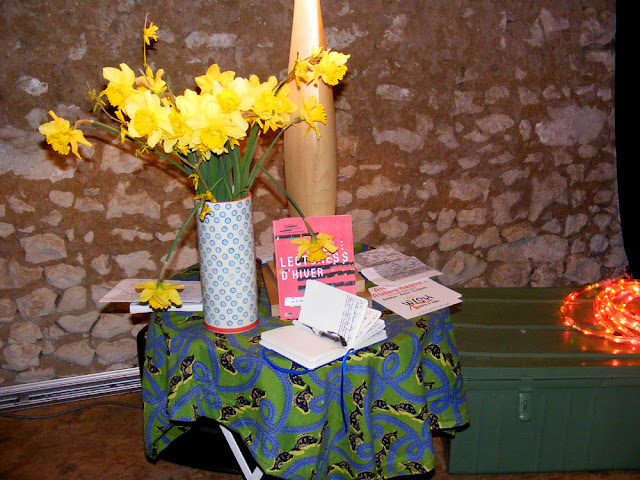 After the reading there are drinks and nibbles or a meal. The audience was asked to contribute and brought wine and cakes (sweet and savoury). I brought root vegetable crisps. The host is expected to feed and accommodate the reader.

The Mille Lectures is funded and administered by Ciclic. They pay the readers, cover their expenses and the royalty payments. They organise the circuits and put the hosts in touch with the readers. Ciclic is part of the library system in our region of Centre Val-de-Loire and they are also responsible for the film archive of  the region.

This event was in Barrou, population 492 and was free to attend. Chatting to one of the audience, she passed on to me that this sort of cultural event started happening in 1970s in the provinces. Before then the Touraine and other rural areas were hopelessly rustic and unsophisticated. But in the 1970s the educated classes started buying rural properties and reclaiming their heritage. They spent all their weekends restoring these old places, and then later retired here. They provided the impetous and connections to organise local theatre, exhibitions and concerts.

Interesting initiative meant to put unknown authors into the limelight.

It's hard to think of the Touraine, home to Rabelais, Ronsard, Balzac, and many other great writers, as "hopelessly rustic and unsophisticated." Sounds like a Parisian attitude to me.

I'm fairly sure she meant within living memory, ie 20C. I'm sorry I didn't make that clear. And I can see what she was getting at. This area was largely populated by the working poor, ignored by the government and the attitudes rustic in the 20C. There may have been pockets of elitist cultural activity, but it wasn't something the average local could be involved in. There was am dram, cinema, the newspaper, and fireside singalongs, but not much that was terribly sophisticated. Almost everyone who was clever and got themselves an education left as soon as they could -- for Paris, hence the 'Parisian attitude'. I suspect my 'informant' grew up here and has retired here but spent most of her working life in Paris.

Yes, I thought it was rather clever. I enjoyed it far more than I expected to!