I grew up in Canberra (Australia), and in the late 1970s earned my drivers licence. This meant that (theoretically, anyway) I was free to take myself off to interesting places, something I started doing in 1980 once I had bought myself a car.


The big attraction from Canberra was the New South Wales South Coast - a stretch of the east coast about 500km long which contained many beaches, caravan parks, pubs and clubs (not many of which existed in Canberra). One venue of note was the Tathra pub, which in those days was about 4 hours drive away. It was a quite rundown traditional pub which had live music at the weekends, cheap beer, and "interesting" patrons.


The pub still looked very much like this photo from the 1960s when I started going there. 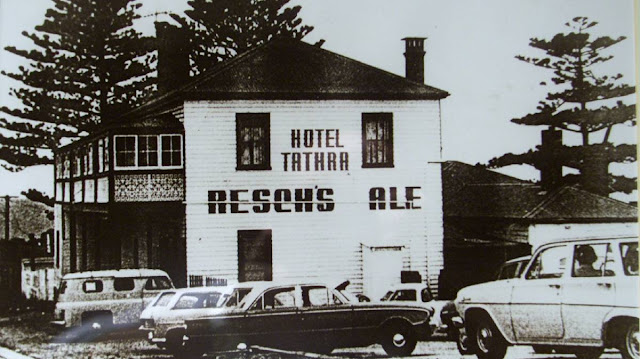 When we in Australia at the end of last year we visited the South Coast and stayed with our friends Rick and Helen, who told us about the amazing renovations, and the great new publican whose first move was to install a good live sound system and get rid of the pokies (slot machines). The pub had only re-opened after renovation about 2 weeks beforehand. They suggested lunch and we didn't need much convincing, so we went and sat on the beautiful verandah with views of the sea on both sides. We had a great meal there while watching a sea eagle cruising along the coast. At other times of the year you can whale watch from the same seats.


We sat at the corner table, in the shade of a Norfolk Island Pine tree. 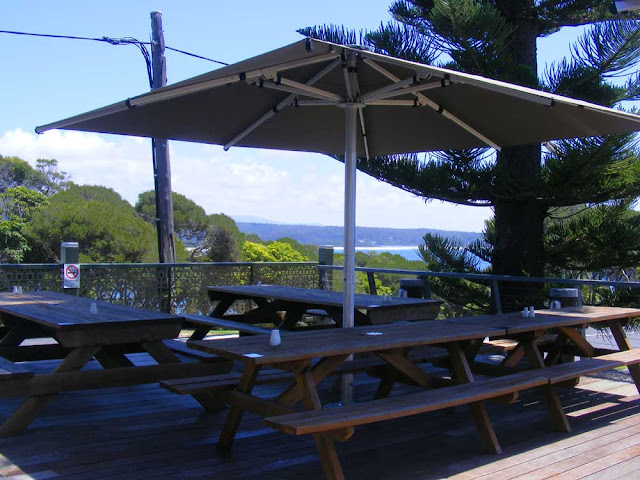 Then, last weekend I was looking at the Australian newspapers and noticed there was a grass fire in the Bega region, not far enough away from Rick and Helen's house to make everyone feel secure. I kept an eye on the progress of the fire as it marched into the forest and unrelentingly the 10km towards Tathra, crossing the river in the process. The fire started when some electricity lines were bought down by falling trees (according the the power company there were "extreme weather conditions" at the time).


The view looking in the other direction . 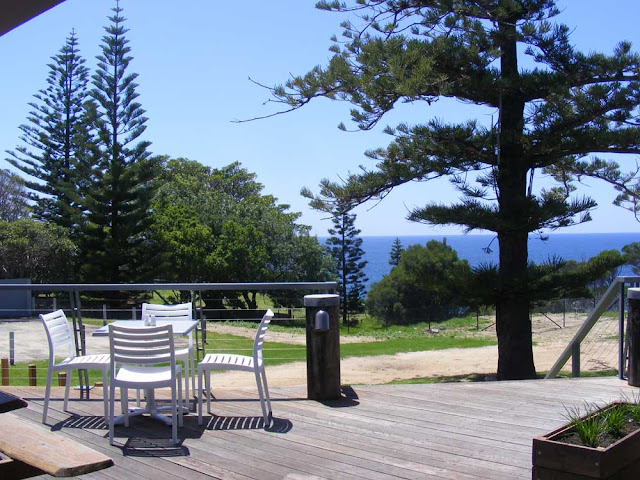 Tathra is only a small town, with a population of 1,622 people. So far the count is that 69 houses have been totally burnt out, 39 houses damaged, and 30 caravans or cabins destroyed. They have also lost the bowls club, supermarket and primary school. Luckily, no-one died in the fires, although many people have lost just about everything else.

The pub in December. 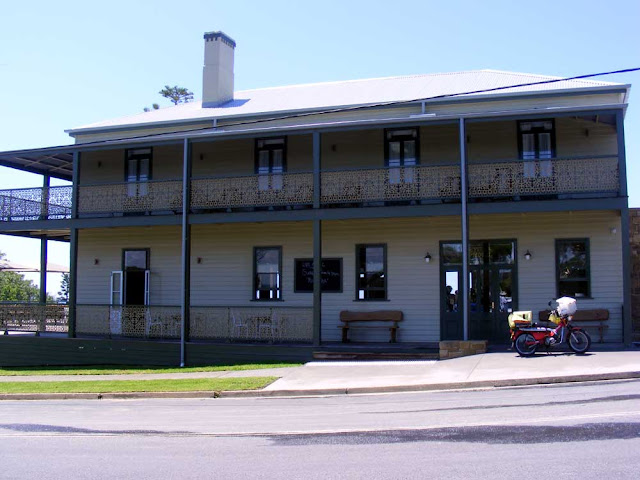 Also luckily, the old Tathra pub has survived. On Thursday they updated their facebook page and wrote:

"We managed to get permission ( with a police escort) to go to the hotel this afternoon to retrieve staff records so our staff can be paid.
The hotel looks untouched by the fires but we were surprised to see the bush between the hotel and the ocean still smouldering. While we were there it flared up and the helicopters were water bombing.
The power was on so hopefully we may be able to get back in tomorrow and prepare to reopen.
Feel very lucky as some areas look very bad.
Thanks for everyone's messages of help and support."


They were some of the earliest residents allowed back in. One of the reasons it was too dangerous to let people back was there was a lot of asbestos floating in the air. Many old beach shacks and holiday homes are made from asbesto sheets.

The pub has subsequently announced that they will be open, but all their food stocks have been destroyed because the power went off and the freezers weren't working, so they can't offer much in the way of a meal. We wish them all the best and hope to be back one day for one of their gourmet burgers and a beer.

Terrible things... Glad the old pub survived. Elizabeths cousin was wiped out in the 1967 Tasmanian fires they had to evacuate to the beach.

Played at this pub with the band Dark Secrets back around 1990. Also have been on a few road trips and lots of cruising around Canberra with Simon back in the early 80’s. Happy days!

Welcome to the blog, Bruiser. Fun days indeed - imagine how much fun it would have been if we had known what we were doing!

Yes, my family lost several houses in 1969 (known as the Lara fires). I can remember seeing the flames coming over the hill in front of our house and my father and uncles going out to fight the fire or coming back covered in soot.

Comment from Christine: I have just tried making a comment to Simon's post on the Tathra fire. Not sure if I followed enough technical steps to join the blog.
There is a class action being mounted against the energy company by Slater & Gordon who represent those who have lost their homes (69 properties were reportedly lost).
We felt very very sorry to hear that news. At the same time, in central western Vic, we had friends (now elderly) who own a magnificent old property 'Gnotuk' which is situated overlooking the crater lake of the same name, staying up all night with their bags packed, as they watched fires burning around the rim of the lake (fortunately on the south side). I wrote to them and they and their property are fine, but one property was burned and many farm and wild animals.