Manly is seven miles from Sydney, and a thousand miles from care, according to the advertising for the Port Jackson and Manly Steamship Company in the 1920's. Although the Steamship Company no longer exists (it ended up in government hands in 1974), Manly is still the place that millions of Sydneysiders head to every year to relax.

Being on the other side of the harbour to the city of Sydney there is really only one logical way of getting there, and that's by water. You could catch a bus, but that's about an hour of hauling through suburbs (before you factor in traffic), whereas the Manly Ferry takes 30 minutes and gives you one of the best views of a large city you are ever likely to get. I have mapped the Ferry route (and some of the sights) here.

The ferries themselves are 1980s replacements for various classes of 1920's and 30's ferries and are 70 metres long, 12.5 metres wide, displacing 1,140 tonnes. They are capable of carrying 1,100 people at 16 knots. They may not be as stylish or as fast as the boats they replaced, but they still make for one of the world's best commutes.

When the weather is very rough the ferry sometimes gets cancelled, which must be a bind for people who rely on it, but even on the hottest of days you get a cooling breeze. The most "exciting" section is when the ferry crosses the gap between South Head and North Head, and experiences waves that have rolled across the Pacific Ocean. The rest of the time it is just amazingly scenic, with views of some iconic constructions.


The temperature was 47C the day this was shot

We love the Manly Ferry, and when we stayed at my brother's apartment in Manly we used the ferry as much as we could. Even when the weather is dull or wet it is an experience, and on the coldest or wettest of days you can always sit inside the cabin and make use of the free Wi-Fi.

And no matter the weather, you can always take some photos. 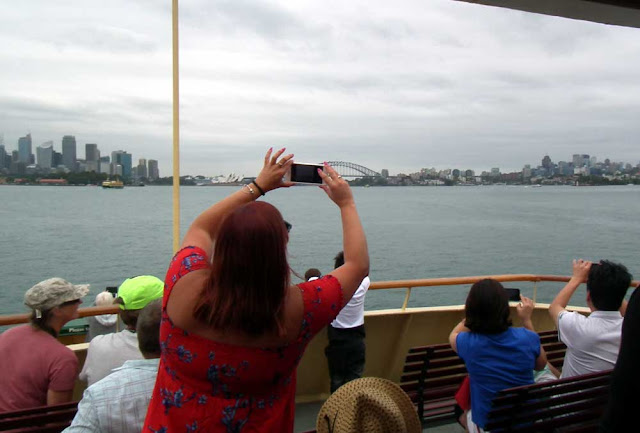