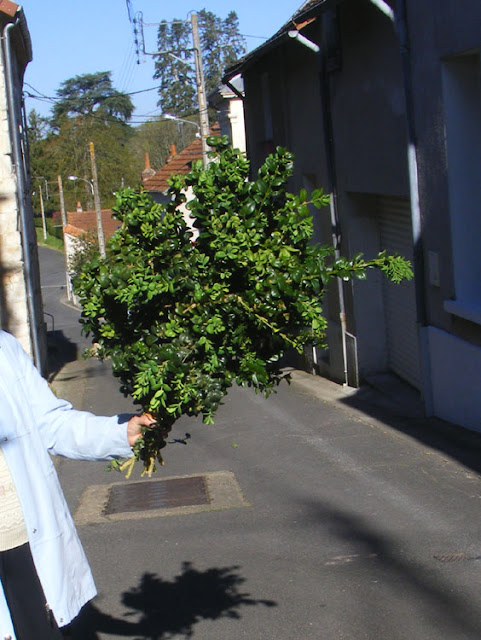 Today is Palm Sunday, but in Preuilly you won't see people carrying crosses made of palm fronds. They will be carrying big bunches of Box Buxus sempervirens (Fr. buis). At least they would have been in the past. With the arrival of the Box Tree Moth I don't know what people will do. Almost everyone I met in the street last year, including in the bakery, was carrying a bunch of box cut from their own garden and heading for the church service. The bunch in the photograph is held by our florist neighbour. I asked to photograph her bunch because it was particularly large and I commented that in Australia it is not used like this. She asked me what was used and wondered if it was olive. At the time, I didn't know because I've never attended a Palm Sunday service, but after I'd thought about it, I think real palm leaves are used in Australia. Simon says his memory is of palm leaves woven into crosses.

I wonder how the use of box in the Touraine will evolve now that the Box Tree Moth has arrived?

We agree with Simon. We only commented this morning that we both remember the palm crosses given out at Sunday school. Elizabeth remembers making them at school for Palm Sunday but then again she was RC.

Is there anything that can be done to eradicate the Box Tree Moth? Where does it come from?

A few years ago, I was visiting in the Lot Valley and I was surprised to see the many Box trees growing wild there.

The moth comes from China and entered France via Germany about 10 years ago. There is no chance of eradicating it because box grows wild in the forests on limestone soil.

When one lives out in the middle of nowhere, like we do, we miss all this. And, shame on me, I didn't even remember Palm Sunday. I'll ask in class tomorrow what they do around here. Now I'm curious

They use olive in the south of France. You are probably still in box country I would guess.