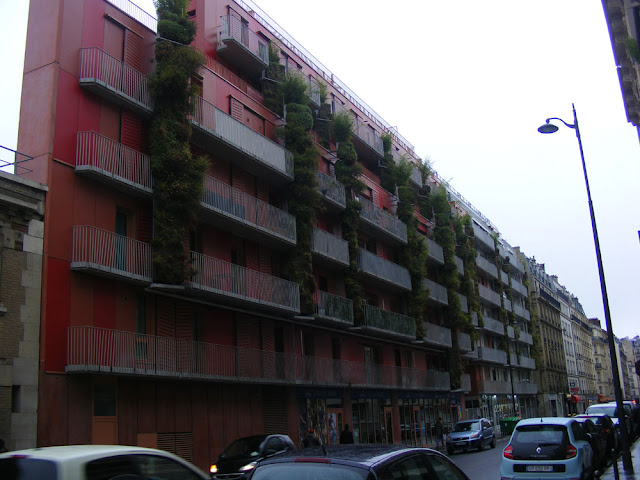 This block of flats in the 15e arrondissement of Paris has been recently renovated and given trendy living walls. It forms one street frontage of a big urban renewal project currently underway in the Métro Ligne 12 railway workshops that occupy the triangle of land behind. However, according to the plans of the project I've looked at it falls outside the railway workshops regeneration boundaries. I assume an independent developer has piggybacked onto the project but I can find nothing about this building. It has certainly been restored in the spirit of the railway workshops, which are promising extensive tree planting and roof gardens.

Further down the street (rue de la Croix Nivert) you can see the building where we rented an apartment for our Rétromobile long weekend. We were on the sixth floor with no lift.

So, now, you're getting closer to my neck of the woods.

The building pictured is a Ciel rouge creation project, a so-called social housing. It seems to have been built only a few years ago. Here is another link in French.


Many years ago, in the '40s, I used to visit a friend of mine who lived on rue Croix-Nivert, close to rue Lecourbe, not far from this new development. Old memories!

Thanks for the links.

The street view is deceptive. If you look at the plans on the links provided by chm above you can see it is a much deeper and bigger building that it appears from the street.

Was it François who was living in that neighborhood?

No, François lived in a completely different neighborhood, close to the bois de Boulogne.