George and the Unicorn 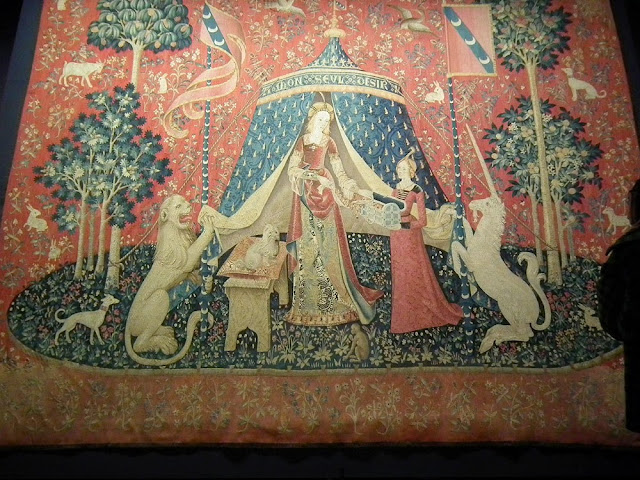 This year the extraordinary group of tapestries known as La Dame et La Licorne will be on loan to Australia and displayed in the Gallery of New South Wales from 10 February to 24 June, while their usual home in Paris is closed for renovations. We are lucky enough to have seen the tapestries a couple of times on visits to the Cluny Museum in Paris, but it wasn't until recently that I read the story of their discovery in the 19th century and how they came to be in the Cluny's collection.


The panels depicting hearing or joy, and sight or leisure.
Joy is playing her portable organ, Leisure is enticing the unicorn in her mirror. 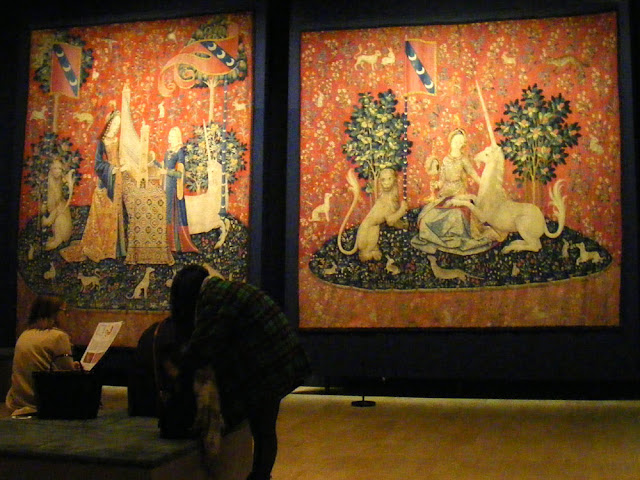 In the early days of the 19th century a little girl called Aurore Dupin would come down to the Berry countryside to stay with her grandmother in Nohant-Vic. Later, as a young woman with her own young family, she inherited the house at Nohant and came to live there to escape her husband and the political troubles in Paris. Although Aurore came from a wealthy family, because her husband controlled the purse strings she was forced to earn her own living. And thus, the novelist George Sand was born.


A genet, domesticated in medieval times in preference to cats to catch rodents around the house. 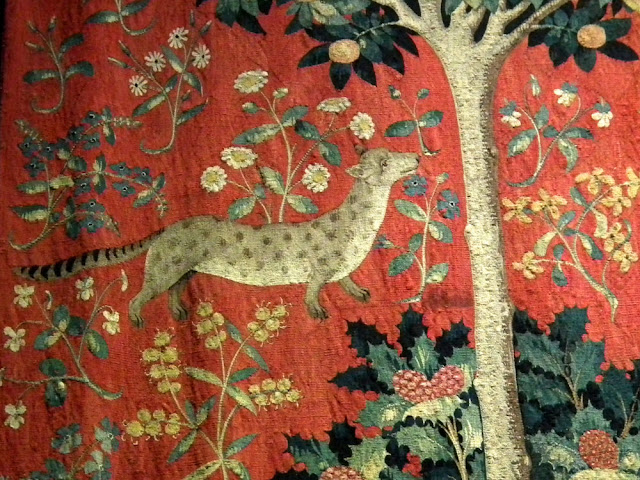 At Nohant Aurore/George was free to indulge love affairs with Chopin, Prosper Mérimée (Inspector General of Historic Monuments) and the artist Manceau, amongst others. Her children were raised in an atmosphere of creativity and independence. Everyone in the household wrote, made art or performed. 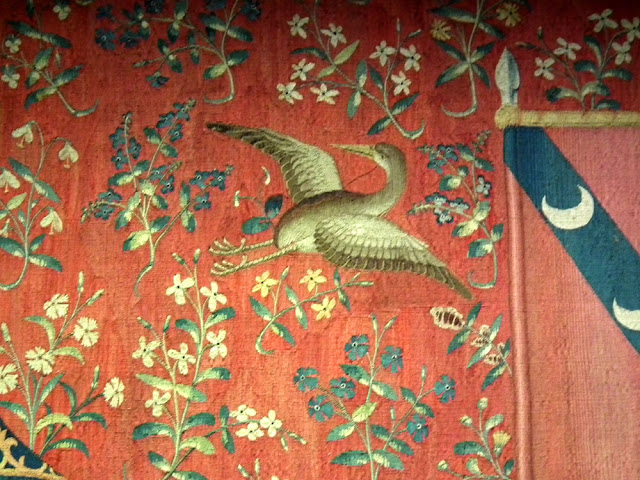 In the 1830s and 40s many wealthy aristocratic and bourgeois people quit Paris as the political situation was not stable. One of George Sand's friends holed up in Boussac in the Creuse and set up a printing press there. She visited several times and on one of these visits came across an extraordinary set of tapestries hanging in the local chateau, at that time the offices of the local authority. She saw immediately that they were something special and invited Prosper Mérimée down to view them. As a result they were heritage listed in 1865 and in 1882 sold to the Cluny.


The lion, who appears in all the panels, carrying the crescent moon arms of Antoine le Viste. 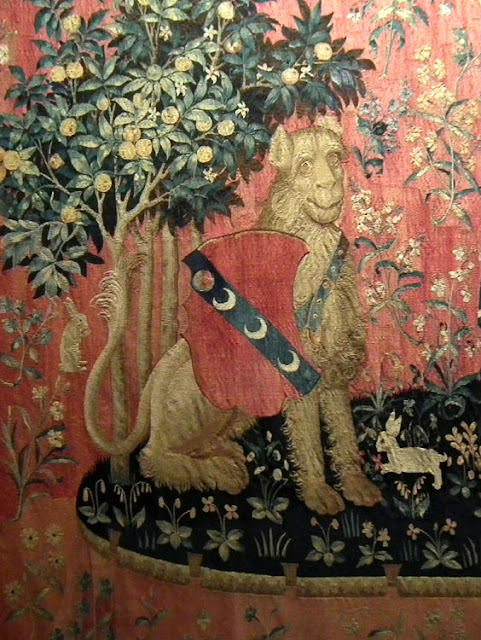 The medieval Chateau of Boussac was one of George Sand's favourites and she used it as the setting in one of her novels, describing it as 'irregular, graceful and pretty in its simplicity'. Who commissioned the tapestries was long a mystery but recent studies suggest that it was Antoine le Viste in about 1500. The modern scholarly opinion is that they can be read in multiple ways and represent both allegories around the five senses and the six Courtly Virtues of Guillaume de Lorris's Roman de la Rose (frankness, beauty, joy, largesse, riches and leisure). In addition they contain a bestiary and a flora. Antoine le Viste was married to a member of the powerful Tourangelle family the Briçonnets (who built Chenonceau and Candé about a decade after the tapestries were probably woven). The mystery surrounding the set of tapestries is compounded and continues because George Sand wrote of eight panels -- and yet only six exist at the Cluny.


A terrier on a cushion, in 'Mon seul desir'. 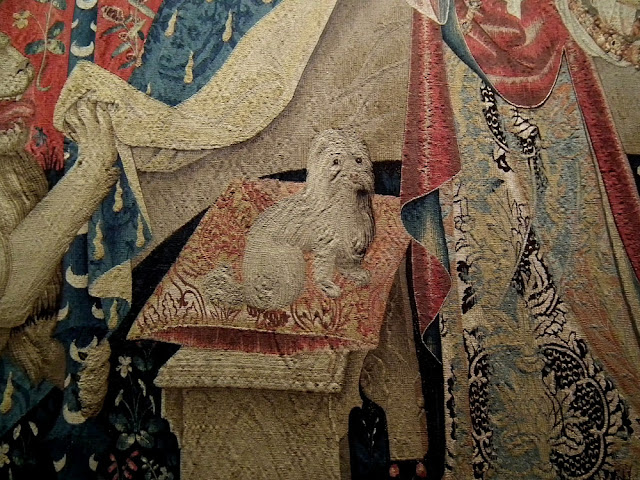 Prosper Mérimée mentions in correspondence that he was told by the local mayor that there were other, even more beautiful tapestries at one time in the chateau, but a former owner had cut them up to make cart covers and carpets. Were these the missing panels, or is there some forgotten corner of the chateau hiding them behind a collection of battered furniture or rolled up in an old cart?

In later years a Leonardo da Vinci cartoon was found rolled up in the attic of Castle Howard in N.Yorks, UK. Memory says that it got sold for £6 million and paid for a divorce settlement. No such treasures in Chateau Potty !

Shame on me, even though I lived in Paris for the first forty-five years of my life, I never went inside the Cluny Museum! These tapestries are magnificent.

Thank you, Susan, for another wonderful post. How nice of the Cluny to send the tapestries all the way to Australia rather than just across the Atlantic or to somewhere in Europe.

I think the La Dame à la licorne tapestry could be categorized as a so called mille-fleurs tapestry.

It was a drawing by Michaelangelo, found bound into an 18C album of drawings unattributed. Simon Howard used part of the 9.4M gained by selling a Reynolds portrait as the divorce settlement for his first wife.

Indeed shame on you. The Cluny has lots of great things. La Dame à la licorne are millefleurs but they are also stylistically different to other millefleurs.

Australia was presumably prepared to pay the most to have them.

Thanks for that I wonder what other stuff I have got all mixed up.