When we were in Beijing last year we were on a more or less standard organised tour. The main difference is that instead of the "Special Peking Roasted Duck Dinner" that most tours include, we opted for a visit to a street food market.


Where we ate in Beijing 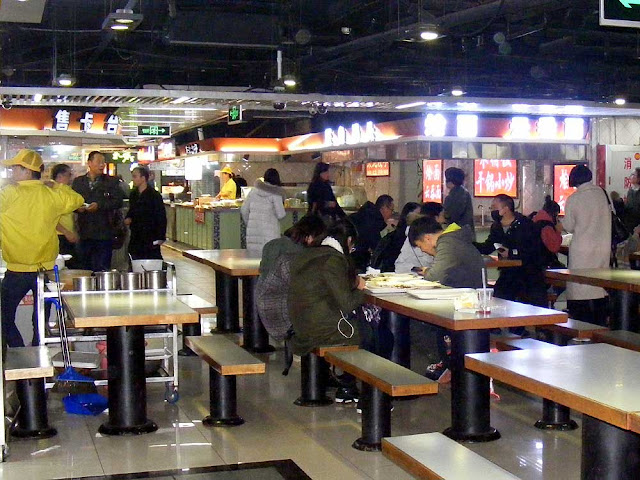 Peter (our guide) explained on the day that the most famous of Beijing street food markets was definitely for tourists only, being weird "look what strange people the Chinese are - who eats scorpions and bugs?" type food (that needless to say, Chinese people only ate during the most fraught period of the Cultural Revolution) or another, less touristic street that had recently been closed due to hygiene issues. We walked down those streets anyway, before Peter led us into a department store and down two flights of stairs.


The debit card and recipts 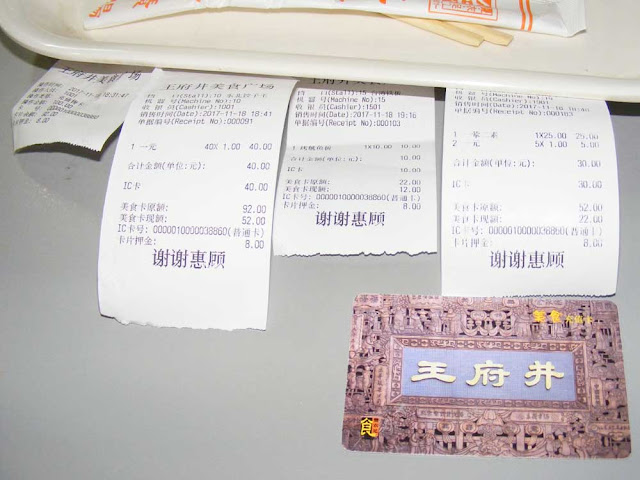 We had our dinner in what can only be descibed as a food court, but one that we would never have found if left to our own devices, and furthermore one that we would never have figured out of our own accord as the payment was by debit card system. The card was purchased from a central booth for 100¥ (100 Yuan Renminbi, 12€75), of which 8 ¥ was for the card, leaving us 92¥ to spend. 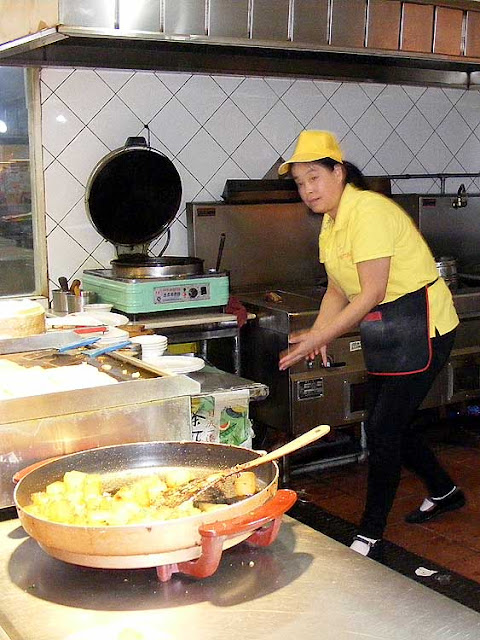 There were about 20 small kitchens, all producing food to order.  We spend 20¥ each on a bowl of dumplings, one fried and one as dumpling soup - and there was about 12 dumplings in each meal. Peter ordered a mixed combination for 30¥, and then I ordered squid on a stick for another 10¥. This means all up for more food than 3 people could jump over we paid 80¥, or 10euros. 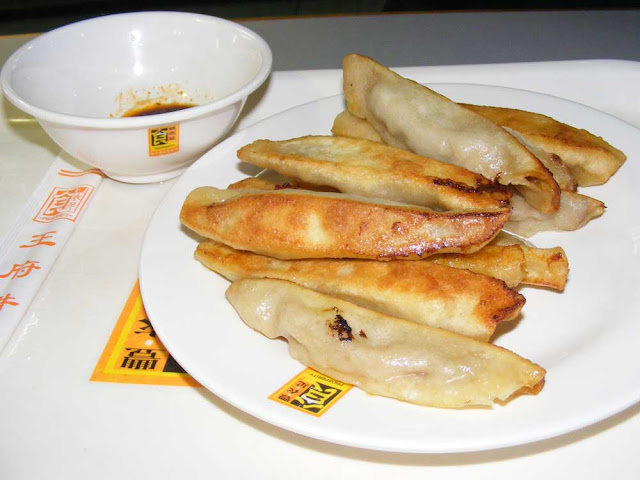 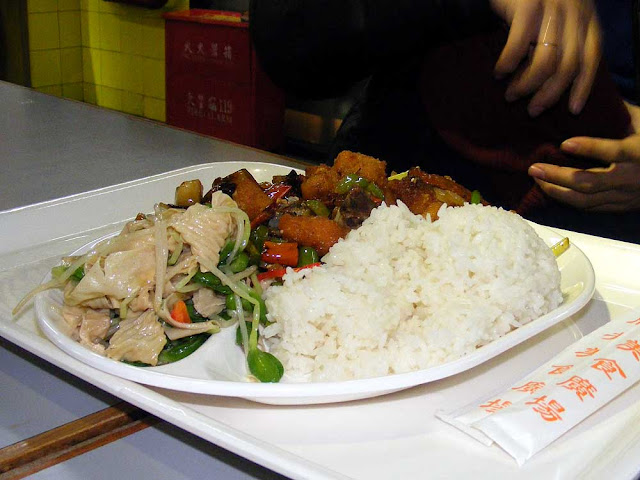 After the meal we returned the card to the booth for our refund - but of course, most people keep their card and top it up as required, as they would eat a meal there on every working day.


Squid on a stick (whilst being
photobombed by a local)* 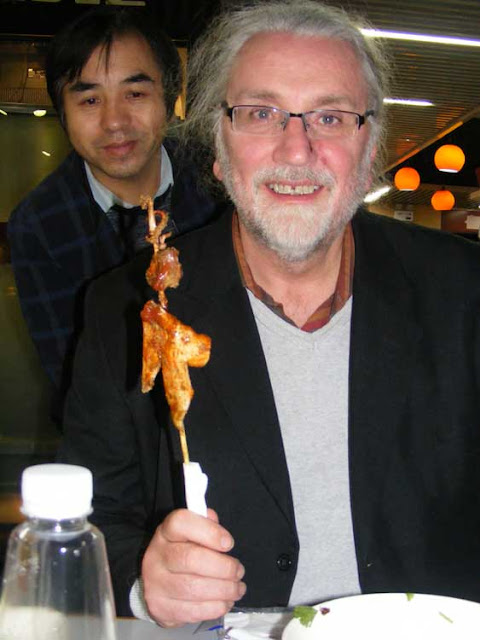 The result is that we returned to the airport overflowing with authentic Chinese food, having spend not much money at all, and having had a proper Beijing experience.


*also my best Spike Milligan impersonation.
Posted by Simon at 09:00

Yowzers... you had yowzers....
it is a long time since I've had those.
Pauline's Chinese lodger, a lecturer at Leeds Uni, was from just outside Bejing... and she'd regularly have a yowzers party with her friends round.
They would take over the kitchen table... some making the stuffings [note the plural]... the others making the dough and rolling it into little discs.
The last part was accomplished without looking, apart from picking up a ball of dough.
The whole thing was fantastic to watch... and listen to as, naturally, they were yapping away in chinese.
Once a huge pile of discs had been accumulated... usually 80 to 100... the stuffing and steaming began.... the first ones were allowed to cool and ended up as fried yowzers as in your picture... the last out were eaten hot.

I love fried yowzers.... whilst, according to Dung Chow [yes, that was her real name] they are available all over China... they are a Bejing speciality food... because that is where they originated.

And I love the "rat-ona-stick" picture... the local looks as though he would willingly grab that off you if you didn't want it!! He only has eyes for that squid'n'chikkin!

The advantage of hiring a proper guide!! Presumably the locals go to the street markets to get entertained by the strange food that the tourists are willingly consuming!!

Her written full name was actually Ping Dunchow... but she used to pronounce her first name as Dungchow!!...and her surname as Pin... almost as if the 'g' jumped from one half to the other.
She was lovely... her English husband was a complete waster and con-artist!!

Good evening.
Japan is eight afternoon on 4th,
Thank you for a wonderful newsletter. Always waiting forward to.
The snow festival of Hokkaido Sapporo is held.
Ryoma.