Meeting Our Member of Parliament

On Friday 16 February I met with Sophie Auconie, our local députée.  She is our representative in the Legislative Assembly and our consituency is the Lochois (3e circonscription Indre et Loire), in otherwords, the south Touraine, around the town of Loches.

I wanted to talk to her about Brexit and the impact it was having, and will continue to have for some time, on British residents of the area. She was holding a surgery in Preuilly and her assistant suggested that would be the simplest way of meeting her.


Sophie Auconie (left) and me. 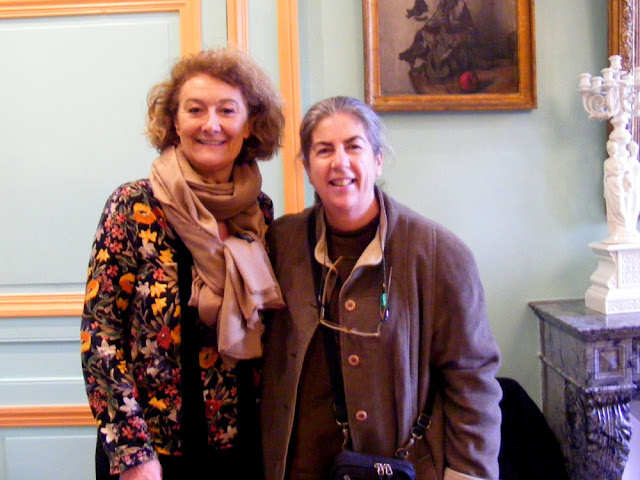 I wrote a briefing document outlining all the issues of citizens rights that we are worried about and my friend Alain translated it into French. He also came with me to the meeting. I am very lucky to have Alain available. His French is impeccable and he actually enjoys politics and getting involved.

Mme Auconie was pleasant and came across as sincere and open. She told me that she knows Michel Barnier, the EU chief negotiator, very well. She's worked closely with him in the past, when she was an MEP, and has considerable respect for him, saying he is extremely diplomatic. I must say I have been impressed with his performance and patience in public. From the start he has placed citizens rights up front, and Mme Auconie feels sure he will continue to do so.

She said I was the first British resident to contact her about this but she was well aware that there were quite a lot of Brits in her constituency. She has also been following Brexit a bit more closely than some as she has several good French friends living in England and they have been in touch with her to express their concerns for the future. She assured me that we have her full support.

One of the questions I asked her was what her feel for how the French would administer the change of status for British residents in France once the date comes. EU countries have a choice of requiring a simple declarative statement of circumstances, or they can go down the more complicated route of the notorious 85 page settled status form that Europeans in Britain were going to have to fill out, along with no doubt providing endless supporting documents to prove their details.

She felt that administratively the second option wasn't practical or necessary for people who are long established in France. Probably, she thought, France would opt for a form on which people stated their name, when they arrived in France, gave bank account details and indicated that they could support themselves.

At the end of the meeting she urged me to stay in touch and to pass on to her any new information, especially if it was something causing concern amongst local British residents.

Both Alain and I thought the meeting went well. On my way home I ran into a British resident and naturally updated him. He was supremely unimpressed and uninterested, taking the view that nothing will change.  He didn't have a very high opinion of Michel Barnier, who he refers to as Little Napoleon, because he's short and dictatorial, apparently...

Whatever will be will be...

I'll keep my fingers crossed that Brexit won't be too harsh on you and won't have any durable negative effect. A cousin of mine has been living in London for years and he thinks nothing will change for him and his family. I hope he won't be disappointed.

No, some of what will be will be because ordinary people kick up a stink and make their voices heard. The situation is so complicated that no one is on top of it all, and the negotiators need all the input they can get.

He's both right and wrong. In the long run daily life won't change to any discernable degree, but there will be paperwork (to formalise a status that we already have and didn't previously have to do anything for) and a monetary cost. He may also fall foul of the loss of Freedom of Movement, as we will if that is not sorted out.

Is that not part of the problem Susan "Complication" Politicians have problems with simple i.e. they make simple complicated. Complicated they can't deal with and with multiple inputs... In the UK they can't agree amongst themselves, forget about external input...I rest my case.

European politicians seem to be coping OK with complicated...