Saint Balthild of Ascania may have been an Anglo-Saxon, and a relative of Ricberht, the last pagan king of East Anglia. She may then have gone from noble born (in 626 or so) to slavery as a young girl under Erchinoald, a nobleman who served Clovis II, King of Burgundy.

When Erchinoald's wife died he is said to have attempted to marry Bathild, but she ran and hid until he set his sights on someone else. She then suddenly married Clovis, by whom she had three sons. She was famed as queen for her modesty and humbleness (a common claim for early medieval queens), and for endowing abbeys across Burgundy, 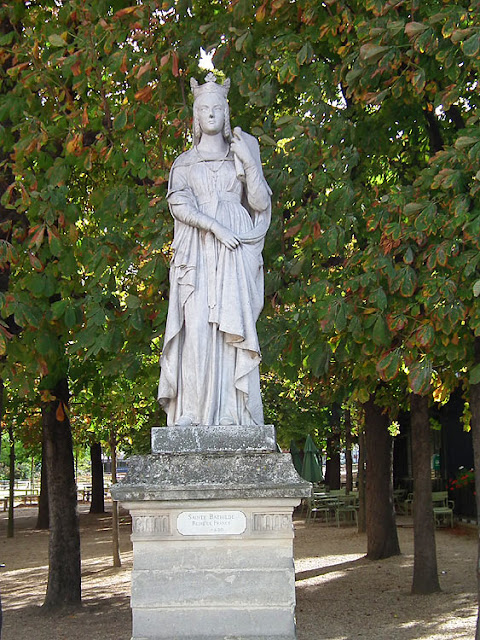 When Clovis died, Bathild acted as regent for her eldest son, with a reputation for ruthlessness particularly when it came to dealing with the Church. She had a reputation for placing tame bishops (after having - maybe - disposed of the previous incumbents) in troublesome towns. But her main claim to fame is that she pushed hard to make owning Christians as slaves illegal, and spent large amounts of money buying and freeing Christian slaves.

Bathild died in 680 and was buried at the Abbey of Chelles, east of Paris. A tunic, said to be her burial shroud, still exists.

The Jardin du Luxembourg has statues of 20 French Queens and Illustrious women. The subjects were chosen by Louis-Philippe I in 1843. This statue was created by Victor Thérasse in 1848. To see Bathild you have to go here.

I've enjoyed reading about all of them. Thanks.

I second what Sheila said.