There is almost no doubt that Sainte Genevieve, Patron Saint of Paris, was a real person. She was born in Nantes in the early 5th century (some time between 419 and 422) and died in Paris in the very early 6th century. Her main claims to fame are her abstinence (she seems to have abstained from everything) and the fact that she saved Paris from Attila the Hun and the Merovingian King Childeric I.

Genevieve first came to people's attention when she was but a youth. She attended a sermon by Germanus of Auxerre and declared she wanted to be a nun. To prove her commitment she decided to be purer than anyone else (hence the abstinence), something she eventually had to be talked out of. 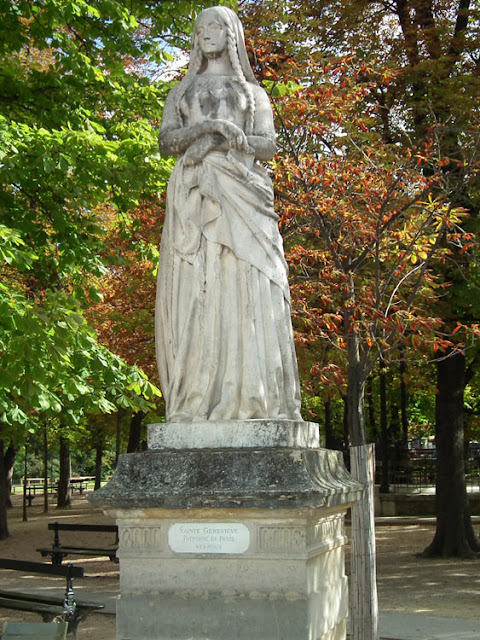 When Attila the Hun looked like he was going to attack Paris in 451 it was decided by the Bishop of Paris that Genevieve should be the person to lead a prayer marathon. This was successful - in that Attila decided to attack Orleans (which was probably a richer target) instead. In 464 Childeric laid seige to Paris, and Genevieve managed to pass through the seige lines (probably quite easy for a religious person of note) to Troyes, where she arranged for a shipment of grain to Paris.

All this means that by the time she died (some time between 502 and 512) she was already considered a saintly person, something confirmed by Clothilde (remember her?) the second wife of Childeric's son Clovis. She was buried in the Benedictine Abbey later dedicated to her name, which was rebuilt by Louis XV as Saint-Étienne-du-Mont, where her tomb can be seen alongside the graves of Blaise Pascal and Jean Racine.

The Jardin du Luxembourg has statues of 20 French Queens and Illustrious women. The subjects were chosen by Louis-Philippe I in 1843. This statue was created by Michel-Louis Victor Mercier 1845. To see Genevieve looking abstemious you have to go here.