The other week went went up to Paris to visit Retromobile. As I mentioned about a month ago, I had bought Ouigo tickets for 10€ each, one way from Saint Pierre des Corps to Paris.

Catching a Ouigo train is more complicated than a normal TGV as you have to be at the station early to check in, and you have to book space on the luggage rack (for 5€ extra, this is the low cost airline of train travel) for each suitcase other than cabin luggage. Tickets can only be bought online, but at the moment they are all 10€ per person each way.

The other difference between standard SNCF trains and Ouigo is that in the big cities they don't use the "normal" stations. When they started the limited services from Paris started at Disneyland, but now they also use the un-touristy end of Montparnasse station - Hall 3, which is where suburban services and trains to places like Chartres tend to leave from 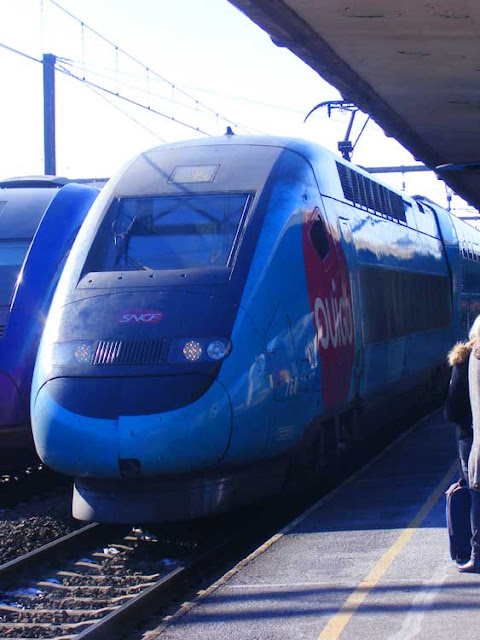 Having said that, the service is good. The trains are modern, latest but one generation of TGV, and clean (if a little too aqua and hot pink inside and out), and the announcements are plentiful and intelligible. This was especially important as the train was late arriving at Saint Pierre des Corps, and travelled slowly and then stopped a couple of times once it did arrive. This wan't Ouigo's fault - it was extremely cold, and there were problems with snow and ice so all trains were delayed (except the ones that were cancelled).

We arrived in Paris 90 minutes late, but by the time we arrived at our apartment we have already been sent an email saying we would get a partical refund of our tickets.

We will take them up on that - 10€ to Paris is a exceptionally good deal, and now we have used the service we feel we have de-mystified it, and next time should be all confusion free.