Where to start with this one...

Mathilde was born in about 1031 and was descended from most of the Royal Families of Europe - in the times when there were many Royal Families in Europe. This made her a worthwhile catch for any aspiring Duke or Baron, and the Duke most interested was William the Bastard, who as a bastard she felt was below her dignity. Stories of how William convinced her to marry him vary, but they all agree that he dragged her to the ground by her braids (quite how this helped....).

Of course, being nobility they were quite closely related: enough, in fact, that the Pope forbade them marrying - which they did anyway in, 1051. (The marriage was recognised by the following Pope 8 years later). 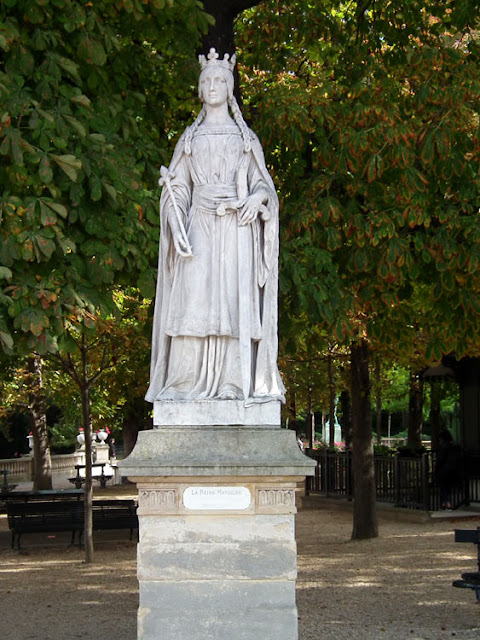 After William invaded England and became a Conqueror rather than a Bastard, Mathilde became Queen Consort of England in addition to Duchess of Normandy. Of course, the fact that one of the families she was descended from were the Kings of Wessex helped - she had a couple of extra clauses put into the coronation ceremony to acknowledge that it was God who put her there, and that she shared her husband's power.

She had at least 9 children, four sons, and 5 (or more) daughters. The history of the sons is well known: the eldest (Robert) becoming Duke of Normandy after his father died, and sons 3 and 4 (her second son died as a child) becoming Kings William Rufus and Henry  I of England.  Although she visited England to be crowned in 1068 she spent most of her life in Normandy, usually in Caen, which is where she was buried in 1083. The original grave marker is still in situ in the Abbaye aux Dames in Caen.

The Jardin du Luxembourg has statues of 20 French Queens and Illustrious women. The subjects were chosen by Louis-Philippe I in 1843. This statue was created by Jean-Jaques Elshoecht 1850. To see Mathilde (and her braids) you have to go here.

She was very nifty at needlework and crafted the so-called tapisserie de la reine Mathilde in Bayeux! In fact, she commissioned it and it was probably made in England.

Once again, before posting I should have checked with Wikipedia. Now, it seems the "tapestry" was probably commissioned by Odon de Bayeux, William the Conqueror's half brother.

Just like the Dame à la Licorne, the Bayeux Tapestry will travel abroad in 2022, but this time not as far as Australia; it will just cross the English channel.

Moving the Bayeux tapestry will be a much bigger and scarier operation than moving the Dame à la Licorne group. I don't envy the conservators and art movers responsible.

PS I'm amused that you know the word nifty and impressed that you can use it correctly :-)