Ten days before we drove The Lions Road we were in Brisbane. My mate Matthew (whose brother it was recommended The Lions Road to us) asked if I knew Mount Glorious, and suggested it as a road worthy of the Idiot Wagon.


The view from the Western Window 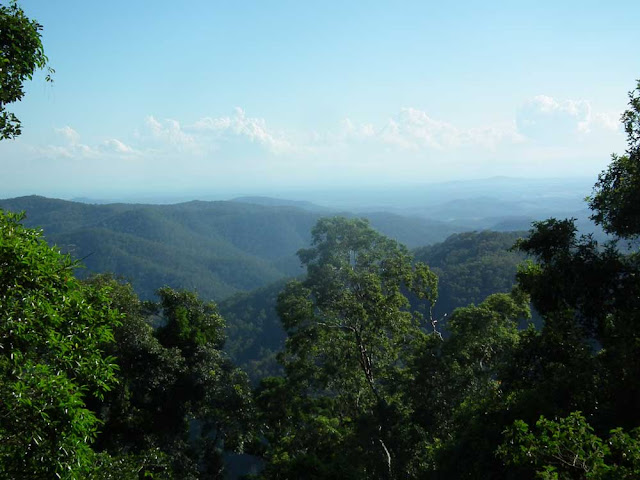 He was right - the road up Mount Glorious (the Mount Glorious Road) and down the other side (Northbrook Parkway) is an amazing piece of road if you're in a car, although motorcycle riders will have to be careful of lumps, bumps, seams down the middle of a lane, and other traffic. Unfortunately, many people see the road as a racetrack, and as a consequence the road toll, mainly single vehicle accidents, is quite high. The police are usually out in force at the weekend and we saw evidence of this. There are also signs by the roadside warning drivers not to hoon (don't laugh).


Having said all that, the road really does live up to its name, and if you take time to stop along the route there are some amazing lookouts and views over proper sub-tropical (but only just) rainforest.  We didn't make many stops, as I was on the hunt for a half watermelon (long story...) and time was getting on.  We did stop at the Western Window and one or two other places, but photos just don't do it justice.

A wide variety of introduced trees (Jacaranda),
palms and other native rainforest species. 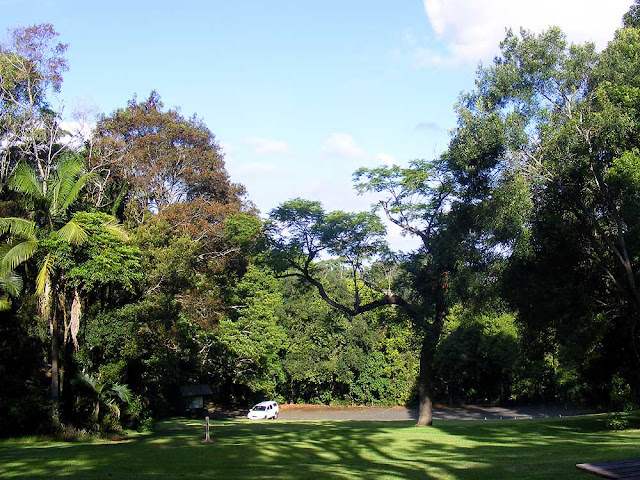 
Susan was hunkered down in sports car mode and I had my hands full of
steering wheel which is why there is a streetview pic here. 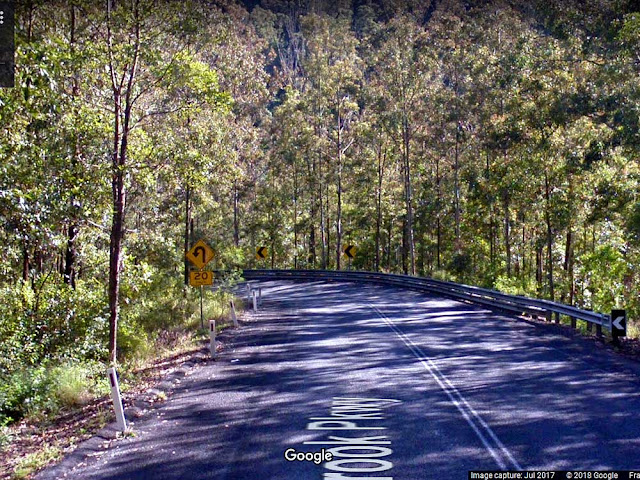 When we arrived back in Pittsworth, Susan's family were amazed that I lived in Queensland for almost 10 years yet had never heard of the Mount Glorious Road, but I had an explanation. As soon as I arrived in Queensland I joined a band that spent much of its time out west, so although I knew many of the dypsomanic publicans of South East Queensland, Brisbane was somewhere one went on a quick shopping trip, not sightseeing.

The music I am using for these videos are all Australia rock classic. Todays music is "Hard Road" by the late, great Stevie Wright (previously of the Easybeats), featuring the also no longer with us Malcolm Young, later of AC/DC. The second track is "Standing on the Outside" by Cold Chisel, a band which had amazing success in Australia, but virtually no profile in the wider world.

Can't wait to get the 2CV on the road again and do a lot of HOONING!!! As Billy Connolly said if the world needs an enema they will stick it in Brisbane. Never been so can't comment!

I'm not sure a 2CV is capable of hooning - unless it's post modern, ironic hooning...

When I get that 3ltr V8 under the bonnet it will. Otherwise it will have to be load music... Oh dear no radio!!!