Bertrada of Laon was born some time between 710 and 727, and as was common with French royalty managed to gain an unflattering epiphet:  Bertha Broadfoot ( Latin: Regina pede aucae - the queen with the goose-foot). Quite why is unknown, because contemporary sources don't mention any deformity, and the name only appears in the 13th century.

Bertrada's father was the Count of Laon, and in 741 she married Pepin the Short, son of the defacto ruler of France Charles Martel*. As was quite common with nobility in the medieval period Pepin and Bertrada were too closely related for the church's liking, so it took until after the birth of their first son (Charles, in 742) before the marriage was officially sanctioned. They went on to have seven (at least) children, of whom three survived to adulthood. 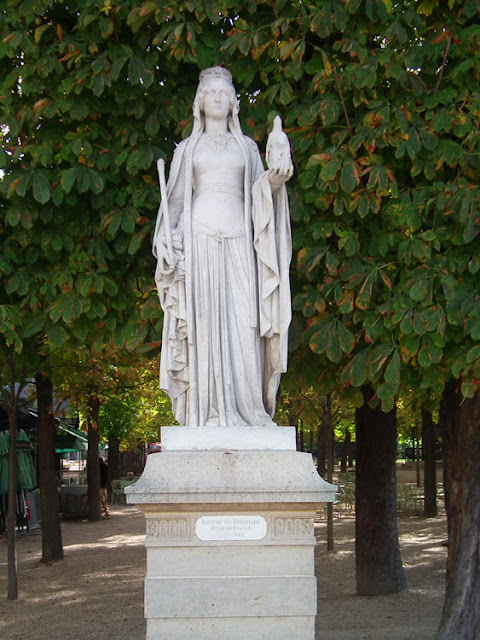 In 751 Pepin contrived with the pope to overthrow the Merovingian King Childeric III (a man placed in power by his father) and they became King and Queen of the Franks, something that their eldest son Charles was to exploit to the fullest. (He inherited half of his father's kingdon, and then when his brother Carloman died in mysterious circumstances gained the other half. He is now commonly known as Charlemagne).

After Pepin died (768) Bertrada lived at the court of Charlemagne, and her diplomatic skills are often credited for the sucess of Charlemagne's early rule. She retired from court when Charlemagne took full control of France, and died in 783. Charlemagne had her buried in the Basilica of St Denis near Pepin - her grave can still be seen there today.

The Jardin du Luxembourg has statues of 20 French Queens and Illustrious women. The subjects were chosen by Louis-Philippe I in 1843. This statue was created by Eugène Oudiné in 1848. To see Bertrada supporting her son (literally) you have to go here.

*It's complicated. Charles Martel was a great warrior and defeated the Arab invaders at the battle of Tours in 732. He gradually increased his power and influence until he was in the postition to appoint his chosen puppet as King of the Franks.
Posted by Simon at 09:00

What the English speaking people know as battle of Tours is known in France as battle of Poitiers. These two cities are about one hundred kilometers apart. According to Wikipedia [?], Charles Martel defeated the Arabs in AD 732 at or nearby neither city, but somewhere in between and closer to Poitiers, i.e. Moussais-la-Bataille, twenty-five kilometers north of Poitiers.

There are three "Battle of Poitiers" - the one at Moussaid is near Chatellerault - we wrote about it here https://daysontheclaise.blogspot.fr/2009/01/battle-of-poitiers.html

Pépin le Bref — what a great name! "The Short" seems prosaic in comparison. He was Charlemagne's father. And Berthe au(x) Grand(s) Pied(s). Very picturesque. Maybe she had a club foot, un pied bot. The town of Laon is really worth a visit, if you haven't seen it.

Thank you for the link. I didn't know that Moussais-la-Bataille was also called Vieux Poitiers. That makes sense and explains why the 732 battle is called la bataille de Poitiers, the only one to get this name of the four battles which took place near Poitiers. In addition to the three you mention, Vouillé (507}, Moussais-Poitiers (732), Nouaillé-Maupertuis (1356) there is the battle of Moncontour (1569) where the Duke of Anjou, future Henry III, defeated admiral Coligny.

IMHO, the Moussais battle is called battle of Tours in English because it is easier to pronounce than Poitiers :—)

Hi, if you want more info about the basilica of Saint-Denis, check this link! https://uk.tourisme93.com/basilica/