The Belgians do not have a reputation amongst people of other nations as being fun loving, exuberant, and eccentric. These are people who have evidently not been to a Belgian wedding.

We went to a Belgian wedding on Friday, and it was probably the most fun wedding we have ever been to. Quite possibly my favorite bit is was what happens between cutting the wedding cake and pieces being delivered to your table:


You can just about see the bride (Caroline) in the middle of this photo. 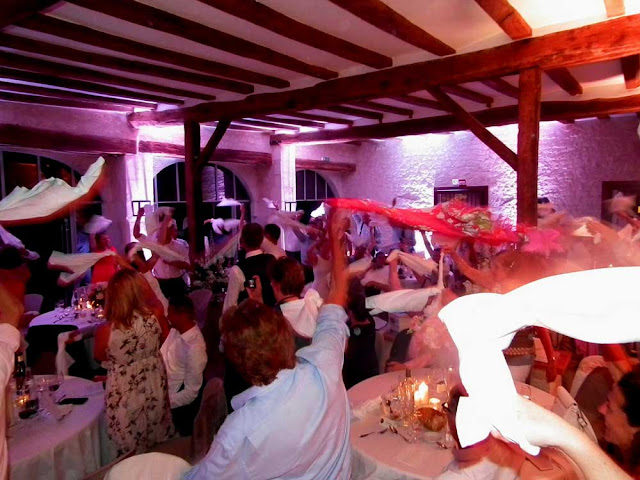 The music starts, people pick up their serviettes (napkins) or their scarves - or even their neighbour's scarf - and proceed to act in a most undignified manner - as shown in this random youTube video taken at someone else's wedding. (I didn't do video - I was jumping about waving my napkin like a loony. Who wouldn't?).


I knew the bride when she used to rock and roll (but I can't see this bride ever stopping!)
Caroline cutting some serious moves on the dancefloor 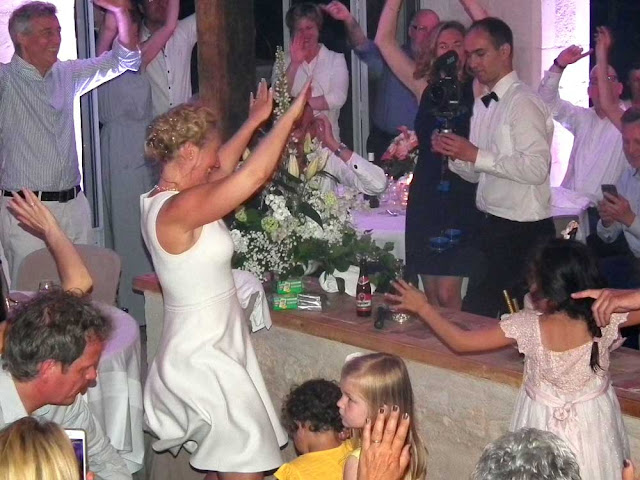 I assume that the napkin waving is a tradition older than the song many people use, and that the actions started on the football (soccer) terraces. I don't care though. It's slightly weird, easy to join in on (even if you have no idea why). We were told it's a Belgian tradition, and that's good enough for me!

The Lakes of Connemara is a song by Michel Sardou written in 1981 with lyrics by by Pierre Delanoë and Michel Sardou, and music by Jacques Revaux.

Having suffered from the heat following a long journey, Jacques Revaux's synthesizer gave a sound close to a bagpipe, which gave Michel Sardou the idea to write a Scottish song. Since neither he nor Pierre Delanoë knew Scotland, Delanoë went to look for documentation but came back with a tourist brochure about Ireland. The lyrics are inspired by John Ford's movie "The Quiet Man".
(from Wikipedia)

Married into a Belgian family I can assure you that the Belgians I know are full of fun and mad as hatters.
Family parties are something to remember...
And now youve made me nostalgic for Belgium in a way in which I never am for France...or the U.K.

Well, obviously you'll have to have a Belgian themed party at your place :-)

Already happened...with real Belgians. Luckily, some of the family come out to see us as Leo doesn`t feel up to travelling these days and they bring food parcels.
I suspect that they get through customs with the loot because they bring supplies of unpasteurised Herve and Brussels cheeses....enough to blow your socks off and certainly enough to unnerve Costa Rican customs officers who blench at the sight of a kipper.