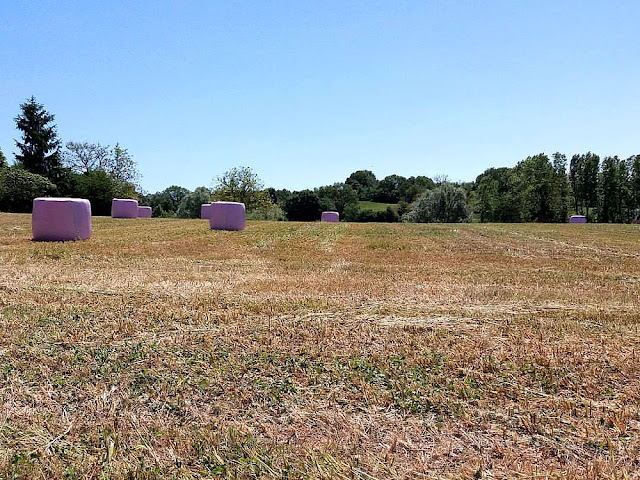 My friend Nicole, from Les Limornières, took this photo. It's a field by her house near Le Grand Pressigny. The farmer has been making hay, and to her surprise it was wrapped in pink plastic. She thought that was fairly uncharacteristic behaviour for the farmer, but we suspect it might be part of a campaign that the manufacturers of the plastic wrap are supporting to raise awareness of breast cancer and raise money for research. From what I've read, part of the proceeds of the sale of this pink wrap goes to cancer research. Roughly 50% of people working in agriculture are women, so it is perhaps not so surprising that the sector may wish to support breast cancer research.

Apparently in France, for each roll of pink plastic bought, the farmer pledges to pay €2 to the Ligue Contre Cancer du Sein (the League Against Breast Cancer). Last year farmers raised €15  000 in this way. After the hay is used the plastic is recovered and recycled. My researches on the internet have revealed at least four manufacturers of the plastic wrap who are involved in the project. Genius I reckon!

They brighten up the landscape as well!!

They are rather fun, aren't they?

I look forward to seeing the fields covered in pink wrapped bales...