Some (unkind) people would say that baffled is my default state. And they may have a point...

Susan mentioned (about a 10 days ago) that our washing machine wasn't working. First it showed the child lock was on, then it showed the thermostat was faulty. After unplugging and plugging it in again both warnings disappeared, but the main control wheel didn't change anything when turned.

Research on the internet told me how to sort out the thermostat, but it was fairly obvious that wasn't actually the problem. I was reluctant to drag the washing machine into the middle of the kitchen floor and  dismantle it, only to find I couldn't fix it. 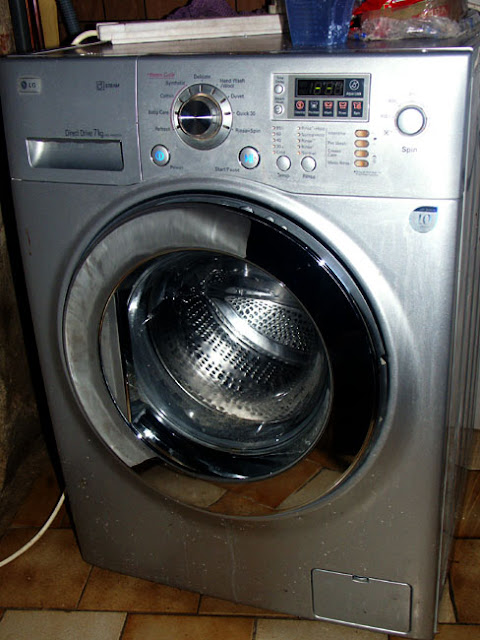 Meanwhile, we took up the kind offers of various blog readers to do some washing whilst I pondered our next move. All the while the machine sat in the laundry, unplugged, until Tuesday afternoon, when I plugged it in, pressed the button  - and it worked.

So I can update my status to "baffled, but relieved".

I'm assuming the main thinky bit in the machine had got wet/temperamental/a bit fried in one of the electrical storms we've had, but has now sorted itself out. It will be interesting to see what happens next time I go to do some washing. (Update - it worked just like normal ovenight last night)
Posted by Simon at 09:00

Simon It just went on strike for better working conditions... Don't overfill it!!

The washing machine fairies visited while you weren't looking!

I think the english equivalent is "you can't get the staff, you know"

I really believe that unplugging such a machine for a day or two can make it reset itself. Ours did something similar, but the problem kept coming back over a period of 3 or 4 months. We finally replaced it.

I sometimes think machines do it to make sure we don't take them for granted. Just moving it out of position, or taking a cover off and just having a look, rather than anything more, shows we've taken a bit of notice. And that seems to be enough. Until the next time....

Result!
The first thing we do if anything goes wrong is to unplug it and see what happens.

In the early days of electronic control we had a machine with similar symptoms. The circuit board was mounted beneath the pump! It worked when the board dried out but the fault came back after a while. A home made plastic cover fixed the problem. You cannot trust designers or engineers. ;)

So you're saying more baffling is needed :)