A house on stumps in south-east Queensland. 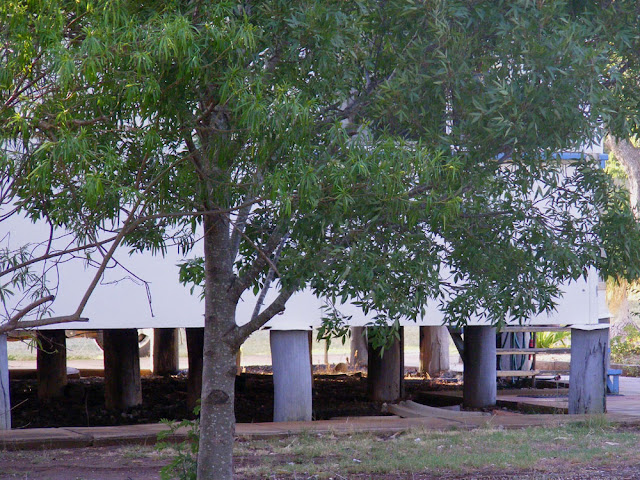 Where I grew up in Australia there was a significant problem with termites (also known as white ants) eating your house. To guard against this wooden houses had to be built on stumps that raised the floor 45cm off the ground and the stumps wore a metal cap that looked like an upside down enamel dinner plate. When I bought my house, which may have been the oldest extant dwelling in the town, it was sitting on stumps which were too low. Because I needed to do major structural work to it, the local building authority decreed I must raise the house to modern standards. I was very worried it might alter the appearance of an historic building, and it meant building new steps for the front door. However, I solved the problem by covering the gap between the ground and the bottom of the house with lattice. The lattice was wooden and quite likely defeated the purpose of the higher stumps, however, since the house was made of cypress pine, a timber termites don't like, I wasn't too worried.

The idea of the capped stumps is that whilst the termites, which live underground, might take a fancy to the stumps themselves, they will be prevented from entering the building itself by the metal barrier of the overhanging cap. If they get in to your house they eat the wood from the inside out and can go undetected for quite a while.

Here in Indre et Loire, where there is a slight risk of termites in your house, a termite report must be obtained by the vendor and provided to the purchaser of a building. In Queensland, where a third of untreated houses are at risk, it is merely advised that a purchaser obtains a termite report and makes it a condition of the sale.