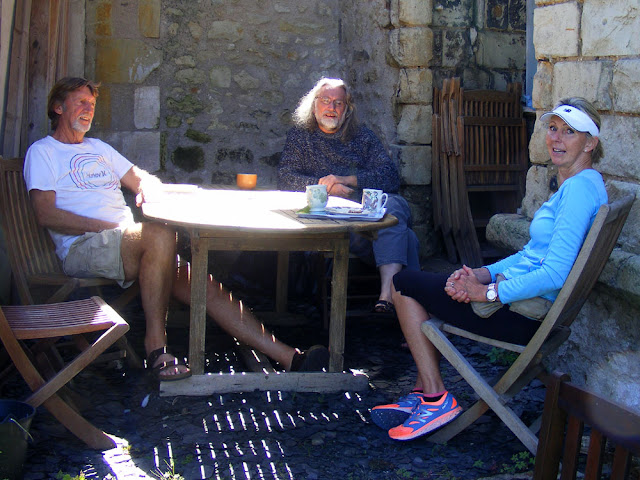 The other day I got an email from my friend Christine. She asked me if I'd encountered a South African couple called Jheanne and Joy in the street in Preuilly. She told me they had borrowed a house at the top of our street and were here for three months, with no car and no French. So at Christine's suggestion I made contact with them. A few days later they were passing and we were in the garden, so they stopped for a chat and a cup of tea. As Christine says, they are très sympa.

They aren't the only stray travellers we've been directed to recently. On 8 May at the ceremony for Victory in Europe Day there was a couple attending, standing diffidently at the back of the group around the War Memorial. I didn't recognise them, and neither did Gérard, the deputy mayor. He went over to introduce himself and discovered they were Australians called Christine and Geoff, travelling around France, who had seen the ceremony as they passed by chance and stopped. Christine spoke some French and was very interested in the World War II history of the area, especially the Resistance. She had been reading Robert Gildea's Fighters in the Shadows, and her own father had been in the Special Forces in Borneo. Gérard made sure we were introduced and we joined them for the vin d'honneur and talked about the war.

Fabulous to give visitors such a lovely welcome. Hope you are enjoying this beautiful weather x

A bit hot to be honest :-) We sweated our way through a wedding on Friday and I was out on the limestone slopes hunting for orchids yesterday. Today, I've been indoors doing the tax. Now I need a drink!