The Hôtel Gouin with a Calder sculpture in the courtyard. 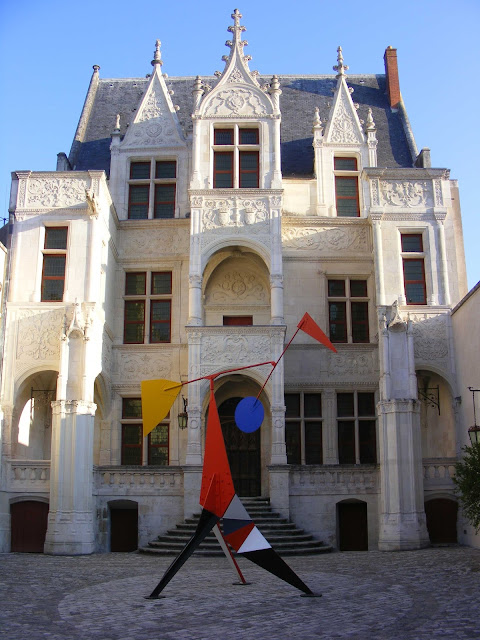 The Hôtel Goüin in Tours is not, and has never been, a hotel in the anglo sense. It was built as a grand private home in the 15th century, although what we see now is a 16th century remodelling. Later it served as the headquarters and archive storage for the Archaeological Society of the Touraine. In 1944 all but the facade was destroyed in a bombing raid and the building was partially rebuilt in the 1950s. Now it is a museum.

The sculpture currently in the courtyard is by Alexander Calder. He lived for much of his life in the Loire Valley, at Saché. This sculpture, one of his stabile-mobiles, is called 'Crinkly', from 1969 and made of steel, stainless steel and aluminium.

The American sculptor and painter Alexander Calder, 1898 - 1976, arrived in Paris in 1926. He created articulated toys, in wire. Jean Cocteau nicknamed him later 'the king of wire'. Calder was part of the avant-garde, with artists like Joan Miró, Fernand Léger, Man Ray, Le Corbusier, and especially, Pietr Mondrian, the pioneering abstract painter. Calder admired Mondrian's paintings and in 1930 declared 'I would like to make Mondrians which move'. From 1931, he was a member of the group 'Abstraction-Creation', which brought together Mondrian, Jean Arp and Robert Delaunay. In 1953, Calder set up his workshop in the Touraine, at Saché, on the banks of the Indre.

The work of Calder is marked by the search for movement, which is expressed in particular with his mobiles. These are light iron structures, suspended and articulated, composed of several horizontal bars carrying small coloured leaves which move in the wind.

A pioneer of kinetic sculptures, Calder combined mobiles and stabiles, creating standing sculptures topped with a mobile. His stabiles are monumental steel sculptures, destined for the centres of cities, to resonate with modern architecture. Calder first made models which were then tested in the breeze to check their robustness. These models were scaled up and erected by workers from a local boilermaking factory. The Biémont factory near Tours constructed most of these stabiles, painted in mat black, with details added at the request of Calder.

I'm very old fashioned and not keen on this sort of art, especially in an historical building :).

I suspect Calder himself might not have approved of this particular placement.