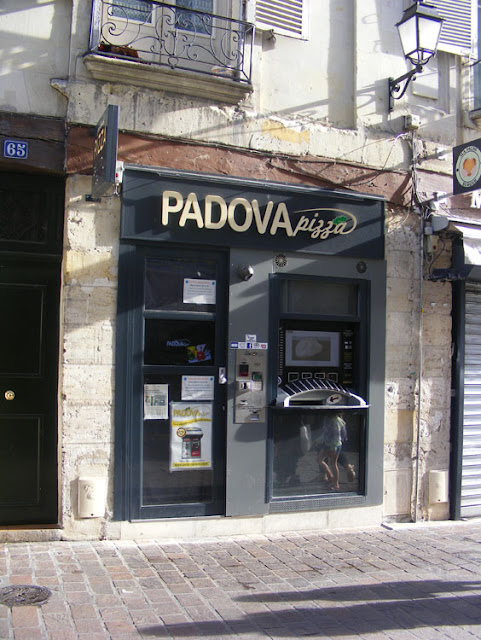 This place, in rue du Commerce in Tours, used to be a perfectly ordinary pizza takeaway restaurant. Now it is a vending machine. What is the world (or at least central France) coming to? I didn't look at it closely to see exactly how it works. Can one buy a pizza at any hour of the day or night I wonder? Rue du Commerce is in Vieux-Tours (ie the old medieval heart of the city of Tours, with lots of surviving medieval buildings). The residents include lots of students and it is where many tourists choose to stay. I imagine this pizza machine is probably well used and the owners are congratulating themselves on a smart business decision. I'm still dubious about the idea though, and not just on aesthetic grounds.


Simon has been busy, redesigning the website for Loire Valley Time Travel. He started at 9am on Sunday and with the exception of going to a picnic on Sunday afternoon worked through until 11pm on Monday, at which time it was "just about there".  Yesterday he slept until lunchtime, and then spent 10 hours testing to make sure it did what it was supposed to do, and (hopefully) correcting all the typos. Then he sent it live and spent another 3 hours testing it still worked in the wild.

The website is here: www.tourtheloire.com and theoretically will work properly no matter what computer or device you are using. It's called responsive design, and until Sunday he knew what the concept was - nothing more. He says if it doesn't work properly for you he would like to know, but that it might make him vewwy cwoss with technology.
Posted by Susan at 09:00

Email ThisBlogThis!Share to TwitterShare to FacebookShare to Pinterest
Labels: Food and Drink, Tours

Congratulations Simon! It works beautifully here in Paris on my iPad mini. Even the video around the chateau de Boussay is flawless. Good work!

I must add that I tried all the links and everything worked fine.

Great Job Simon. Works fine on our main computers (Windows 10) and on the Android tablet. My only comment is "how do I ring you if we live in the UK or Ireland or Russia?"

Works fine with Firefox, even on my legacy Windows XP, though I didn't test all the links. The comments form might be better a little less spaced out.

The site looks good on my laptop. My one question is about the phone number in North America on the FAQ page. It says:

I think (0860) will confuse people. In the US and Canada, I believe the number would be 1-860-484-7744, approximately as you have it on your main page. Maybe somebody who lives in North America can confirm.

It is a normal Connecticut number as far as the clients are concerned, although it comes through to us here in Preuilly.

Hi, French reader from Touraine here :-) Just to comment about the pizza vending machine (distributeur à pizzas). It works well, there's one in a nearby village (Cinq Mars la Pile, near Langeais) and we can buy either cooked or uncooked pizzas. They're made by a local pizzaiolo, so they're as good as any pizza from a pizza shop. We've also tested another one that sits on a pizza shop storefront (which really helped because they were closed on Mondays), and they were good too. (in Bourgueil)