Twice we have witnessed the immediate aftermath of a fire in an apartment in rue du Commerce in Tours.


A fire hose snakes down rue du Commerce in 2015, and a hydraulic platform is still visible opposite the burnt apartment at the end of the street. The blue fronted building on the right is the bookshop whose apartment burnt in 2017. 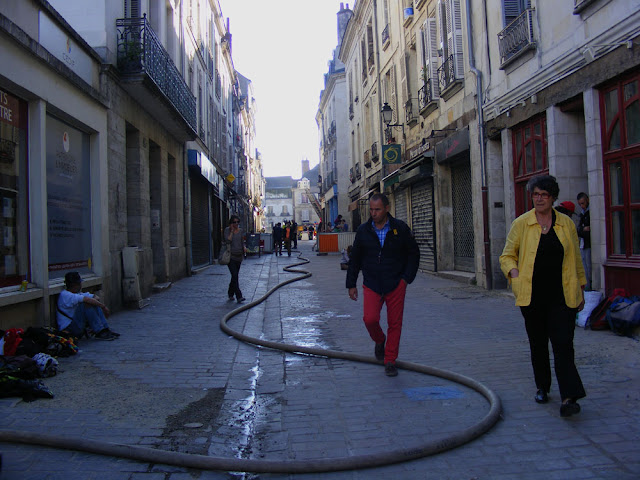 Back in May 2015, when my uncle Ric and his wife Sheila were visiting, we encountered the fire brigade just packing up after a fire in a building near the intersection of rue de la Lamproie. Then two years later almost to the day, we walked by to see the scorched windows of the first floor apartment above the science bookshop on the corner of rue Paul-Louis Courier being inspected by three men who may have been the insurance assessor and two tradesmen. But back up at the rue de la Lamproie end of the street, the painters were working on the property next door to the one that burnt in 2015, adding the finishing touches to a very nice restoration. The burnt out property has also clearly been restored.

Burnt out apartment over the bookshop in rue du Commerce. 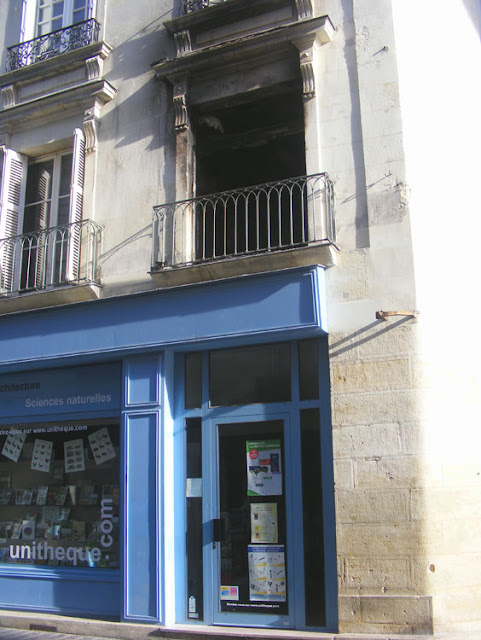 The 2015 fire was in an apartment and caused a gas bottle to explode. It happened at 6.15pm in the evening and three fire stations responded with two fire trucks and 30 firemen. The two level apartment on the first floor was completely destroyed but no one was hurt. A fireman was treated for shock after the gas bottle exploded. The fire was probably started accidentally.

The apartment which burnt in 2015 is in the building behind the object under a green tarpaulin. 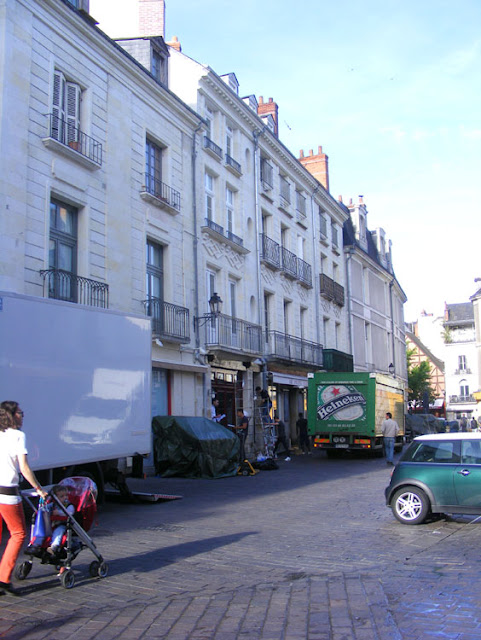 The more recent bookshop apartment fire was reported at 3pm on a Saturday afternoon. Rue du Commerce comes off Place Plumereau, the old centre of Tours, and the street was crowded. It took two fire trucks, 20 or so firemen and a dozen emergency services vehicles to deal with the fire. Two people, a 5 year old boy and his 69 year old grandmother, were taken to hospital with smoke inhalation. The fire started in the kitchen and the grandmother had been preparing something for her grandson to eat. The apartment was completely destroyed. Two of the occupants were out at the time of the fire, and all four have had to be rehoused. Two went to family, two were put up in a hotel by their insurer. The street was closed for two hours, so the shops along rue du Commerce no doubt lost some business. The whole building was evacuated while the fire was burning, but the neighbouring apartments were untouched. The bookshop below suffered water damage when a pipe burst.