As part of our bid to help save the Chapelle de Tous les Saints in Preuilly I organised a private visit with the architect for a group of interested anglophones. Several of them spoke good French, but I provided translation services for those who weren't so confident of their French and to clarify a couple of points.


Jean-Philippe Barthel, the architect, talking to the group about the chapel project. 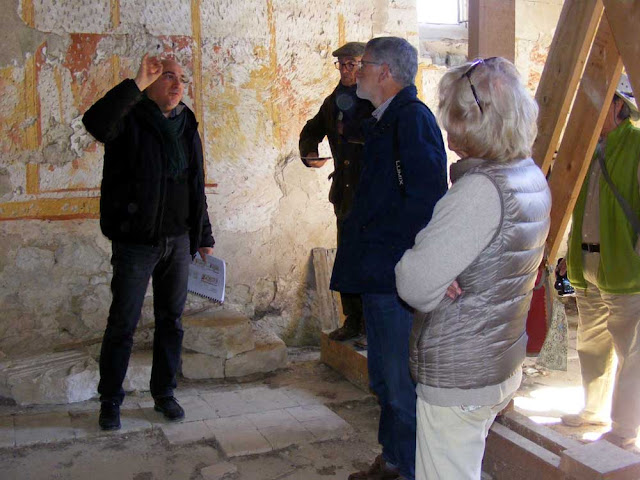 Jean-Philippe Barthel, the architect did a terrific job of explaining the project, both why it is important and how it will be done. (I've written about this here and here.)  I was really grateful to him for coming all the way from Blois to spend time with us. I invited him to lunch as a thank you, but unfortunately he had to get back to Blois. Bernard, who has done all the hard work in terms of obtaining funding and Dominique who made the excellent video about the chapel were also in attendance and able to add their knowledge of the project.

I was also really pleased that all those who attended were as intrigued and charmed by the chapel as we are. It is always a bit worrying showing a building in such a sorry state to others. Some people just see an unimpressive mess. But I needn't have worried. Everyone there understood how important the danse macabre is, and they were particularly taken by the painted ceiling.


A foliate motif on the ceiling.

Jean-Philippe told us that Sabine de Freitas, the wall paintings conservator who will co-ordinate much of the work, has confirmed that the ceiling and the wall paintings are contemporary. She says that the pigments and the design motifs are carried from one to the other in a way which indicates they were done by the same artists at the same time.

DRAC, the main funding agency, has insisted that the ceiling be conserved in situ, which means that an umbrella style scaffolding (the most expensive sort) will need to be constructed to protect the entire building while work proceeds on the roof. After the roof has been repaired the wall paintings will be cleaned by painting them with a water based gum that is then peeled off. It will take all the dust and surface accretions with it, kind of like a face mask. Then the missing bits of the painting will be filled in using a hatching technique. This allows the eye to make sense of the images whilst still making it clear what is original and what is modern restoration.

DRAC have also insisted that certain quirks of the building which have developed over time be retained, such as a bow in the wooden beam along the top of the northern wall. Sabine will be directing the work of the roofers and masons because everything revolves around and touches (both literally and figuratively) the wall paintings. She must ensure that the wall paintings and ceiling are protected while the roof is off and while the masons re-render the unpainted sections of wall.


The same foliate motif used on the walls.

I invited everyone back to lunch afterwards, but unfortunately Jean-Philippe had to get back to Blois, Dominique was off to a meeting with Marisol Touraine, the Health Minister, and Bernard also had other commitments. Most of the rest repared to our place and enjoyed quiche (thanks Tim and Pauline), jerk chicken (made by me) and stewed loganberries (thank you Rose).

I thought it was a very successful outreach exercise and now we have a few more people who know and love the chapel. Jean-Philippe hopes to conduct more visits whilst the work is going on, perhaps in the autumn. We are still about €20 000 short of being able to finish, but the tenders have been put out and artisans chosen to do the initial masonry, carpentry and roofing work.

If you want to donate you can still do so via the Fondation de Patrimoine page.