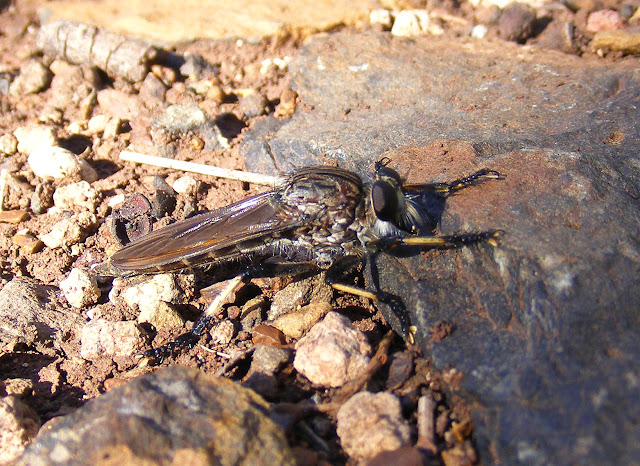 One of reasons I finally signed up for Facebook last December is because there are a number of very active entomology groups that use this medium. Within 24 hours of me having an account my friend Chris, a parasite fly expert who works at the London Museum of Natural History, had signed me up for about a dozen of the groups he thought I would find most useful. It was all a bit of a whirlwind and I was amazed at how much was being posted and by whom.

Just recently, Erica McAlister, the fabulous Curator of Diptera at the London Museum of Natural History announced on the British Soldier Flies and Their Allies group that 30 March was World Robber Fly Day. She asked that as many people as possible contribute a picture of a Robber Fly. So I chose this nice example from January 2014, photographed on a farm track very early in the morning, near my home town in south-east Queensland.

We don't know what the species is, but it looks like one in the Asilinae sub-family. Like Erica I'm a big fan of Robber Flies Asilidae. They are ferociously efficient hunters with a far higher success rate than vertebrate predators.