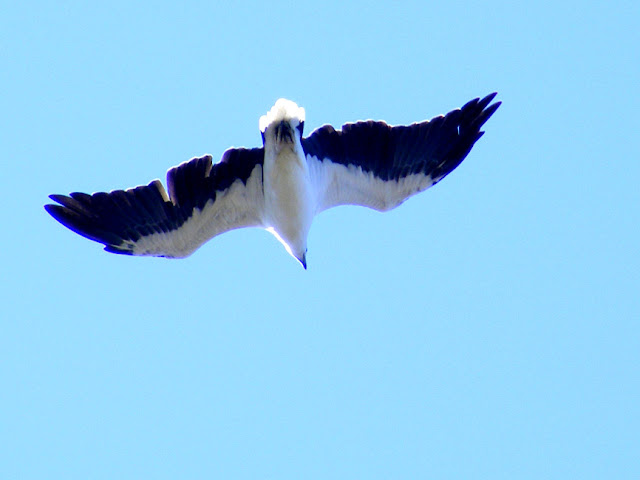 The White-bellied Sea Eagle Haliaeetus leucogaster is a big distinctive white, black and grey bird. This one is a mature adult ie at least 5 or 6 years old, and they can live to 30. The wingspan is 2 metres and the 3 kg birds measure about 80 cm long. Never abundant, but they can be easily seen around the coast of Australia. They are also present on major inland waterways. Mostly they eat fish, which they catch by plucking them out of the water on the wing, but they won't turn down carrion of any sort if it presents itself. They will also eat turtles, snakes and water birds, and harass other birds for their catch. Apparently they are capable of taking a swan, but it has to be said that Australian Black Swans are smaller than the Northern Hemisphere species.

I see that their call is described as a loud goose-like honking. I have to admit, it had never occurred to me that it was goose-like, but it certainly is loud and they are quite vocal birds, especially in the mornings and when couples greet one another. Unfortunately nesting couples are easily disturbed by human activity, but if left alone a nest can be occupied by the same couple for decades.

They can share territory with Wedge-tailed Eagles (the Australian equivalent of the Bald or Golden Eagle) because they go for different prey. The two species don't seem to interact much, although there might be competition for good nesting trees. The wedgies will hunt over dry land and the white bellies over water.

Their numbers seem to be declining as they lose habitat and coastal land is urbanised. However, this may be offset as the inland population do well thanks to the otherwise unwelcome introduction of European Carp to Australian fresh water bodies.

This one was photographed cruising overhead in a National Park on the New South Wales coast.

Our posts on Sundays have an Australian theme. If you would like to read more, click here.

Taken last year in Tassie. Also got a shot of it taking steak from the water thrown by us to tempt it... Magnificent bird.

Blimey! You were feeling flush -- feeding the wildlife on steak!

It was what we were using as bait for fishing, so it was probably past its best...

Lovely looking raptor...
especially like Colin's action shot.
About ten years back, now...
Pauline and I were at one of the RSPB reserves, in Yorkshire, at this time of the year...
and a pair of "wild" Australian Black Swans swam past... complete with five cygnets....
initially we were rather surprised and then thought...
of course, it is quite natural...
it was comming up for their mid-Summer!!

Ah, that explains it. The sea eagle probably appreciated the extra ripeness.

Black Swans breeding in the autumn does make you wonder what triggers their hormones though -- it can't have been rising temperatures or increasing day length. Maybe it was rain or something. Quite a few Australian species will flower or breed in response to rain no matter what time of year.

It was actually below freezing on the day we saw them... we'd gone specifically to purchase something from the shop... and see the Tree Sparrows.
But the cygnets were around half adult size, so I would guess that they started breeding at the start of the Autumn.... but who knows what actually triggers these responses... we have wallflowers flowering!

I checked. They breed in response to rain. They are a mainly southern species so that means they breed in the winter.