Biodiversity Surveying Along the LGV

A while ago I received an invitation to accompany the botanist François Botté to survey an area of land under reclamation after work on the high speed train line (Ligne Grande Vitesse or LGV) from Tours to Bordeaux had been done. So on 5 July I took myself off to Sepmes to be at the church there at the appointed time.


Grass-poly Lythrum hyssopifolia (Fr. Lythrum à feuilles d'hysope)
- a plant I had never heard of, much less seen before. 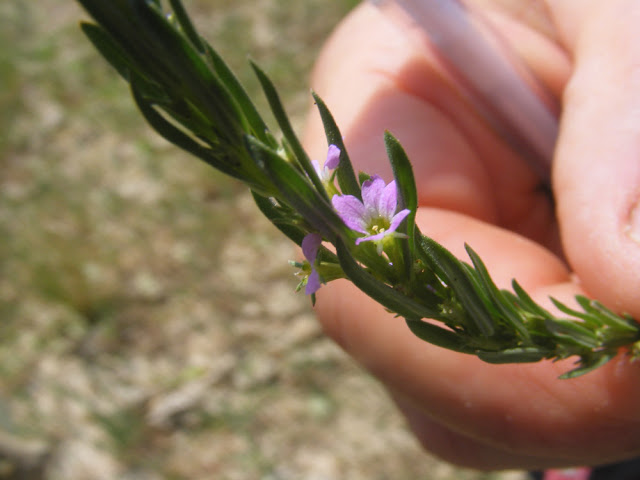 When François turned up he greeted me and another bloke who was lurking about. François and I know each other well enough to cheek kiss (faire la bise) on meeting but the stranger and I shook hands when it was clear he was joining us. He neither introduced himself, nor did François tell me who he was (this is a not uncommon occurance in France). I never caught the other man's name, but that's not a problem because addressing someone as Monsieur is fine.


Hairy Buttercup Ranunculus sardous, an unusual species related to the more ubiquitous buttercups that everyone here has in their lawn. 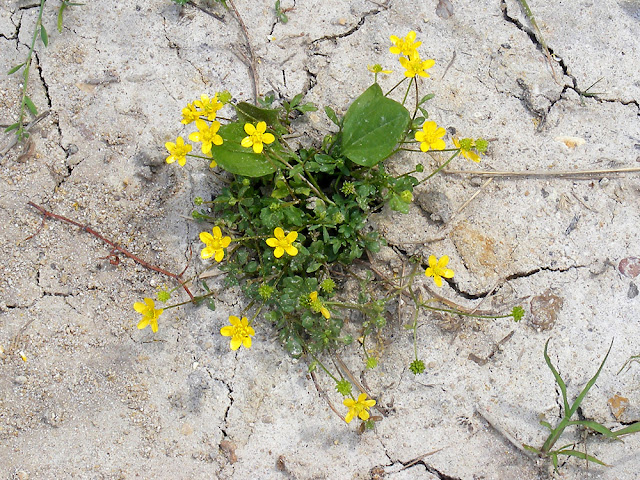 I was wearing sandals and François looked at my feet and asked if I had any boots. No? Oh well, I would have to wear his spare pair, which he fortunately had in the back of the car. I pointed out that he hadn't mentioned before that I would need rubber boots, so I hadn't thought to bring any. The boots were size 42 (I'm size 39) so they weren't too inconveniently large. Then he directed me to sit in the front of his car and the other bloke to sit in the back, on a quite substantial pile of hay. He explained that it wasn't for rabbits, it was because he was collecting specimens of different grasses for a display board and his wife refused to allow him to dry them in the house, therefore they lived in the car.


Looking into the path of the LGV through the barrier fence. 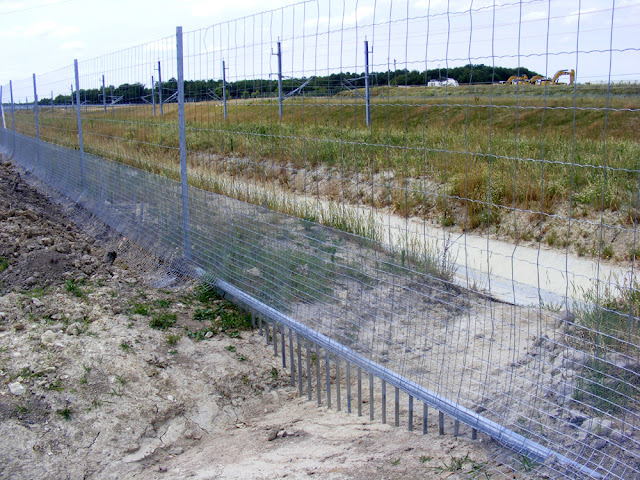 The site we were to survey was just outside of town, behind a ramshackle farmhouse. The actual process of surveying was a matter of trying to keep up with François, who had the advantage of being a) already familiar with the site, and b) a fearsomely good botanist. Mystery Monsieur and I trailed behind frantically taking notes and photos and occasionally proudly pointing out something that we recognised or something François hadn't spotted.

The land has been compulsorily purchased from the farmer because the path of the train line ploughed straight through a couple of small ponds which were the breeding grounds of some protected amphibians (frogs and newts). The ponds have been recreated and an area of grassland and a small wood act as a buffer zone and additional habitat for different stages of the amphibians' life cycle. The Conservatoire du Patrimoine Naturel has been engaged to monitor the site for the next 50 years and so our survey of plants and dragonfly species was part of their regular monitoring of the site. François is also in charge of maintaining the site so that the grassy areas do not scrub over with sallow. He is going to organise the farmer to periodically slash the sallow, which will just be left on site. He says it's important to use a technique that doesn't turn the sallow into chips. He doesn't want mulch, he wants brash.


François surveying one of the ponds. 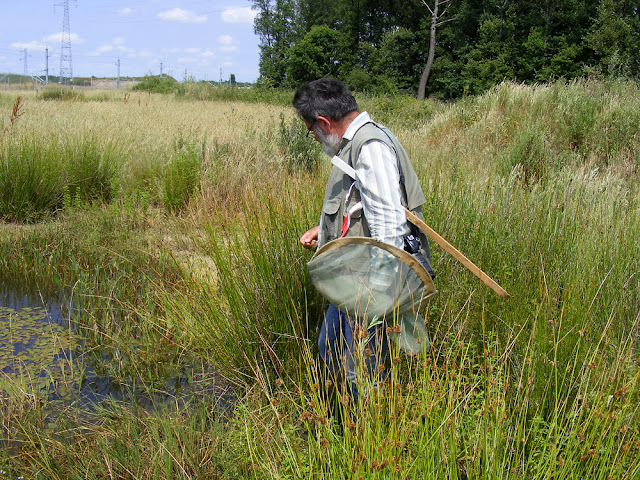 The recreated ponds are now 5 years old and doing very nicely. The level of vegetation is satisfactory, as is the colonisation by dragonfly and damselfly species. The frogs, including Tree Frog Hyla arborea, have relocated well. We didn't check for newts, but I assume the newt people are happy with their progress too. There seemed to be a remarkable number of noteworthy plants on the site, as well as many more common chalk specialists that I have come to know and love.


One of the recreated ponds with the train line in the background. 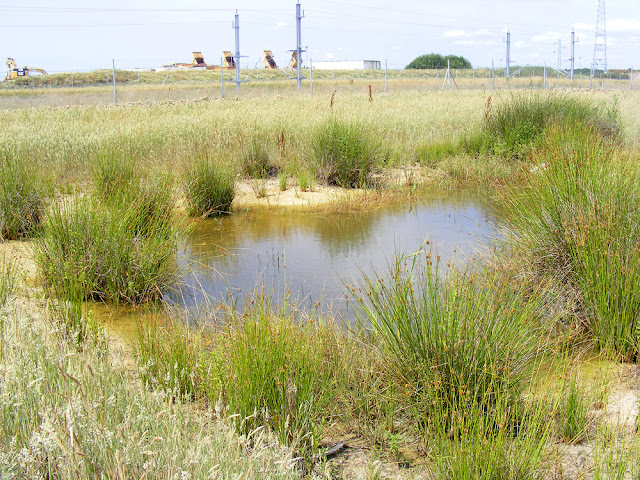 These little pools, which appear quite natural, are referred to by François as mares. I thought it would be a good opportunity to ask what the difference between a mare and an étang was. As I expected, François had the technicalities at his fingertips, and more.

So here's the lowdown:
Mare: small and shallow (no deeper than a metre), with no exit. Can be natural or man-made. The English equivalent is pond or pool (includes rock pools).
Etang: deeper, with a dyke and a drain or sluice at one end. Always man-made. The English equivalent is man-made pond (often a fishpond).
Lac: a lake is a body of water which is deep enough that below 2m is a constant 12°C. The surface water is warmer than the deep water in the summer and colder in the winter.
Mardelle: a pond formed by the action of the expansion and contraction of ice, sometimes by the dissolution of a limestone layer, sometimes by ice being blown across the limestone layer, always on an impervious clay base layer.
Doline or aven: formed in karst limestone, a sinkhole. These can be of any diameter or depth from less than a metre to many metres.
Marigot: a stagnant or even saline pond such as oxbow lakes, isolated pools in a partially dry river or a pool in a marsh, often filling and drying up seasonally. The Australian equivalent is a billabong.

We didn't lose power, although we had one or two brownouts. According to La Nouvelle République 9000 foyers (best translated as establishments in this context) in Indre et Loire lost power, including a number of places in Loches.

Wow! Get that man onto wikipedia. I'm glad to learn the exact definitions of these terms. Not that I'll remember all this, but now I know that if I need the info I can look it up here, at your full-service blog.

"scrub over with sallow" and "brash". I'm guessing that brash is like big pieces of mulch? But what is sallow?

I am utterly impressed that the government plans to monitor those sites for the next 50 years. In some places, ahem, they'd just pave over everything.

Brash is small twiggy branches and stems. Sallow is a type of willow.

He might be dangerous on Wikipedia. I've never had an email from him that was shorter than several thousand words.