We have posted photos of Moths before...


This venerable lady flew over Preuilly sur Claise at lunchtime on Monday. She wasn't all that high up, but I didn't have a chance to set up the camera: I just picked it up and blasted off a shot before the plane meandered off out of sight. As you can tell by the fact the propeller doesn't appear to be spinning, I had apparently been photographing something in extremely bright light last time I used the camera (high shutter speed). It also appears from the extra grain that the camera is set on quite a high ISO for low light. With that kind of confusion in my head, I am kind of surprised that I even managed to get the plane in the frame. 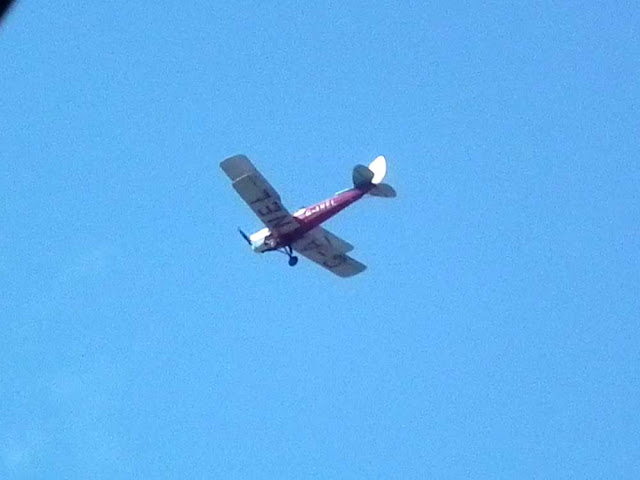 Yes, I know it's kind of sad that I was inside the house and still recognised an unusual aircraft engine note, but I think it has to do with having good (and quite musical) ears. I even managed to identify the type of plane before taking the photo. I'm a boy. Boys can do that sort of thing.

On Saturday a much better photo was taken of this plane at Woburn Abbey, in England. Not bad going for a machine made in 1939 as an Air Force training aircraft.

If anyone has any 1975 or before deckchairs or camping chairs, camping table or beach umbrella, that they are willing to lend us or sell for a small price, drop us a line? We're wanting to accessorise for retro picnicking. If you have a tent from 1965 I am even more interested!
Posted by Simon at 09:00

Like 2CVs, TAs, 4Ls....
old Triumphs... real Minis....
this elderly lady is simple, non-computerised....
probably over-engineered...
and, looked after, has the potential to just...
Keep On Truckin'