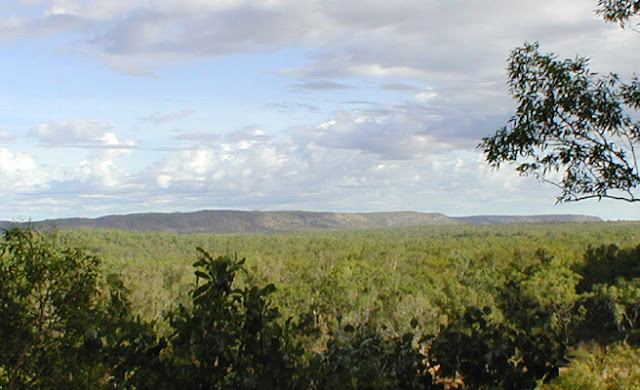 Somewhere down in all those trees is a large river. Three weeks before this photo was taken the river flooded and rose 19 metres, causing a state of emergency to be declared by the Northern Territory government. The river and the spectacular gorge it has created form an important tourist attraction in this isolated area. The Northern Territory Tourist Office bill it, with considerable justification, as 'where the outback meets the tropics'. Aboriginal culture and heritage, outdoor activities, especially kayaking, and wildlife watching feature heavily on the agenda if you visit this area.

Also on the list of things that needed using was half a punnet of tiny teardrop shaped tomatoes from one of our local producers. I decided to tweak Jean's recipe for stuffed zucchini, and made smoked salmon and blue cheese stuffed zucchini. The zukes turned out well, even Simon voted them OK (although he was careful not to sound too encouraging in case I am tempted to make stuffed zucchini again...). If I do make something like this again I will use tuna. Smoked salmon is wasted in this with the blue cheese.

Also taking up a great deal of space in the pantry are trays of apples. You'd never know I'd picked any if you look at the trees in the orchard, but I have hundreds of apples in the pantry. So yesterday I made two big spiced apple and rhubarb crumbles and boiled up a ten litre pot of apples for jelly. They are currently sitting in the jelly bag to extract the liquid.
Posted by Susan at 09:00