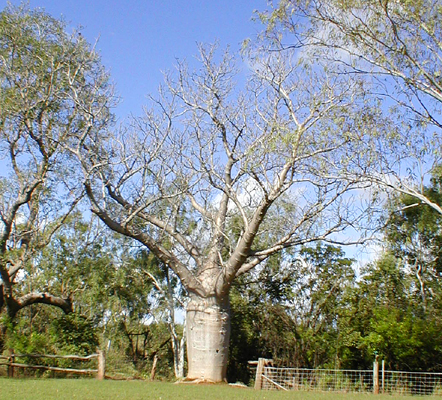 The name Boab is probably a contraction of Baobab, the name by which the species Madagascan cousins are known. There are only 9 species in the Baobab family, most of which are native to Madagascar, a couple in Africa and the Arabian Peninsula and this one in Australia. The peculiar global distribution is thought to be because seeds from Madagascar floated across the Indian Ocean and established the colonies elsewhere. Over time these trees on separate continents have speciated. The generic name honors French botanist Michel Adanson, who described the species from Senegal.

They grow in family groups from seed in the wild, but farmers often bulldozed them for agricultural land. Old and impressively bottle shaped ones have more chance of being saved as specimens even on agricultural land, where farmers will sometimes be willing to work around them. They grow very slowly, so the population is declining because the trees cannot reproduce and grow to maturity at a rate fast enough to cancel out those which are being bulldozed.

The trees grow in seasonally arid areas and are deciduous, losing their leaves in the dry. The enlarged trunk is a water storage system and Aboriginals used them as a source of water in the desert. The flesh of the nuts was also eaten.