Recently someone arrived at the blog by using the search string 'large flying beetles in France'. I hope they found what they were looking for and identified their visitor, but it prompted me to write a blog post especially for them and their ilk.

I'm not surprised someone in France was trying to identify a big beetle this year. It's been a good year for them. All this warmth suits big beetles nicely.

The beetle might have been a Cockchafer Melolontha melolontha but I think many people know what they are and wouldn't have to look them up. Plus they are not quite big enough to be really impressive. Other candidates are the really big longhorn beetles, such as this one in the next valley, but they are rather rare, so you would have to be very lucky to see one.


A female Stag Beetle, encountered sitting on a sunflower leaf at the edge of a small wood. 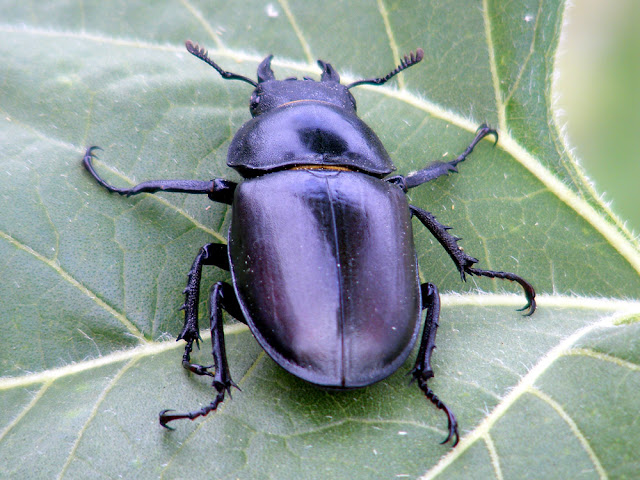 In my opinion the two most likely candidates this year have been European Stag Beetle Lucanus cervus (always a good bet for 'large flying beetle in France' questions) and Rhinoceros Beetle Oryctes nasicornus. I've spotted female Stag Beetles going about their business several times this summer, including photographing one at Tim and Pauline's that appeared to be laying eggs behind the bark of an old willow in their park. They have a known breeding population and have written about their experiences on their excellent blog Aigronne Valley Wildlife.


A male Rhinonceros Beetle, found dead in the street in Preuilly. 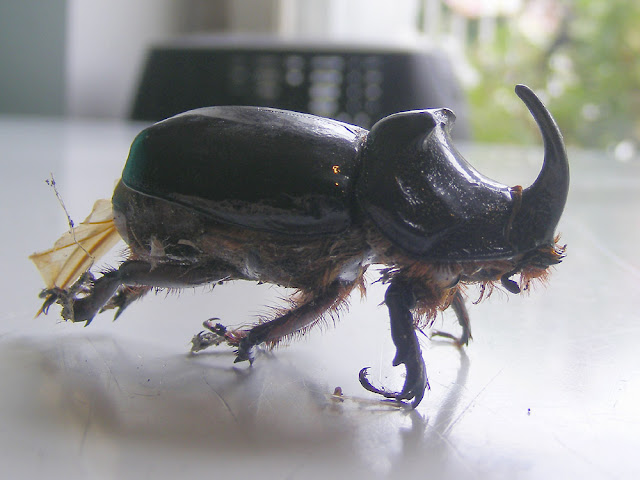 I've never seen a live Rhino Beetle, but I have found several this year that have been hit by cars and fallen dead in the street. The last one was a magnificent male I found outside the primary school when on my way to the swimming pool. I picked him up to show everyone at the pool and he was a tremendous hit. Several people photographed him, nobody thought it was weird that I picked him up and brought him along and no one indulged in melodramatic squealing repulsion. It's always pleasing when people are positive about insects and entomology.

*******************************************
A la cuisine hier: The tricky business of blending this year's Sour Cherry Liqueur. It's been festering away in a glass jar on the kitchen bench for some weeks. Once a week the resulting liquid is drained off and put aside. Once no more liquid can be extracted from the cherries each week's contribution is assessed and carefully blended. This year the brew seems to have been rather sweet and syrupy, making it instantly drinkable, but not necessarily very complex. Over the next few months it should develop a bit more character though. The base alcohol this year is some eau de vie des prunes, which I was given by a friend of the distiller's.

Thank you for the mention and link!
I have, in front of me as I type, a female Stag Beetle in a pot...
found her crawling across the floor yesterday evening...
in fact, she almost became an ex-beetle...
a very flat ex-beetle!!

In a few minutes, I shall be taking her down to the old willow...
whereupon I will probably hear Stag Beetle for....
"Oh, for gawds' sake... I left here last night!!
Or something very similar....?

Whilst trying to find a perch last night for Olly, I noticed a neatly drilled hole in another chunk...
lumps of sawdust all around and a big black bomber hovering nearby...
I shall go and take some pictures after I've released the Stagess.
May see you around at the Strumph sale....
but we collect Workawayer number four this afternoon and have a few things that need doing first!!
But there is always Paulmy tomorrow...
and there's bound to be stuff there that was at Prooly today....
and will be at Chaumussay at the end of the month...
and then re-appear next year at a brocante nearby!

On the liqueur front, we've learnt over the years to add only two serving-spoons[#] of sugar initially...
you can always add more later.
[#That's for a 1.5 litre LeParfait jar.]
T

That Rhino beetle is a very handsome fellow.

We have seen a number of Rhinoceros beetles this year, first time I have seen them, we get the huge Longhorn beetles every year, some of their larvae feeding on the not yet rotten Oaks around here.