On Friday afternoon my friend Antoinette rang me to say she had picked up an injured Barn Owl Tyto alba on the side of the road near Chaumussay. Neither she nor I are birders, but fortunately our friends Tim and Pauline are, so they agreed to house the animal until we could report it to the appropriate authorities and get it cared for.

Wild Barn Owls are protected in France and it is an offence to keep them in captivity. People do keep Barn Owls, but they must be captive bred, be registered with the authorities and be fitted with a leg ring that clearly indicates their captive status.

The owl Antoinette picked up appears to have been a wild specimen that had been illegally kept in captivity but presumably escaped. It seemed to be habituated to humans in that it didn't hiss when handled or approached. Shockingly, when Tim came to examine it a bit more closely, he discovered that it had been pinioned.

Twine embedded in the owl's leg. 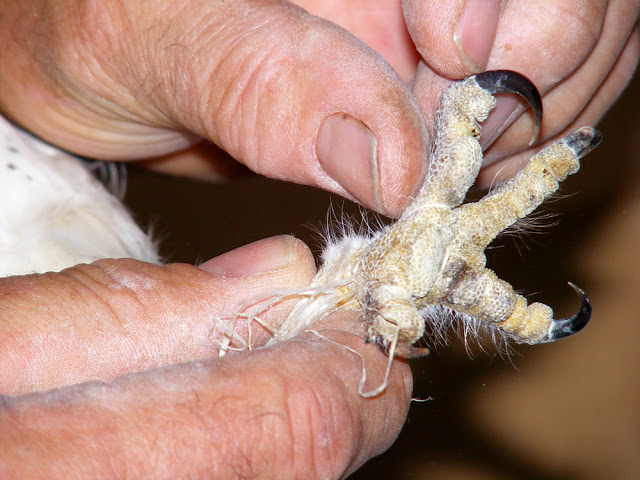 Pinioning is an old fashioned technique used to prevent waterfowl from flying. It involves chopping through the wing joint, and leaves the bird with half a wing. It is a barbaric practice. The bird also had an injury to the foot because of some plastic twine around the leg. This was an old injury that had caused a loss of circulation, swelling of the leg and the stunting of one of the rear toes. Its tail feathers were tattered, the result of being dragged along the ground as it walked.

Pauline rang Sauve qui Plume, a wildlife rescue organisation she knew of, but their answerphone message was unintelligible with background bird noise, a mumbling speaker and a staticky line. Antoinette tried later and got through to them. They requested that the bird be brought up to them at their base north of Tours on Saturday morning. Tim and Pauline were busy so Antoinette and I volunteered to do it.

Sadly, when Antoinette arrived to pick the bird up it had died. Tim weighed it and found that it was very underweight, by at least 100 g, which in a bird is significant (about a third of its expected body weight). Antoinette rang Sauve qui Plume again to let them know we would be delivering a dead bird, not a live one.

The hacked wing with exposed bone and what we think is tendon. 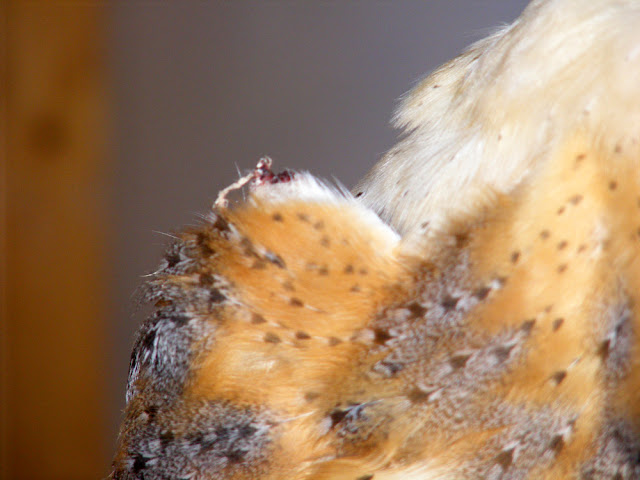 When we got up there it was lunchtime. We rang the bell and after a few minutes a man emerged. I recognised him as Yves Sionneau from the website. He took the owl and examined it. We got the impression he had never seen anything quite like this before. He commented that normally wing injuries that involve the loss of part of the wing are the result of getting tangled in wires, but this was clearly not the cause of this bird's injury. He also commented on how thin the bird was. It presumably had been unable to catch anything to eat for some days.

Pauline had seen an article about a similar case in California some years ago. She had also read that sometimes Barn Owls would be kept tethered in barns and used as rodent control. Yves had never heard of this and said that a pinioned owl wouldn't be able to hunt. That was what I thought too, but Tim thought they might be able to scurry about quickly enough to get the odd mouse. I also thought that a pinioned bird would have a high chance of being killed by predator like a marten or a fox. It didn't seem like the most intelligent approach to rodent control, especially given the easy availability of cats in this area.

Antoinette filled out a report and it and the corpse will be passed on to the Office National de la Chasse et de la Faune Sauvage (National Office for Hunting and Wildlife), who are responsible for administering wildlife crime in France. They will examine the body and produce their own report. The police will be notified, but there is no chance of ever finding out who committed the crime.

The sign at the entrance to Sauve qui Plume. 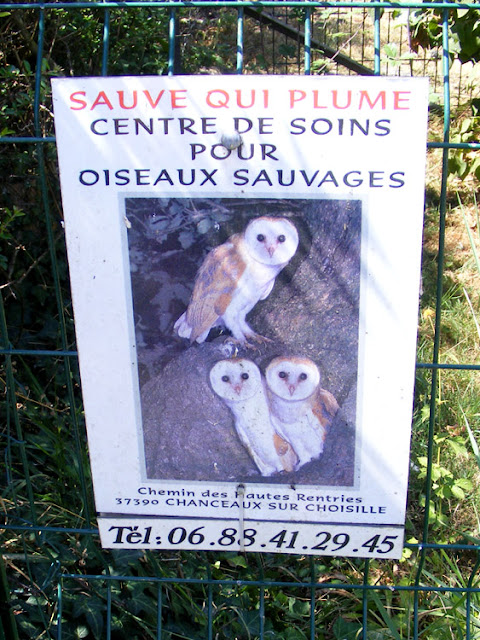 Yves was fairly matter of fact about the whole thing. I guess he's seen worse, and it's disheartening being handed a case that you can't really do much about. We made donations to Sauve qui Plume and went on our way.

If you are interested in the work done by Sauve qui Plume they are currently seeking a volunteer. Recently they released a number of young hand reared Kestrels and Buzzards into the skies around Villandry. They are really the only organisation in our area who are caring for injured wildlife, so well worth supporting.

The office at Sauve qui Plume. 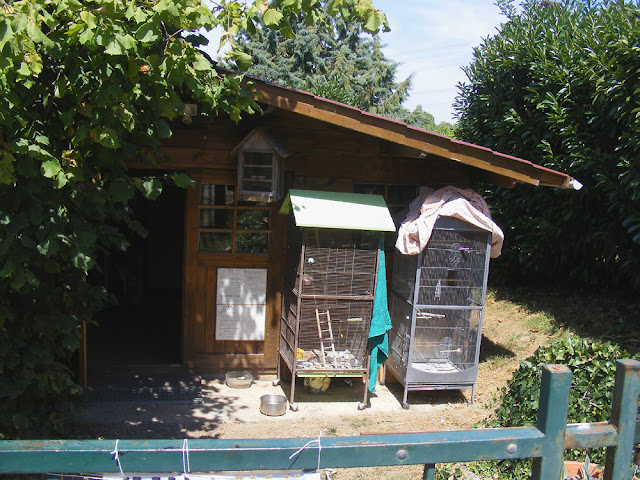 For information on what to do if you find an injured bird or mammal in France, Chris Luck's website gives you the basics.

Email ThisBlogThis!Share to TwitterShare to FacebookShare to Pinterest
Labels: Chaumussay, nature and wildlife

Thank you for posting this, Susan...
I was finding it difficult to get started...
I still feel somewhat sick when I think about it
It could well be tendon... but biology doesn't explain why it is in such a tight loop...
and why, when I photographed it using the microscope function on the camera, it appeared to be woven...
the central core looked like nylon rope.
Also' there is another way of pinioning, and that is to tie the two parts of the wing together tightly...
and I am wondering now if that is what might have been done to this poor bird..
The injury to the wing, although red, is old...
the forepart of the wing would have died through loss of circulation....
rather like docking a lamb's tail with a rubber grommet....
and may well have been "worried" at by the owl...
the forepart eventually falling off.
And the bird may well have been caged for long periods...
it could climb the side of Baron's big transport cage without being fazed by it...
and it didn't seem put out by being there...
in fact, it was perched quite happily on the log I put in.
To find it dead was really upsetting...
it was quite alert when I put the half-a-vole in...
and it ate it... I also found [and have put aside] the pellet it had ejected...
a tiny pellet... smaller than a kestrel's.

That poor bird was taken as a fledgeling...
the undeveloped toe that had been "strangled" by the twine...
shows the age at which it was taken...
and the saddest thing of all...
given the dire state of Barn Owls as a breeding bird...
it was a female!!

And Pauline was wondering if it's sudden appearance in the landscape might be what she calls...
The Cecil Effect...
someone else knew about it...
and took it on themselves to release her after reading/hearing about Cecil the lion!

I think it'd been kept as a pet. The grainstore business is out of TIm's memory, not mine. There are a couple of literary quotes for "pinioned owl" as well. Poor little devil.
Could it have been saved if we'd taken it to Sauve qui Plume on Friday evening? Maybe a specialist in avian nutrition might have done it, but then would it have been put down anyway? I wish we weren't 80km away on the wrong side of the Tours Agglo. Our other possibility was Vierzon - even farther. None of us felt up to a 160km round trip on Friday evening after yet another exhausting hot sticky day. I think we may have to set up our own branch, seeing as people continue to bring us things.

No! It is a 36/24 day and a 500 day year caring for such animals...
if we were 30 years younger and had the language and contacts.
Such organizations have to rely on volunteers...
the French word "benevole" is a far better description...
and if they aren't forthcoming from the local area, they are often too tired to work properly on arrival...
a number of animal rescue charities in the UK have found this.
If as much effort was spent looking after wildlife as was expended on capturing and re-homing pussycats....
and finding homes for kittens that shouldn't have been born in the first place...
it might be a different kettle of fish.
At least the re-homed ones have been neutered in the process...
Pauline and I have always thought that RonRon would make a wonderful mother...
and kittens from Baron would be magnifique.....
but it would have just been selfishness on our part that allowed that!