Ever since we moved to Preuilly we've been hearing tales of the extensive system of tunnels under the town. Many of these stories are from perfectly credible sources -- professionals and people who have lived here all their lives. One of our neighbours has trouble growing fruit trees because their roots descend into a void under his garden. One of the Bâtiment de France architects told us he had been in the system that links the house of another neighbour to the chateau only a few days before he came to see our barn.


The entrance to the caves under rue des Pavillons in Preuilly, with carefully vaulted walls and ceiling and sloping compacted dirt floor. 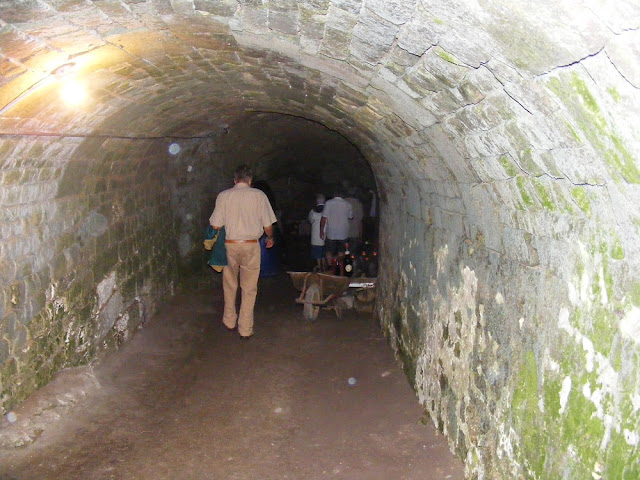 I've certainly been in several impressive medieval cellars under houses in Preuilly. Indeed, the very first house we looked at in Preuilly, and nearly bought, had a 12th century cellar. I've also been through the mushroom cultivation caves at Bourré many times, including going 'off piste' with Dorianne, their in-house guide, and down the subterranean refuge under the chateau of La Celle Guenand. But until recently I hadn't been underground in any of the galleries of caves that extend under multiple houses for a considerable distance in Preuilly.


Not far from the entrance is a pile of rubbish. Once abandoned as places of work these caves were an easy repository of household junk and debris. 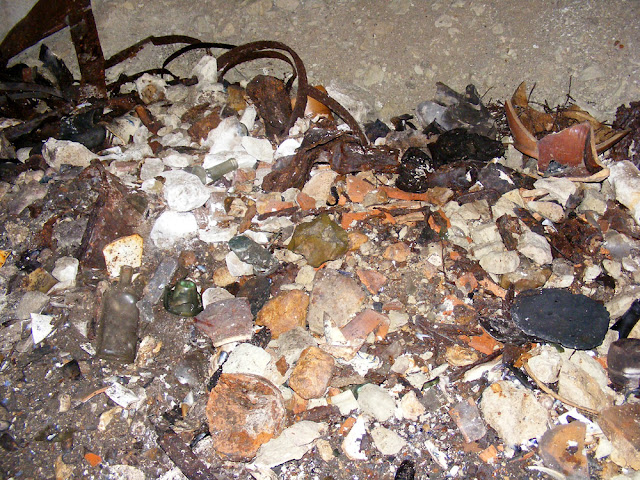 The local history association (Société Archaeologique de Preuilly) organised a nocturnal walk in mid-July, the highlight of which for me was going underneath rue des Pavillons into an abandoned limestone quarry. The tunnels extend under at least a dozen houses. The occupants of several of the houses above were on the walk and there were lots of jokes about just popping up into their kitchen for a cuppa and such like.


Duck!
These galleries were made by people who were generally shorter than us. 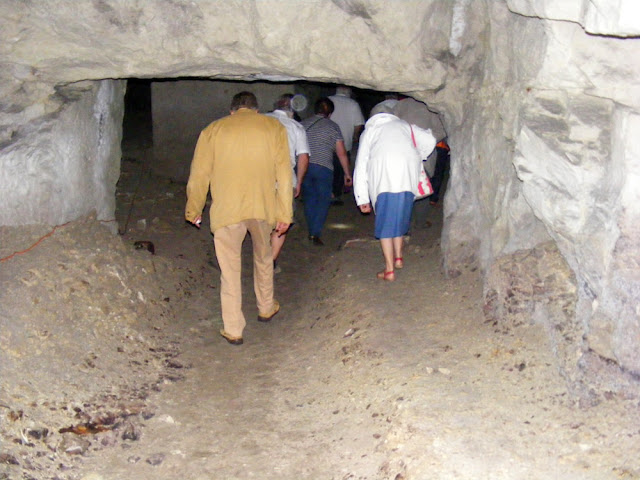 The French word cave (pronounced 'kahv') does not mean 'cave', by the way. Caves are man-made, usually (but not always) underground abandoned quarries, often repurposed for activities as varied as cultivating silkworms, mushrooms, endives, or making and storing wine. There is no good general purpose English equivalent of cave, but the word is often translated as 'cellar'. The French word for 'cave' is caverne.


The group on the nocturnal walk gather around to hear about the caves. 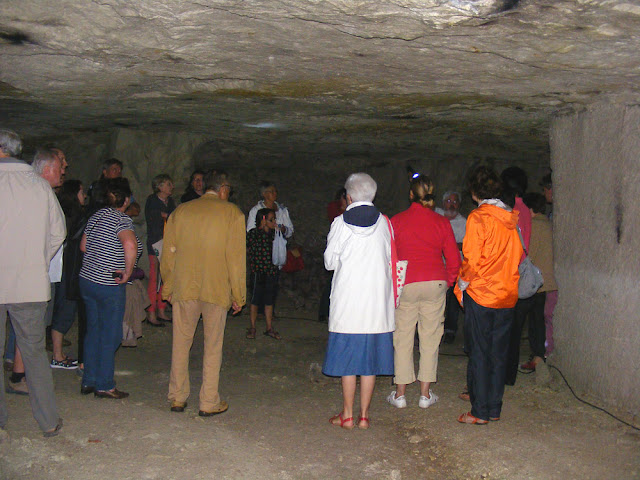 A view down the cave. On the ceiling are black soot marks from the quarrymen's candles. In the background is a pile of rubble from a rockfall and ceiling collapse. 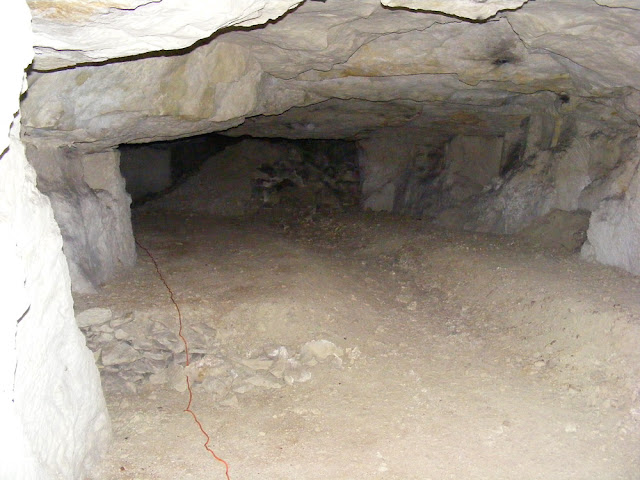 Jean-Claude holds up a map of the cave system and indicates
we are standing at the red asterisk. 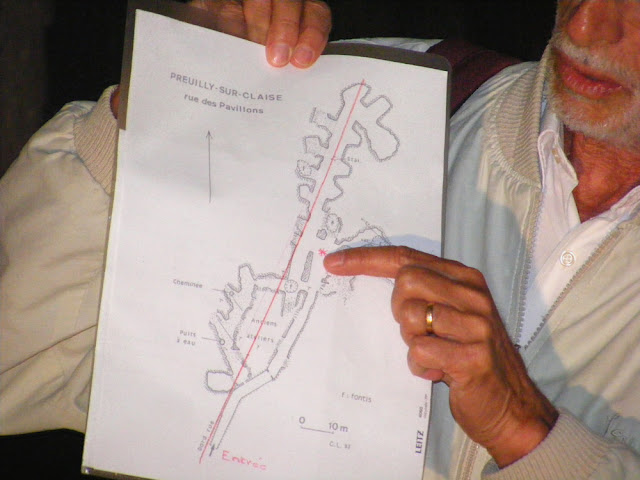 A view of some side galleries, with a rock fall.
Some of the smaller side galleries are for neatly containing piles of quarrying rubble, but rockfalls can be identified by the way they spill out into the main tunnel. 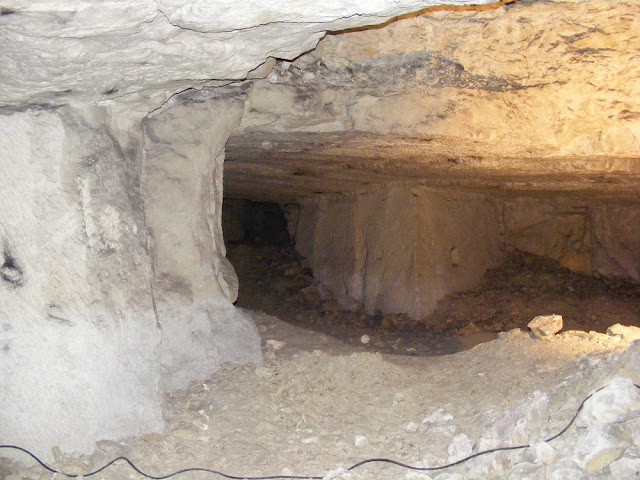 I think one word for Fr. 'cave' is tunnel, but then there are 'caves' that aren't long at all -- those are the cellars.

I think, in this particular case, the right word to use would be souterrains, meaning passages souterrains.

As for caves, one word would be cavernes, as Susan says, but if you're talking about Lascaux or Chauvet then the right word is grottes.

That's exactly it -- no single English word covers the number of meanings that the French cave does.

I forgot about grotte but for me that implies a beautiful underground place, either manmade or natural. English occasionally borrows the word in the form of 'grotto'. These in the blog post are not grottoes, although intriguing in their own right.

I recall that at Thouars the system was referred to as les souterrains...we found a cellar under a house we had there with a blocked access to goodness only knows what else: a neighbour showed us where he had filled in a passage under his property as whatever it connected to had been used as part of a sewer system for years by the council and he had had an interminable barney with them about his rights - involving the Edict of Moulins 1566 - as part of what he had blocked was under the road in front of his house.