By Train to Milan

We went almost all the way from Preuilly sur Claise to Milan by train - the only exception being that we drove from home to Saint Pierre des Corps, parked the car in our garage, and caught the slow train to Paris there.

We have caught the slow train to Paris Austerlitz before, and have always maintained that it's the slow train because it doesn't travel much faster than 100mph. Using my GPS I was able to discover that we have been wrong all along, and we will have to call it the "slightly less fast train" because it does actually hit 200km/h in places. No way is that slow... 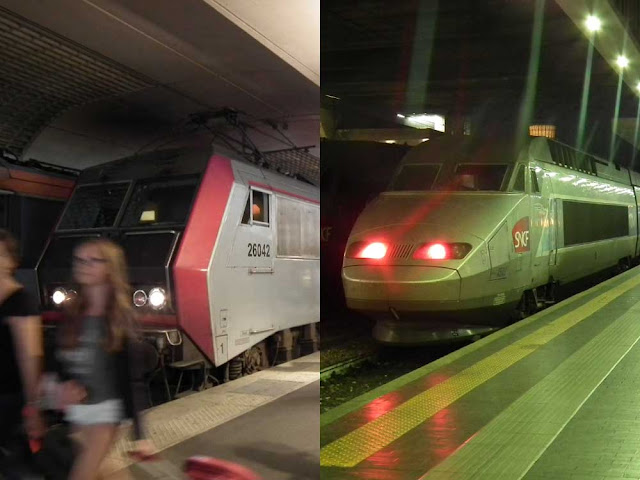 From Paris Austerlitz we walked to Gare de Lyon, a short 10 minute wander across a bridge built for that purpose, and caught the 14.41 TGV direct to Milan. Because we booked early we had afforded ourselves the luxury of first class tickets (cheaper than second class on the earlier train...), settled down in the relative cool and silence, and spot on time the train left. We travelled via Lyon St Exupery, Chambéry-Challes-Eaux, St-Jean-de-Maurienne, Modane, Bardonecchia-Stazione, Oulx, Torino Porta Susa, Rho-Fiera Milano, and arrived at Milano-Porta-Garibaldi exactly on time. Being first class tickets we had trolley service for drinks and snacks, and a couple of hours before arriving in Milan orders for our evening meal were taken at our seats and delivered there as well.


A screenshot of the geolocation service for SNCF trains. We were on
train 9249 (and being served a hot meal) a week earlier than this shot was taken 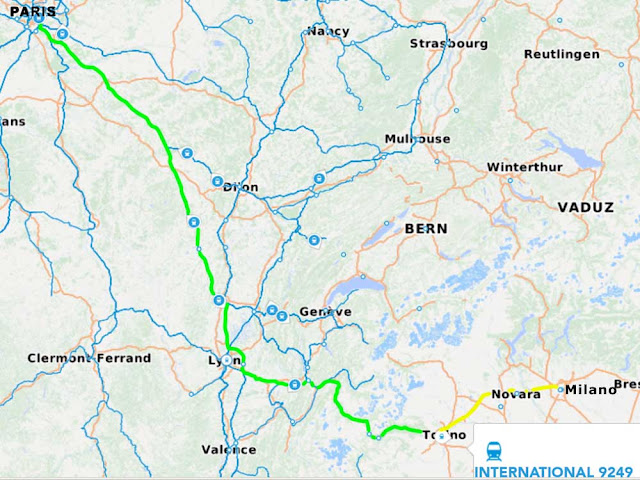 The train is fast to Lyon St Exupéry, with a maximum speed of 300km/h, but once you get onto the windey rails up in the mountains everything slows down - sometimes as slow as 40km/h. At least it gives plenty of opportunity to look at Alps. Once past Modane you travel under the Alps into Italy and more windey stuff before the ground levels out and the train gets up to 160km/h. The trip takes 7 hours (more or less).

An Italian Alp from a moving train 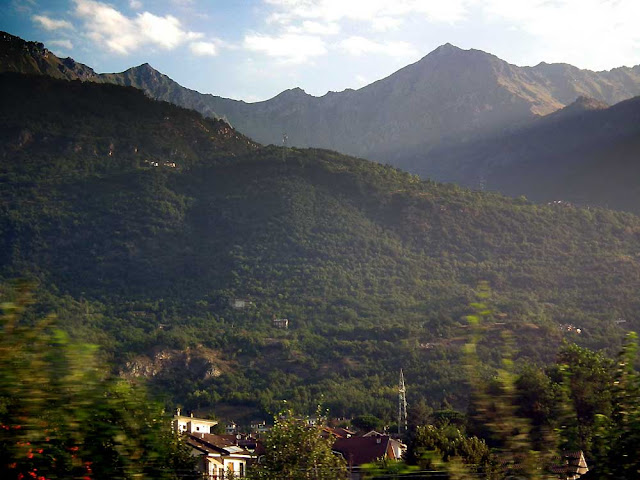 We love train travel, so much so that when we received an email saying that our return train was a bus replacement service from Milan to Modane we went to the SNCF Boutique in Milan and rebooked for an earlier train that wasn't affected. This cost us slightly more, but even though we had non-exchangeable tickets the penalty was waived by SNCF which kept the cost down. This is the second time we have been impressed by SNCF customer service in the past few weeks: other companies around here could learn from them.


If I was a sub atomic particle I could have proved Heisenberg wrong...
(aka the joys of GPS)

I still don't understand why Australia can't get their act into gear with fast train travel up the east coast. What's more in the land of sunshine and wind, we are still exploiting coal. We have so much hot wind but it comes out of Canberra.

I absolutely agree. It's because that whilst railways are mind bendingly expensive to build, roads and airports cost nothing at all....

and in the case of the US (and perhaps Australia), the money-in-politics people have a lock on promoting the idea of roads and airports -- and most taypayers don't realize how much they are subsidizing them.

I'd be thrilled if we had trains that consistently traveled at 100 mph.